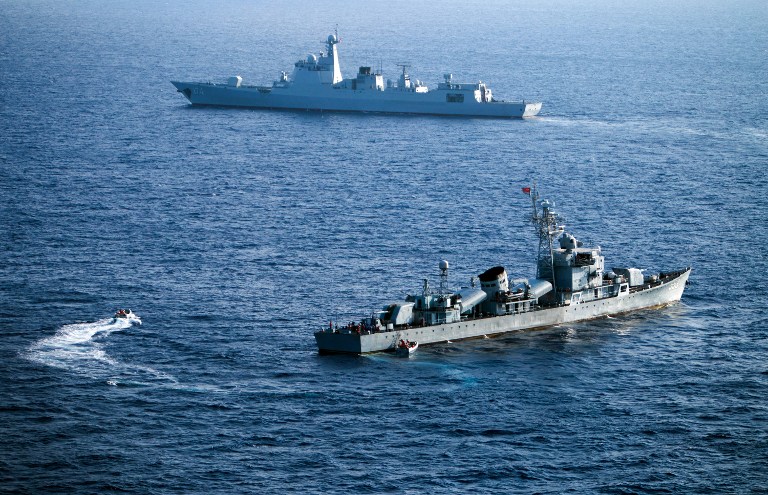 BEIJING, China – China on Friday, November 22, accused the US of “provocative” conduct after two US warships sailed near islands claimed by Beijing this week, adding to tensions between the global powers.

The US Navy regularly conducts “freedom of navigation operations” in the disputed South China Sea, where China, Vietnam, the Philippines, Malaysia, Brunei and Taiwan have competing claims.

“USS Gabrielle Giffords demonstrated that Mischief Reef, a low-tide elevation in its natural state, is not entitled to a territorial sea under international law.”

China dispatched military vessels to identify and monitor the US ships and warned them to leave, the People’s Liberation Army Southern Theatre Command said in a statement Friday.

“Recently, the US has used the pretext of ‘freedom of navigation’ to frequently send warships to the South China Sea area to cause trouble,” the statement said.

“We urge the US to cease this kind of provocative, risky conduct, to prevent unforeseen incidents.”

Mommsen said the operations were designed to “demonstrate that the United States will fly, sail, and operate wherever international law allows – regardless of the location of excessive maritime claims and regardless of current events”.

Washington and Beijing are locked in a bruising trade war and have tussled over diplomatic issues, including a bill passed by the US Congress this week in support of pro-democracy protests in Hong Kong.

China has laid claim to nearly all of the South China Sea and has built numerous military outposts on the small islands and atolls of the region, angering other claimants.

In recent months, the US military has stepped up its freedom of navigation operations or “FONOPS” in the region, irking Beijing but not sparking any direct confrontation thus far.

China has effectively drawn a property line around the whole of the Paracels archipelago – which it calls the Xisha Islands – to claim the entire territory.

But the United States says that does not accord with international law on archipelagos and territorial seas. – Rappler.com