Nov 22, 2019 11:42 PM PHT
Agence France-Presse
Facebook Twitter Copy URL
Copied
'If you are of the opinion that the Germany I want is not the one you want... then we should end it. Here, now and today,' Annegret Kramp-Karrenbauer of the CDU tells the party gathering in Leipzig 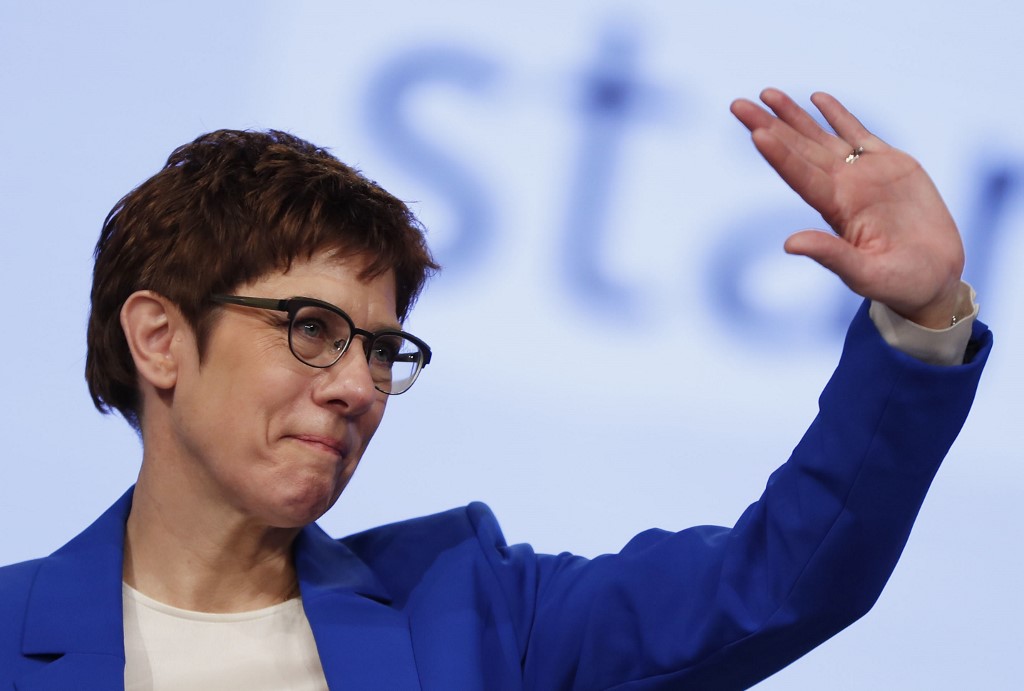 LEIPZIG, Germany –  Annegret Kramp-Karrenbauer, the under-fire leader of Germany’s ruling Christian Democrats (CDU), on Friday, November 22, threatened to quit, forcing her chief critic to back down and pledge his loyalty.

In a combative speech at the start of the CDU’s party congress, the 57-year-old challenged her critics to stand up and be heard if they disagreed with her leadership.

Widely known by her initials “AKK,” the defense minister has endured a rocky first year at the helm since taking over the party leadership from her mentor Chancellor Angela Merkel at last year’s conference.

With mutinous grumblings growing over her leadership style and criticisms of the coalition government, Kramp-Karrenbauer threw down the gauntlet.

“If you are of the opinion that the Germany I want is not the one you want… then we should end it. Here, now and today,” she told the party gathering in Leipzig.

“To stand here as a party and say that everything we have done in the last 14 years was wrong is not a good election strategy,” she warned.

The comments were a thinly-veiled barb at 64-year-old lawyer Friedrich Merz, who narrowly lost out to Kramp-Karrenbauer in last year’s leadership vote.

Merz, a delegate at this weekend’s conference, returned to the limelight in recent weeks when he described the CDU-led government as “abysmal” and accused Merkel of poor leadership.

But as AKK won a standing ovation lasting 7 minutes, and with party heavyweights lining up to praise her, Merz dramatically backed down.

“We are loyal to our party chairs and our party leadership, and to the government that we have carried for 50 years, and those were good years for Germany,” he told the congress.

While not wading directly into the war of words, Merkel had in her opening remarks urged the party to stay united, saying that it should “heed” the motto of the congress in past years – leading together and bringing together.

As Merkel nears the end of her fourth consecutive term, the CDU has been struggling to put down party infighting over her legacy and over the future shape of the party.

Pressure is also increasing on the centre-right party, as it has been struggling to halt a haemorrhage of voters to the Greens and to the far-right Alternative for Germany (AfD).

AKK’s own reputation has also suffered due to a string of PR gaffes.

In April, she was widely condemned for an ill-judged joke about transgender bathrooms. A month later, she incurred the wrath of Youtubers with an attack on freedom of speech online.

Recent surveys suggest Merz is a popular choice among Germans when it comes to who should run to succeed Merkel as chancellor at the next elections.

Traditionally a question that the CDU leadership decides behind closed doors with its Bavarian sister party CSU, there have been growing calls to involve the party base in the candidate selection process.

Ahead of the conference, six motions have been put forward on the introduction of a members’ vote or internal primaries.

However an outright coup attempt against AKK by Merz’s supporters remains unlikely according to Hans Vorlaender, a political scientist at Dresden’s Technical University.

“It is much too early for the CDU to make personnel decisions,” he told AFP, claiming that the party needed more time to prepare for life after Merkel, who is set to step down in 2021 after 16 years at the helm.

By showing her hand on Friday, AKK has also bought herself some time.