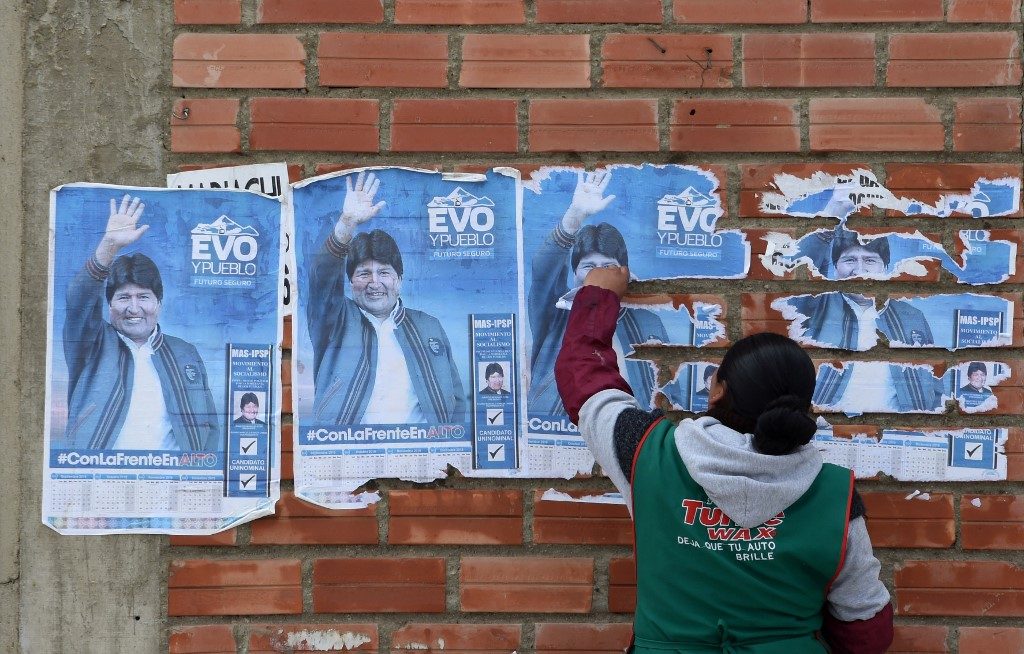 LA PAZ, Bolivia – Bolivia’s Congress approved a bill Saturday, November 23, that opens the door to new elections without ex-president Evo Morales, as the caretaker government met with protesters to end weeks of unrest.

At least 32 people have been killed in violence that erupted after a disputed election on October 20, with protesters’ blockades causing severe fuel and food shortages in La Paz and other cities.

Both houses voted in favor of the proposal after hours-long sessions. It will be sent to interim President Jeanine Anez, who has already said she will sign the bill into law at 1400 GMT Sunday.

Among other things, the bill annuls the results of the October 20 vote and allows for new elections to be held.

Crucially, it bars candidates who served in both of the two previous terms from seeking re-election for the same position. That would prevent Morales from contesting the presidency in the new ballot.

Congress also needs to agree on a new 7-member electoral court, after members of the previous panel were removed for allegedly manipulating results.

The tribunal will be tasked with setting a date for the new vote that Anez has previously vowed to hold “as soon as possible.”

“I want to thank our parliamentarians for having understood and listened to the demands of the Bolivian people,” Anez tweeted.

New elections are seen as key to ending Bolivia’s worst political upheaval in 16 years, which has deepened divisions between indigenous people loyal to Morales and Bolivia’s mainly city-dwelling middle and upper classes.

Morales’ Movement for Socialism (MAS) party holds a majority in both houses of Congress, but is divided over the left-wing leader and his political future.

While some supporters would remain loyal to Morales, members of his party “will try to save MAS without Evo Morales in order to be an option in the next elections,” Carlos Toranzo, a political analyst, told Agence France-Presse.

Morales, who had been seeking a 4th term, claimed he won last month’s election, but opposition groups said the vote count was rigged.

An audit by the Washington-based Organization of American States found irregularities in the results.

The Congress vote comes a day after the caretaker government filed a criminal complaint accusing Morales – Bolivia’s first indigenous president who served for nearly 14 years – of “sedition and terrorism,” after he allegedly called on supporters to maintain blockades.

If Morales – who fled to Mexico after resigning on November 10 – were to be charged and convicted, he would face a maximum penalty of 30 years in jail.

His former top minister Juan Ramon Quintana, whose whereabouts are unknown, is also accused of the same crimes.

Morales, who claims to have been a victim of a coup after losing the support of the security forces, tweeted Friday – several hours before Interior Minister Arturo Murillo referred the case to federal prosecutors – that the investigation was based on “planted evidence and manipulated recordings.”

An attempt by MAS senators on Saturday to prohibit “judicial processes” against Morales was rejected outright by Anez, who told reporters that anyone “who has committed crimes, has mocked the law, has committed abuses, will not have any amnesty.”

Two children of Morales – Evaliz Morales Alvarado and Alvaro Morales Peredo – left Bolivia on Saturday and arrived in Argentina after being given the green light by the interim government.

Morales tweeted Saturday that Evaliz had been accused of “illicit enrichment,” which he said was a lie.

Anez, a right-wing senator who declared herself caretaker leader on November 12 after Morales quit, called on anti-government protesters to “let us govern” and lift the road blocks on Friday.

In a potential breakthrough in the crisis, the government announced late Friday that it would meet with various opposition groups at the presidential palace on Saturday.

Meanwhile the situation began to normalize, with fuel supplies reaching some gas stations.

It comes after police on Thursday tear-gassed indigenous protesters who marched on La Paz with the coffins of five of the eight people killed in clashes at a key fuel plant Tuesday.

The United States has suggested that Morales stay out of upcoming elections, which should be “free, fair and transparent.” – Rappler.com