Nov 24, 2019 11:24 PM PHT
Agence France-Presse
Facebook Twitter Copy URL
Copied
The rallies have continued, waning on some days but swelling again, despite the bloodshed, when demonstrators have felt politicians are stalling 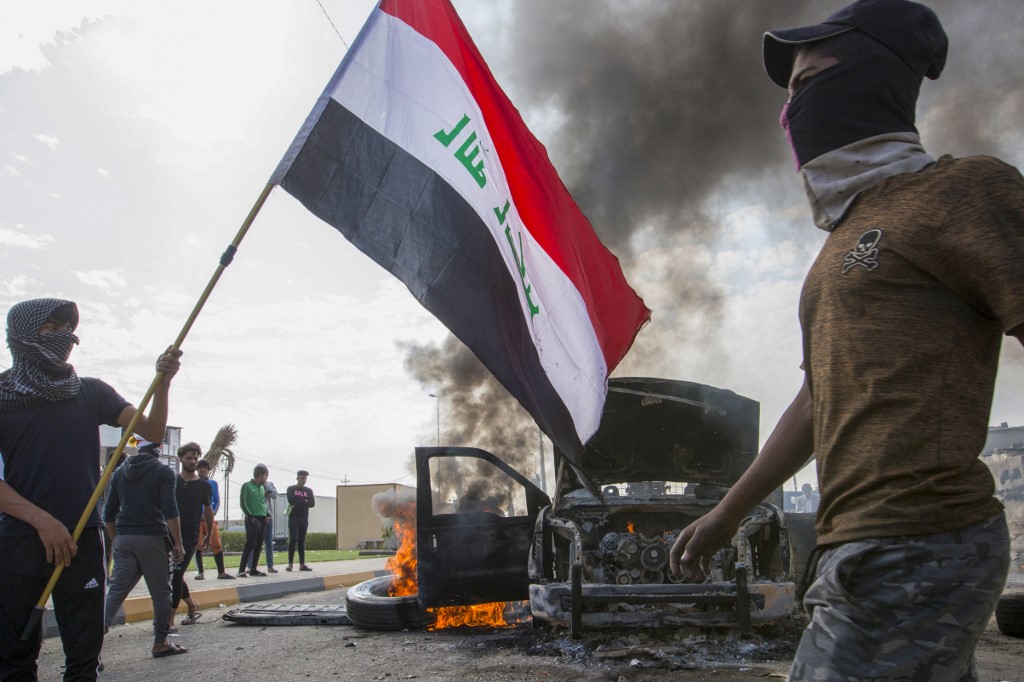 NASIRIYAH, Iraq – Six protesters were killed on Sunday, November 24, in Iraq’s south where angry demonstrations turned up the heat on a paralyzed government facing the country’s largest grassroots movement in decades.

Three demonstrators died and around 50 were wounded in clashes with security forces near the key southern port of Umm Qasr, the Iraqi Human Rights Commission reported.

An Agence France-Presse (AFP) correspondent said security forces had fired live rounds at protesters trying to block access to the port, a vital lifeline for food and medicine imports as well as energy exports.

Hours earlier, before dawn, 3 protesters were shot dead and at least 47 wounded by security forces in Nasiriyah, some 300 kilometers (200 miles) south of the capital Baghdad, medical sources said.

Protesters there blockaded 5 main bridges over the Euphrates River, shut down schools and burned tyres outside public offices.

They blocked access to oil fields and companies around the city, torching as well its Shiite endowment centre, a government body that manages religious sites.

Since October 1, Iraq’s capital and majority-Shiite south have been swept by mass rallies against corruption, a lack of jobs and poor services that have escalated into calls for a complete overhaul of the ruling elite.

Top leaders have publicly acknowledged the demands as legitimate and promised measures to appease protesters, including hiring more civil servants, reforming the electoral system and reshuffling the cabinet.

But the rallies have continued, waning on some days but swelling again, despite the bloodshed, when demonstrators have felt politicians are stalling.

“We are not afraid of threats,” said one protester, Salem Hassan, in the southern city of Amara.

“We cannot remain silent in the face of the barbarism of the leaders and the time they take to satisfy our demands.”

An estimated 350 people have been killed and thousands wounded since October 1, according to a tally compiled by AFP as authorities no longer provide updated figures.

Iraq’s south, a rural area where tribal allegiances are strong, has carried the torch of the movement for weeks, with students and teachers leading rallies outside schools and public offices.

The education ministry issued a directive for schools to open normally on Sunday, the first day of the work week in Iraq, but protesters in Nasiriyah defied the order and shut down schools anyway, AFP’s correspondent said.

In the oil-rich southern city of Basra, demonstrators blocked main roads, including those leading to the ports of Umm Qasr and Khor al-Zubair.

The two sides lobbed Molotov cocktails at each other from behind barricades set up in small alleyways.

“They’re throwing Molotov cocktails at us and at midnight they started shooting live rounds,” one demonstrator said about the security forces.

In the night-time clashes, the streets were lit only by fires from the makeshift incendiary weapons, and by green laser pointers used by demonstrators to harass riot police.

“Our demands are clear,” said a demonstrator, his face wrapped in a black scarf.

“The downfall of this corrupt government.”

Iraq is the 12th most corrupt country in the world, says Transparency International, a key driver of the popular anger behind the mass protests.

Iraq’s cabinet is currently discussing the 2020 budget before it is submitted to parliament and government sources say it is expected to be one of the country’s largest yet.

Sunday’s violence came a day after the surprise visit of US Vice President Mike Pence to Iraq, where he dropped in on American troops stationed in the country’s west and met top leaders in the Kurdish region in the north.

He did not, however, meet officials in Baghdad, with officials citing “security reasons.”

Washington and Baghdad have been close allies since the US-led 2003 invasion that toppled ex-dictator Saddam Hussein, but ties are now at their coldest in years, officials from both countries have told AFP. – Rappler.com