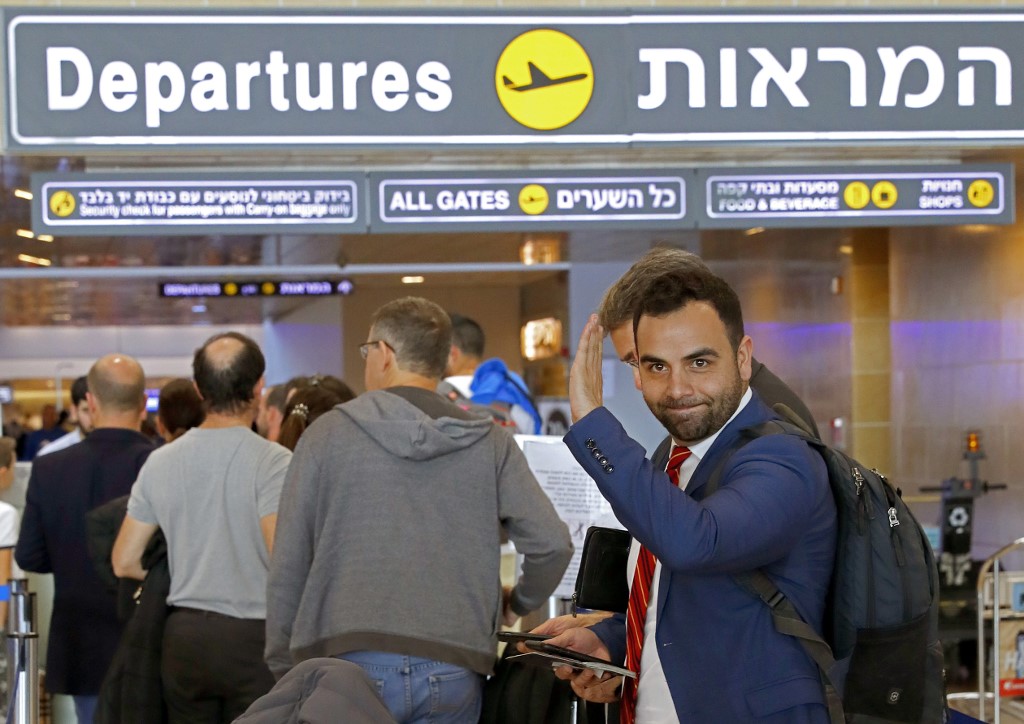 TEL AVIV, Israel – Israel expelled the country director of Human Rights Watch on Monday after a lengthy court battle, sparking criticism that it was seeking to crush dissent.

It accused American citizen Omar Shakir, the New York-based rights group’s director for Israel and the Palestinian territories, of supporting a boycott of the Jewish state, claims he denies.

The 35-year-old arrived at Ben Gurion Airport near Tel Aviv on Monday afternoon, where he was greeted by around 20 supporters.

“Today culminates a two-and-a-half year effort to deport me over my human rights advocacy, an effort to muzzle Human Rights Watch,” Shakir said at the airport.

“One day you will welcome me here, I hope, when it is a better day – a day in which all people, Israeli and Palestinian, have their human rights respected.”

He flew out on Monday evening.

Authorities said Shakir’s expulsion was the first from inside Israel under its 2017 law allowing the deportation of foreigners who support a boycott.

The European Union, United Nations and others had called on Israel to reverse course, with the UN warning of a “shrinking space for human rights defenders to operate” in Israel and the Palestinian territories.

But the United States, Israel’s closest ally, said only that it supported freedom of expression worldwide.

HRW said Shakir would continue in his position despite being expelled, working from neighboring Jordan.

It said Israel was the first functioning democracy to expel one of its staff.

Israel refused to extend Shakir’s work permit in May 2018 after parliament passed a law mandating the expulsion of foreign supporters of the Boycott, Divestment and Sanctions (BDS) movement.

BDS activists call for a wide-ranging embargo of Israel over its treatment of the Palestinians.

Israel sees the movement as a strategic threat and accuses it of anti-Semitism.

Activists strongly deny this charge, comparing the embargo to the economic isolation that helped bring down apartheid in South Africa.

The Ministry of Strategic Affairs, which pushed to expel Shakir, said Monday, November 25, that Israel, “like any sane country, has the right to decide who is given the freedom to enter and work within its borders”.

It labelled him “an active BDS propagator who zealously promotes boycotts”.

“It is an alarming wake-up call to all those who seek peace and justice for both sides that Israel will resort to extreme measures to hide the truth,” she said in a statement.

The case against Shakir was initially based on statements he had made supporting a boycott before joining HRW.

But the government also highlighted work he did with the rights groups, including criticizing Israeli settlements in the occupied West Bank.

Shakir, who started in the HRW Israel post in 2017, appealed the deportation but Israel’s supreme court backed the government earlier this month.

Israel disputes this, and the United States last week broke with decades of international consensus and announced it no longer considered the settlements illegal.

“It is hard to imagine Omar’s deportation going ahead if the US government hadn’t given a kind of implicit green light,” he told AFP.

The American embassy said only that it had raised Shakir’s case with Israel and that it supports “freedom of expression”.

“At the same time, our strong opposition to boycotts and sanctions of the State of Israel is well known,” it said.

“It’s the singling out we disagree with,” said Gerald Steinberg, head of the organization.

But Steinberg also admitted that Israel’s move had created negative publicity that helps its critics.

“This is playing into their hands,” he said. – Rappler.com