Nov 26, 2019 4:21 PM PHT
Agence France-Presse
Facebook Twitter Copy URL
Copied
(UPDATED) The worst damage is in and around the coastal city of Durres, where soldiers, police and civilian forces were working to reach those believed to be trapped inside buildings that were reduced to dust 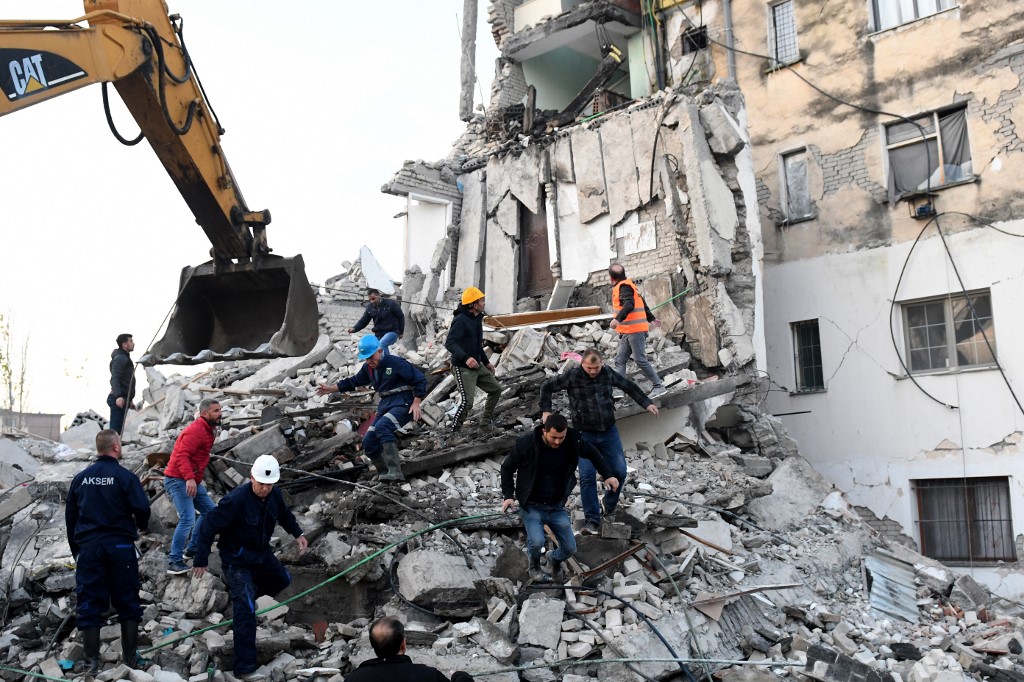 DURRES, Albania (3rd UPDATE) – Albanian rescuers were digging through rubble as desperate survivors trapped in toppled buildings cried out for help Tuesday, November 26, after the strongest earthquake in decades claimed at least 13 lives.

The 6.4 magnitude quake struck at 3:54 am local time (0254 GMT), with an epicentre 34 kilometers (about 20 miles) northwest of the capital Tirana in the Adriatic Sea, according to the European-Mediterranean Seismological Centre.

A total of 13 people have now been found dead, according to the defense ministry, while around 38 people have been rescued alive.

The worst damage was in and around the coastal city of Durres, a tourism destination on the Adriatic, where soldiers, police and civilian forces were working to reach those believed to be trapped inside buildings that were reduced to dust.

Many of the dead were pulled from the ruins in Durres and the nearby town of Thumane.

Families looked on in horror as emergency workers sifted through the rubble of a collapsed five-storey building in Thumane, as those trapped cried out to be rescued.

Relatives shouted the names of their loved ones still inside: “Mira!”, “Ariela!”, “Selvije!”.

A survivor, a thin man covered in grey dust, was seen carried out on a stretcher.

Dulejman Kolaveri, a man in his 50s in Thumane, told AFP he feared his 70-year-old mother and six-year-old niece were trapped, because they lived on the fifth floor of the building.

“I don’t know if they are dead or alive. I’m afraid of their fate… only God knows,” he said with trembling hands.

Arben Allushi, another Thumane local, told AFP with tears in his eyes that his wife and niece were in the building when it fell.

Not far away in Kurbin, a man is his fifties died after jumping from his building in panic, the ministry said. Another perished in a car accident after the earthquake tore open parts of the road, it added.

Some 300 soldiers have been sent to Durres and Thumane, defence ministry spokeswoman Qahajaj said, while around 1,900 police officers have also been deployed to help.

The European Commission said on Twitter that “rescue teams from Italy, Greece and Romania are already on their way” to assist the rescue efforts.

Albania is known for its chaotic urban planning, particularly in coastal spots popular with tourists where many buildings have been constructed without proper permits and safety regulations.

“It’s terrible. It’s horrible. We hope they’ll get them out alive,” said Astrit Cani, a 25-year-old resident, as tearful relatives looked on.

Speaking to local television in Durres, one resident said his daughter and niece were trapped in a collapsed apartment building.

“I talked with my daughter and niece on the phone. They said they are well and are waiting for the rescue. I could not talk to my wife,” he said.

In Tirana, panicked residents ran out onto the streets and huddled together in the darkness when the quake struck.

The tremors were felt across the Balkans, from Sarajevo in Bosnia to the Serbian city of Novi Sad almost 700 kilometres away, according to reports in local media and on social networks.

The quake was followed by several aftershocks, including one of 5.3 magnitude, the European-Mediterranean Seismological Centre said. Albanian Authorities described it as the strongest earthquake in the last 20-30 years.

The Balkans is an area prone to seismic activity and earthquakes are frequent. – Rappler.com