Nov 28, 2019 7:31 AM PHT
Agence France-Presse
Facebook Twitter Copy URL
Copied
To mock those questioning his health, US President Donald Trump tweets a picture with his head superimposed on the hulking body of a boxer – an image taken from the publicity poster for the Sylvester Stallone movie 'Rocky III' 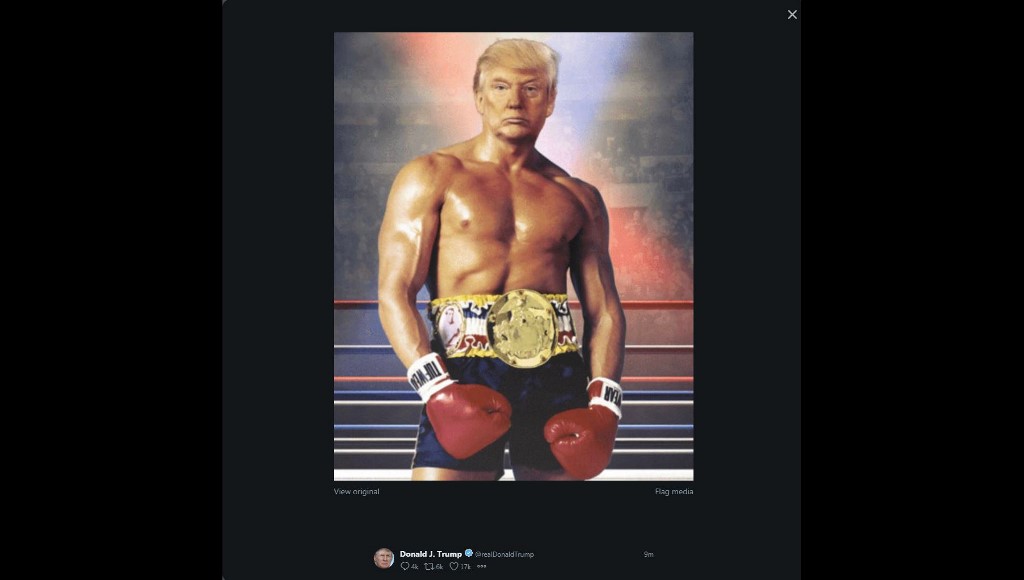 WASHINGTON DC, USA – Days after causing alarm with an unscheduled trip to the hospital, President Donald Trump tweeted a photoshopped image of himself Wednesday, November 27, as a rippling, bare-chested boxer.

The president is furious over media speculation following his sudden trip to a government hospital outside Washington last Saturday, November 23, and the startling tweet was his latest attempt to put talk of ill health to rest.

In the picture, Trump’s head is superimposed on the hulking body of a boxer – an image taken from the publicity poster for the Sylvester Stallone movie “Rocky III.”

The montage, in which a distinctly airbrushed version of the 73-year-old president’s face is used, comes without comment.

Not that the Republican real estate tycoon is shy on the subject. He rarely misses a chance to talk up his own physical prowess and often makes unscripted comments – flattering or derogatory – about the physique of other men, often to their face during official events.

On Tuesday, November 26, while giving a reelection campaign speech in Florida, Trump fumed at length in a bizarre rant about his recent hospital visit.

He claimed, wrongly, that major media outlets were reporting he’d had a “massive” heart attack when he was taken, without prior notice, to the Walter Reed military hospital.

In fact, most media questioned the unusual circumstances of the visit, which would usually have been flagged in advance. The White House said afterward that Trump had simply decided to do part of his annual physical exam early, in order to save time later.

According to his last medical exam, in February, Trump is technically obese but in good health. He rarely exercises, other than playing golf – as he did at his Mar-a-Lago resort in Florida on Wednesday.

‘Take off your shirt, sir’

At the campaign rally, Trump told supporters that false media reports of a heart attack sparked worry among staff back in the White House.

But in the hospital, he claimed, doctors had only had one overriding concern – to witness his spectacular physique.

“The first thing they do is say, ‘Take off your shirt, sir, and show us that gorgeous chest. We’ve never seen a chest quite like it,'” he said.

Aside from praising his own chest, Trump launched into a description of the muscles of Republican Florida Governor Ron DeSantis – a man Trump explained he previously thought had been fat.

“One day I am with him and I pat him on the shoulder and I go, whoa! That’s strong,” Trump recalled to the crowd of thousands.

“That’s a lot of muscle there. My hand didn’t sink in like it does with a lot of people. And then I see him without a shirt one day, and this guy is strong. He’s not fat. That’s all power. That’s all muscle. I want to tell you that.”

Trump has previously on frequent occasions expressed scorn for opponents’ small hands or admiration for the big hands of visitors to the White House and others.

He has also attacked female antagonists with lurid physical insults, including “horse face,” while Adam Schiff, one of the top Democrats in the Trump impeachment probe, is branded “pencil neck.”

The tweeted photo of a hunky Trump drew instant and sustained mockery online, as well as retweets from the president’s admirers, who enjoy the way he has brought showmanship into the White House.

“Now we know what they did to him at that mysterious doctor’s visit?” quipped NBC News anchor Andrea Mitchell over the faked Trump boxer. – Rappler.com