Nov 28, 2019 8:25 AM PHT
Agence France-Presse
Facebook Twitter Copy URL
Copied
Some protesters in Bogota, the captial, bang pots and pans as they made their way through the streets. Large demonstrations are also held in Cali and Medellin. 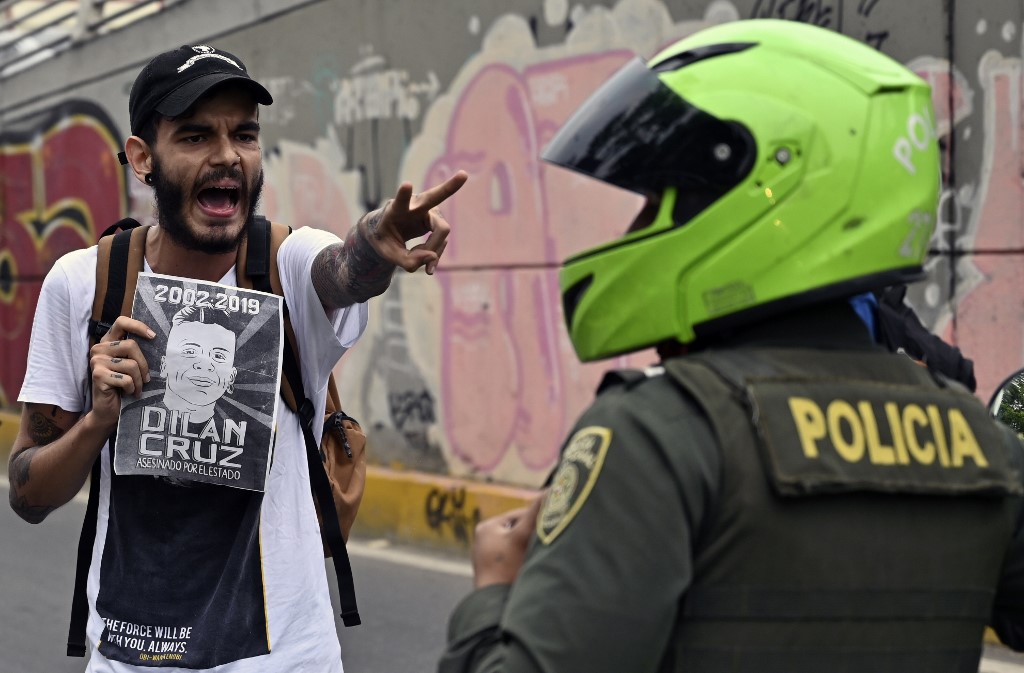 BOGOTA, Colombia – Colombian unions marked their second general strike in a week on Wednesday, November 28, as tens of thousands poured onto the streets in protest against the government of right-wing President Ivan Duque.

Public transport was largely shut down and shops and offices closed in the center of the capital as a series of protests that began with a 250,000-strong march last Thursday continued for a seventh consecutive day.

Some protesters banged pots and pans as they made their way through the streets. Large demonstrations were also held in Cali and Medellin.

“We are outraged by so much mistreatment and so much corruption,” said David Martinez, a 50-year-old public employee who joined a march in Bogota dressed as a clown.

“I’m dressed as a clown because that’s how the government sees us. People have risen up in Ecuador, Chile, in Bolivia, now it’s our turn to say: No More!” Martinez told AFP.

The protests have been largely peaceful but sporadic violence has left 4 dead – including a young man who died Monday, November 25, after being wounded in clashes with riot police on Saturday. Some 500 people have been injured.

Police said 184 people had been detained in the protests since last week.

“They have turned Colombia into a democracy where they favor a minority of businessmen and bureaucrats, while the vast majority must try to hang on to their privileges,” teachers union Fecode said in a statement.

Duque, under fire over his economic policies and corruption, launched a “national dialogue” Sunday, November 25, with mayors and other officials in a bid to assuage popular anger.

However, protest leaders reacted angrily when they were initially omitted from direct talks.

US Secretary of State Mike Pompeo voiced “steadfast support” for Duque’s government in a phone call to the beleaguered president on Wednesday, the State Department said.

Pompeo “welcomed the national conversation that President Duque has convened in Colombia in response to recent demonstrations,” it said.

A Gallup poll published on November 7 showed Duque’s approval ratings at 26% in October, the lowest since he took office in August 2018, while 70% of respondents believe the country is heading in the wrong direction.

The National Strike Committee – which groups unions, students, university lecturers and indigenous groups – presented a list of 13 demands to the government, including the withdrawal of Duque’s proposed tax reforms, and full compliance with the 2016 peace deal with FARC guerrillas.

But perhaps the most controversial is the call to dismantle the feared ESMAD riot police, after the death Monday of 18-year-old protester Dilan Cruz, who was hit in the head by a tear gas canister.

Duque has yielded to some of the demands on tax reform, announcing the return of Value Added Tax to the poorest 20% of the population and benefits for companies that hire young people.

“This government is open building towards the future, but it must be done with the whole of society,” Duque said in an interview with Colombia’s W Radio, insisting that many of the protesters claims were based on disinformation or “false premises.” – Rappler.com