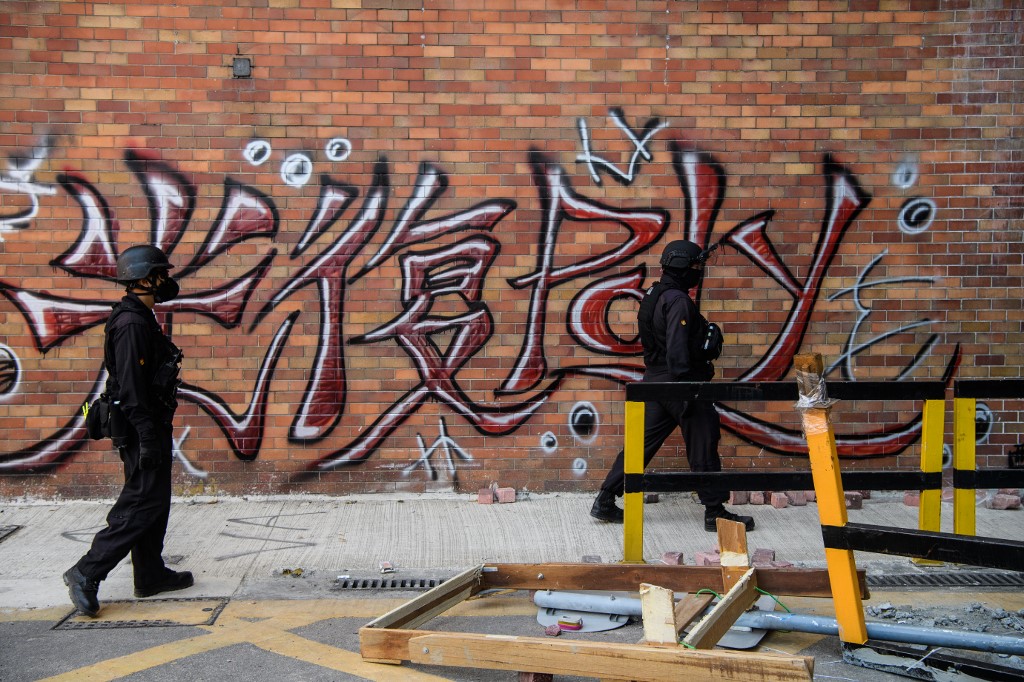 HONG KONG – Hong Kong police on Thursday, November 28, entered a ransacked university campus where authorities faced off for days with barricaded pro-democracy protesters, looking for petrol bombs and other dangerous materials left over from the occupation.

The Hong Kong Polytechnic University became the epicenter of the territory’s increasingly violent protest movement when clashes broke out on November 17 between police and protesters armed with bows and arrows as well as Molotov cocktails.

The standoff settled into a tense stalemate during which hundreds fled the campus – some making daring escapes, others caught and beaten by officers during failed breakouts – leaving a dwindling core of holdouts surrounded by police cordons.

But in recent days, the last few people barricaded in the campus seemed to disappear.

University staff said they were only able to find a single protester on campus and reporters there struggled to see any major presence in the last 48 hours.

Late Wednesday, a lone masked man spoke to reporters inside the campus saying some 20 protesters remained.

But there was no sign of them on Thursday morning when police and firefighters moved in, 11 days after the siege began, for what was billed as an operation to secure dangerous objects now littering the once placid campus and to collect evidence.

During the November 17 battle, the sheer volume of petrol bombs thrown by protesters succeeded in stopping police officers and crowd control vehicles from breaking through the barricades, forcing the stalemate that led to the siege.

Throughout Thursday riot police in tactical gear began gathering hundreds of discarded petrol bombs and bottles of chemicals that had been looted from the university laboratories as well as archery bows.

Explosives experts went from room to room followed by a gaggle of reporters, passing walls daubed with graffiti insulting the city’s police force and calling for greater freedoms under Chinese rule.

Officers gathered a rapidly growing pile of items in a courtyard, from half-full jerry cans of petrol, to Molotovs made out of wine bottles and various chemicals in brown glass bottles.

They were carefully labelled and placed in boxes before being taken away.

Police spokesman Chow Yat-ming said the priority for Thursday’s operation was not the arrest of any holdouts who might still be hiding.

“The objective is not about people, it’s about the dangerous items on campus,” he told reporters. “But if we encounter any protesters or any person remaining inside then we’ll try to convince them to seek medical treatment or even a body check-up.”

Swathes of the red-brick campus just a stone’s throw from the city’s famous harbour resemble an abandoned battleground covered in debris, barricades and the shattered bottles of Molotov cocktails.

A foul odor from rotting food in a canteen and overflowing garbage bins permeated parts of the campus.

A Starbucks on site has been trashed, its windows broken and counters daubed with graffiti. The coffee chain has become a target for protesters because its local subsidiary is owned by a family conglomerate perceived to be close to Beijing.

On Wednesday, university leaders called for the police to end their siege and for the government to help with the disposal of dangerous materials.

Hong Kongers have protested in huge numbers over the last six months fuelled by years of growing fears that authoritarian China is stamping out the city’s liberties.

Violence spiralled as Beijing and local leaders refused major concessions and the police were used to break up rallies on a daily basis.

Arrests have skyrocketed in recent weeks.

On Wednesday, security minister John Lee told lawmakers that some 5,800 people have been arrested since the protests first began in early June, with 923 charged so far.

In October, 1,189 people were arrested. But that figure has more than doubled to 2,619 up to November 21 at the height of the university siege.

Beijing and Hong Kong leader Carrie Lam have argued that a “silent majority” still supports the establishment and abhors the increased violence of radical protesters.

But that narrative was smashed by community-level council elections on Sunday which saw a landslide win for pro-democracy candidates across the city. – Rappler.com