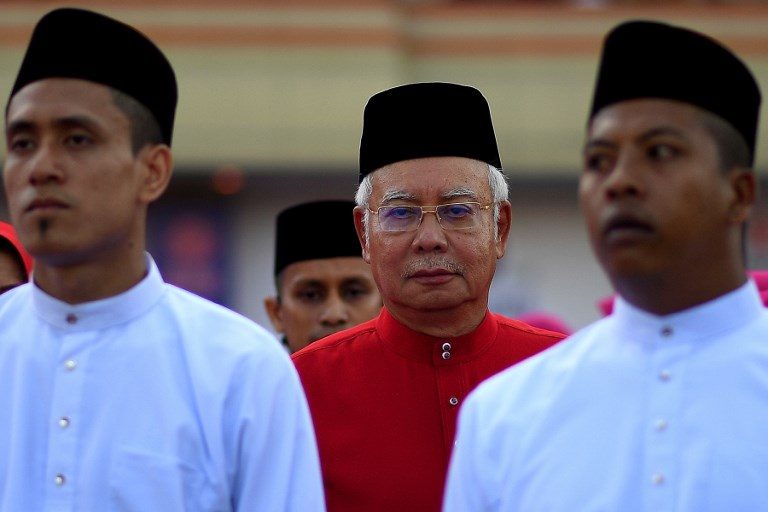 Facebook Twitter Copy URL
Copied
(UPDATED) Najib went on trial in April over the controversy, in a case centering on the transfer of $10.1 million from a former 1MDB unit into his bank accounts. He denies any wrongdoing.

KUALA LUMPUR, Malaysia (UPDATED) – Former Malaysian prime minister Najib Razak was a “victim” of the multi-million dollar 1MDB scandal that saw state coffers drained on his watch, his lawyer said Tuesday, December 3, as the ex-premier gave evidence in his own fraud trial.

Huge sums were stolen from sovereign wealth fund 1Malaysia Development Berhad (1MDB), allegedly by the ex-prime minister and his cronies, and spent on everything from high-end real estate to artwork.

Najib’s coalition was ousted at the polls last year after 6 decades in power, largely due to public anger over the scandal.

He has since been arrested and hit with dozens of charges linked to the looting of the investment vehicle.

“Najib is not part of the conspiracy. He is a victim as much as others in the 1MDB sandal,” his lawyer Muhammad Shafee Adbullah told reporters.

“The leader of the pack is Jho Low,” he said, referring to fugitive Malaysian financier Low Taek Jho, a member of Najib’s inner circle who allegedly masterminded the elaborate fraud that spanned from the United States to Switzerland, Dubai and Singapore.

“The crux of my defense is the entire scheme is designed by Jho Low,” Shafee added.

Najib, 66, went on trial in April over the controversy, in a case centred on the transfer of 42 million ringgit ($10.1 million) from former 1MDB unit SRC International into his bank accounts.

The former leader arrived at the court on Tuesday wearing a blue suit and held a brief Muslim prayer with supporters at the building’s steps.

Defense proceedings began with Najib giving testimony under oath. He will be cross-examined by prosecutors and is expected to be on the witness stand for around 4 days.

He began his testimony reading from a 243-page statement, recalling his long career in politics and ministerial posts he held since 1978, including the post of finance minister, and giving lengthy backgrounds on the setting up of 1MDB and SRC.

Defense lawyers had earlier said it would take two days for him to read the entire statement, but as his testimony went on, it appeared it would take longer.

Najib also sought to distance distance himself from Low, while his lawyer claimed the ex-leader was led astray.

“Jho Low has misled many people. Najib is one of them,” Shafee said. Prosecutors have argued Najib wielded huge influence over the unit and knew that stolen money was being funnelled from it into his accounts.

But in an opening statement in court before Najib took the stand, defense lawyer Shafee said they will prove that Najib “did not misappropriate funds… either directly or indirectly” and “did not act dishonestly”.

“Ultimately, we will pray for an order that (Najib) be acquitted and discharged of all 7 charges,” he said.

The case is one of several 1MDB-linked trials investigating Najib’s conduct. The biggest opened in August, centring on allegations he illicitly obtained over $500 million from the fund.

US authorities, who are also investigating the fraud as money was allegedly laundered through the American financial system, believe $4.5 billion was looted from the fund.

Here are more stories about the 1MDB scandal: