Democrats have made a forceful case that Trump should be impeached for trying to leverage a White House meeting and military aid to pressure Ukraine for dirt on an election rival.

(READ: Trump on trial: the road to impeachment)

In a theatrical, contentious hearing of the House Judiciary Committee – now tasked with weighing impeachment charges against the president – lawmakers listened to damning testimony from constitutional law professors. 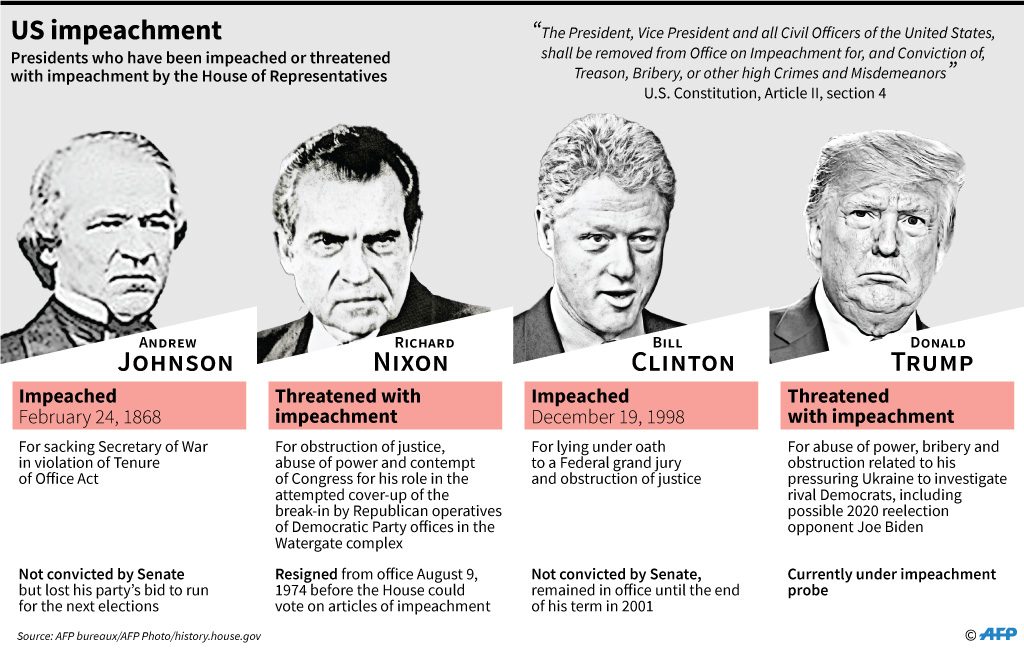 “On the basis of the testimony and evidence before the House, President Trump has committed impeachable high crimes and misdemeanors by corruptly abusing the office of the presidency,” Harvard Law School professor Noah Feldman told the hearing.

“We 3 are unanimous” in that view, jurisprudence professor Michael Gerhart of the University of North Carolina stated, referring to himself and fellow witnesses Feldman and Stanford Law School professor Pamela Karlan.

All 3 were invited by Democrats to testify.

Americans tuning in to the live broadcast witnessed clashes between Democrats and Republican Trump loyalists on the panel, who repeatedly forced procedural votes to stall the process.

The new phase of impeachment began a day after a congressional report on the high-stakes inquiry detailed “overwhelming” evidence of abuse of power and obstruction by the president.

The report mapped out a months-long scheme by Trump, his personal lawyer Rudy Giuliani, senior diplomats and White House staffers to pressure Ukraine’s president into investigating Joe Biden, the current favorite to win the Democratic nomination for the 2020 election.

Trump “was willing to compromise our security and his office for personal, political gain,” said Judiciary Committee chairman Jerry Nadler.

Trump’s alleged political crimes, including bribery and obstruction of justice and Congress, “are worse than the misconduct of any prior president,” Gerhart said.

“If Congress fails to impeach here, then the impeachment process has lost all meaning, and, along with that, our Constitution’s carefully crafted safeguards against the establishment of a king on American soil.”

White House spokeswoman Stephanie Grisham hit back on Twitter, claiming that “3 of 4 ‘experts’ in this sham hearing have known biases” against Trump.

The fourth, George Washington University Law School professor Jonathan Turley, the only expert chosen by Republicans, had a different assessment.

Turley argued there was “no evidence” that Trump acted with “corrupt intent.”

And he warned that partisan anger was compromising the inquiry.

“There’s so much more rage than reason,” Turley said.

“Impeachments have to be based on proof, not presumptions,” he said, adding that Democrats were rushing the process so quickly that they were not hearing from key players in the Ukraine scandal.

Turley and Republican panelists failed to acknowledge the stonewalling by the White House. Despite requests from Democrats, 12 current or former administration officials have refused to testify.

The president himself, in London for a NATO summit, lambasted his opponents for proceeding with impeachment hearings.

“What they are doing is a very bad thing for our country,” Trump said. “It’s a joke.”

Collins faced a scolding, however, from one of the scholars when he insinuated that they had not studied the evidence and testimony.

“I am insulted by the suggestion that as a law professor I don’t care about those facts,” Karlan said.

Karlan also squarely asserted that Trump’s alleged effort to withhold military aid until Ukraine committed to investigating Biden was grounds for removal – even though Kiev never conducted the probe.

“Soliciting itself is the impeachable offense,” she said.

The House Intelligence Committee report is expected to form the basis for the Judiciary Committee to draw up formal charges – articles of impeachment – that could include bribery, abuse of power, obstruction and contempt of Congress.

Democrats reportedly aim to have the articles presented for a vote to the entire House of Representatives by late December.

If they pass as expected, Trump would then stand trial for removal in the Republican-controlled Senate, where he is likely to be exonerated. – Rappler.com