Trump on quest for foreign wins – and drama – in election year

Dec 5, 2019 1:32 PM PHT
Rappler.com
Facebook Twitter Copy URL
Copied
2019 is year full of tosses and turns for the US president 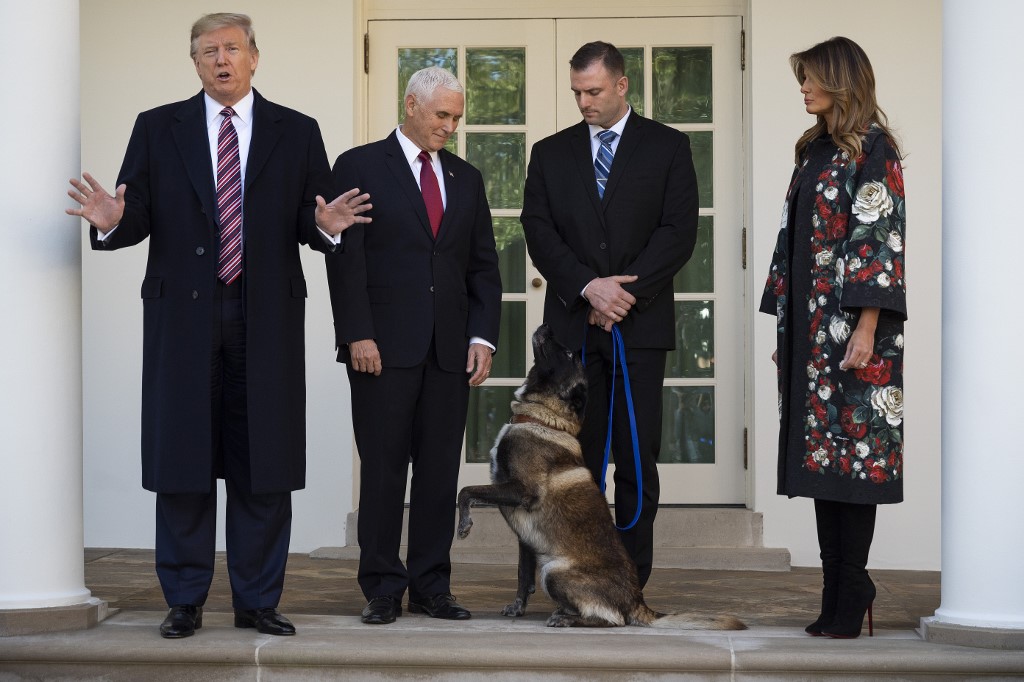 WASHINGTON DC, USA – President Donald Trump has shattered norms and niceties on the world stage in his nearly 3 years in office. Entering an election year, Trump is unlikely to slow down as he seeks what has largely eluded him – a headline-grabbing victory.

The tycoon-turned-president closes 2019 with a new stride after what was perhaps his most unambiguous achievement – the US commando raid that killed the leader of the Islamic State group, Abu Bakr al-Baghdadi.

But the year was also full of tosses and turns for Trump.

On his ambition to end the war in Afghanistan, he startled Washington by inviting the Taliban to talks, then declared the talks dead, and finally resumed them.

On North Korea, where Trump has hoped to secure a landmark accord, a highly anticipated summit with leader Kim Jong-un ended in stalemate. (READ: North Korea ‘no longer interested’ in summits with U.S. – KCNA)

Trump later jumpstarted diplomacy with a hastily arranged new meeting, only to see the talks languish as Pyongyang fires rockets and issues threats.

Even more tumultuous has been Trump’s aggressive trade push on China.

Expectations have repeatedly risen and then waned that the world’s two largest economies can reach a deal that would cancel tariffs on billions of dollars worth of goods.

In a rare issue that has drawn criticism from his Republican allies, Trump also sent mixed messages on Turkey, ordering a US troop withdrawal from Syria that paved the way for Ankara to attack US-allied Kurdish fighters before Trump pressured the NATO ally with sanctions.

Beyond the hotspots, Trump may have broken the most ground with his style, hobnobbing with some of the world’s most autocratic leaders even as he clashes with many close allies, as seen in his testy exchanges at the December NATO summit.

He has torn through the international consensus by withdrawing from the Paris climate accord and a European-backed denuclearization pact with Iran, and by unabashedly seeking to boost Israel’s right-wing leader, Benjamin Netanyahu.

In a mirror of his domestic agenda in which slashing immigration is a top priority, Trump has cast himself as the unique leader who stands up to the long-accepted status quo.

Heading on his NATO trip, Trump spoke first not of the security challenges of Russia, Syria or Afghanistan but of allies he says contribute less than their fair share.

The 2020 White House campaign opens under the shadow of impeachment, with House Democrats saying Trump abused his power by delaying aid to Ukraine as he pushed Kiev to investigate domestic opponent Joe Biden.

But Brian Katulis, a senior fellow at the left-leaning Center for American Progress, called foreign policy the “sleeper issue” of the election with the theatrical Trump likely to find a way to put it at the forefront.

“This is a reality-TV presidency. Even if he doesn’t achieve major successes, he will claim that he has,” he said.

“He will use other countries and their leaders as props in his re-election campaign.”

“We have seen 99% of ISIS territory taken away in Iraq and Syria. There’s still a job to be done but this is a very, very big-scale achievement,” he said.

“Trump’s foreign policy is forward-looking and not isolationist,” Gardiner said, adding that European leaders “are preparing for the very strong possibility of Trump’s reelection.”

Gardiner argued that Trump had also “significantly weakened” Iran, where anti-government protests have erupted in the wake of sweeping US sanctions.

Critics say the hard line has been counterproductive by reducing Iran’s compliance with the 2015 nuclear accord and encouraging the clerical regime to hit back in the region.

Closer to home, Katulis expected Trump to put a key focus in 2020 on congressional passage of the United States-Mexico-Canada Agreement, a trade pact similar in substance to the North American Free Trade Agreement, which Trump had denounced.

“Whether Congress passes the new NAFTA or if he looks to problems that need tending to, like Iran and North Korea, he will try to find at least some figment of a victory to say that he did something different from his predecessors,” Katulis said.

“With Trump, you can expect the unexpected.” – Rappler.com