Trump likely to face at least 3 articles of impeachment 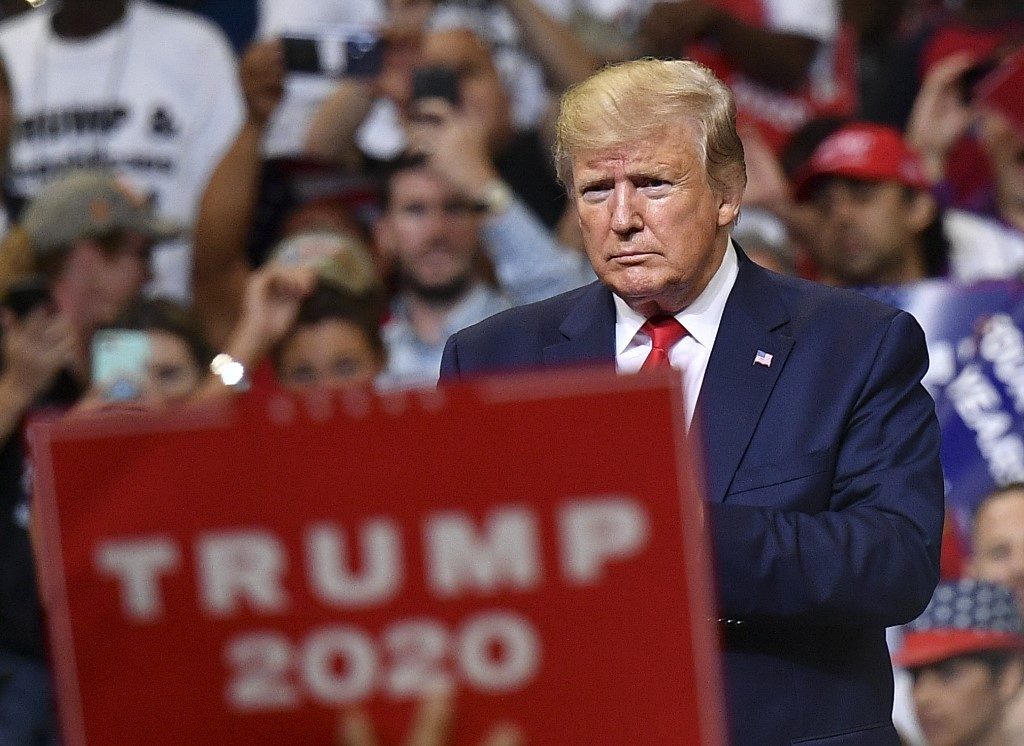 Facebook Twitter Copy URL
Copied
At a hearing of the House Judiciary Committee, 3 constitutional scholars called as witnesses by the Democrats outlined the possible articles of impeachment which Trump could face

WASHINGTON DC, USA – US President Donald Trump is likely to face at least 3 articles of impeachment in the Democratic-controlled House of Representatives.

Democratic speaker Nancy Pelosi announced on Thursday, December 5, that she had asked for articles of impeachment to be drawn up against the 45th president by the House Judiciary Committee.

The Democratic-controlled panel will then vote on the articles which, if passed, will be presented to the full 435-member House, where Democrats enjoy a majority.

If Trump is impeached by the House he will face a trial in the Senate, where Republicans currently hold 53 seats to the Democrats’ 47.

Article II, Section 4 of the US Constitution outlines the grounds for impeaching a president.

“The President, Vice President and all civil Officers of the United States, shall be removed from Office on Impeachment for, and Conviction of, Treason, Bribery and other high Crimes and Misdemeanors,” it states.

At a hearing of the House Judiciary Committee on Wednesday, December 4, 3 constitutional scholars called as witnesses by the Democrats outlined the possible articles of impeachment which Trump could face.

Abuse of Power and Bribery

Trump is accused of abusing the power of his office by asking Ukrainian President Volodymyr Zelensky to open an investigation into Democrat Joe Biden, his potential opponent in the 2020 presidential election.

“The solicitation constituted an abuse of the office of the presidency because President Trump was using his office to seek a personal political and electoral advantage over his political rival,” said Noah Feldman, a law professor at Harvard University. “This act on its own qualifies as an impeachable high crime and misdemeanor.”

“By freezing aid to Ukraine and by dangling the promise of a White House visit (to Zelensky), the president was corruptly using the powers of the presidency for personal political gain,” he added.

“Both of these acts constitute high crimes and misdemeanors impeachable under the Constitution,” Feldman said.

Another witness, Stanford University law professor Pamela Karlan, said “drawing a foreign government into our election process is an especially serious abuse of power because it undermines democracy itself.”

Michael Gerhardt, a University of North Carolina law professor, said Trump’s “serious misconduct” includes bribery because he was “soliciting a personal favor from a foreign leader in exchange for his exercise of power.”

Trump’s refusal to comply with congressional subpoenas issued by House impeachment investigators could form the basis of a charge of obstruction of Congress.

“The President has refused to comply with and directed at least 10 others in his administration not to comply with lawful congressional subpoenas,” Gerhardt said.

“Other presidents have done just the opposite in recognizing the legitimacy of congressional investigative and impeachment authorities.

“The power to impeach includes the power to investigate, but, if the president can stymie this House’s impeachment inquiry, he can eliminate the impeachment power as a means for holding him and future presidents accountable for serious misconduct,” Gerhardt said.

The articles of impeachment for obstruction of justice may stem from the report released earlier this year by special counsel Robert Mueller.

Mueller declined to recommend obstruction charges against Trump, but the House may do so, citing events outlined in the special counsel’s report.

“The Mueller Report found at least 5 instances of the president’s obstruction of the Justice Department’s criminal investigation into Russian interference in the 2016 election,” Gerhardt said.

He said the instances included Trump’s attempt to have Mueller fired, dangling pardons for former top aides and intimidating his former personal attorney Michael Cohen to prevent him from testifying. – Rappler.com