Dec 7, 2019 8:49 AM PHT
Agence France-Presse
Facebook Twitter Copy URL
Copied
Ukrainian President Volodymyr Zelensky and Russian President Vladimir Putin will meet in Paris on Monday for the summit, with French and German leaders mediating, in a bid to revive efforts to end Europe's only active war 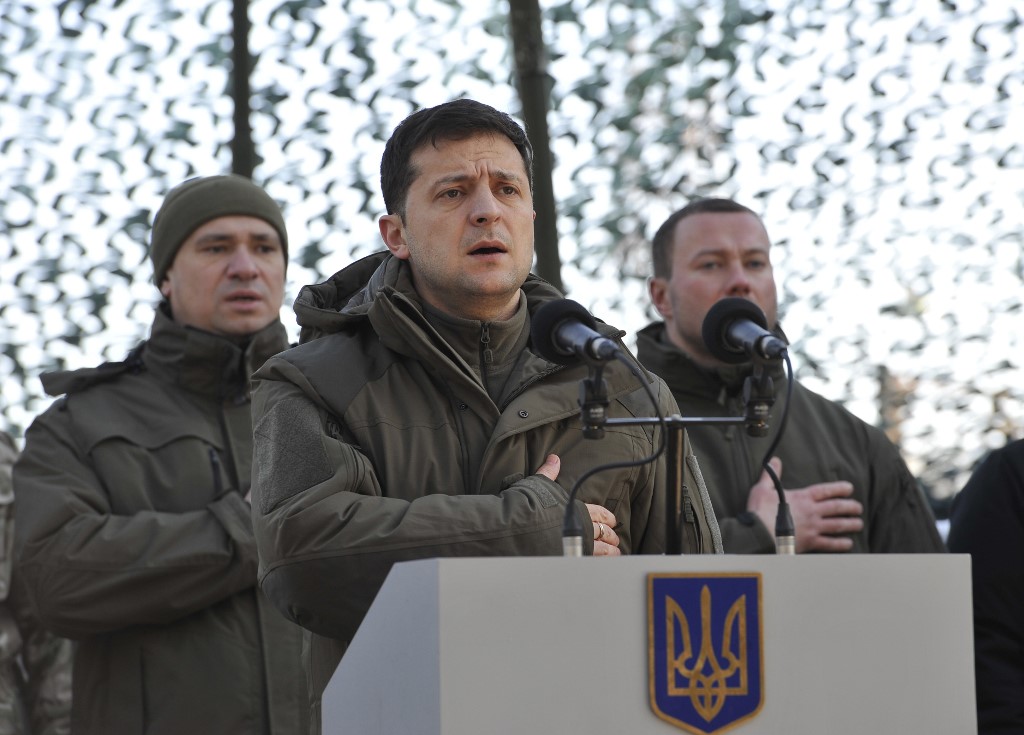 CHASIV YAR, Ukraine – Ukrainian President Volodymyr Zelensky visited frontline troops on Friday, December 6, as he geared up for his first face-to-face talks with Russia’s Vladimir Putin on the five-year conflict in eastern Ukraine.

Zelensky and Putin will meet in Paris on Monday for the summit, with the French and German leaders mediating, in a bid to revive efforts to end Europe’s only active war.

Ahead of the talks, he headed to the snow-covered town of Chasiv Yar, close to the frontline, to pin medals on servicemen.

“Believe me, it’s a lot easier to hold talks feeling your strength and your support behind me,” he told the troops.

While no breakthrough is expected, the holding of the summit is seen as a hopeful sign after high-level talks have stalled for the last 3 years.

Since it broke out in 2014, the conflict between Kiev and Russia-backed separatists in eastern Ukraine has killed more than 13,000 people, forced more than a million from their homes and battered the country’s economy.

It has also deeply strained ties between Russia and the West, with the United States and European Union imposing sweeping sanctions on Moscow over its annexation of Crimea and support for the separatists.

Monday’s talks will be the first in three years in the so-called Normandy format, which aims to put in place accords agreed in Minsk by Russia, Ukraine, France and Germany in February 2015.

The Minsk accords called for a ceasefire, the withdrawal of heavy weapons, the restoration of Kiev’s control over its borders, wider autonomy for separatist-controlled territory and the holding of local elections.

But the deal was never implemented and talks stalled under Zelensky’s predecessor Petro Poroshenko.

“We want the new Ukrainian government and the upcoming Paris summit to take decisive steps to put the Minsk accords in motion,” Russian Foreign Minister Sergei Lavrov said in Rome.

“The signals are however contradictory,” he said.

In an opinion piece published on Friday, Poroshenko warned his successor about the Russian president.

“Don’t trust Putin. Ever and in anything. Putin manipulates everything: content, facts, figures, maps, emotions. He hates Ukraine and Ukrainians,” Poroshenko wrote in the Ukrainska Pravda online daily.

“I sincerely advise to avoid meeting one-on-one with Putin, and if this is impossible, resist his KGB manipulations and flattery.”

Since coming to power in May after a shock election win, Zelensky has overseen a series of steps to reduce tensions, including a historic exchange of 70 prisoners with Russia, the withdrawal of some frontline forces and the return of Ukrainian ships seized by Moscow last year.

Zelensky said this week the fact that the talks were taking place at all was a “first victory” in his efforts to end the war.

The Kremlin has sent signals that it is ready to work with Zelensky, who Putin has described as “likeable” and “sincere”.

Zelensky has said he will be pushing on 3 points at the talks: another exchange of prisoners, the implementation of a ceasefire and the disbanding of all “illegal” armed groups on Ukrainian territory.

Putin has been less forthcoming about his intentions, but Moscow will likely seek guarantees on the status of the separatist-held territories of Donetsk and Lugansk and the conduct of elections.

The Russian leader will also be looking to hear from France and Germany about the possibility of easing sanctions that have hit his country’s economy.

Zelensky will have to tread carefully. Led by nationalists and war veterans, a series of protests have broken out in Kiev in recent weeks warning against any “capitulation” to Russia.

‘Change in the mood music’

And he may have lost a key ally in the United States, as longstanding bipartisan American support for Kiev is called into question by Donald Trump’s impeachment scandal.

French President Emmanuel Macron, who will mediate along with German Chancellor Angela Merkel, pushed hard for the talks and they will be a test of his efforts to reset Europe’s ties with Moscow.

Mark Galeotti, an associate fellow with RUSI in London, said it was unlikely there would be concrete progress at the talks but that they were nonetheless crucial.

“It’s important because it represents potential for a change in the mood music, it’s a first step,” Galeotti said.

“The Russians are actually making quite a lot of noises suggesting they are much more willing to negotiate than in the past… There has been a meaningful shift.” – Rappler.com