Trump thanks Iran as American freed in prisoner swap

Dec 8, 2019 11:04 AM PHT
Agence France-Presse
Facebook Twitter Copy URL
Copied
Princeton graduate Xiyue Wang, who was jailed in Iran for espionage since 2016, reunites with his family 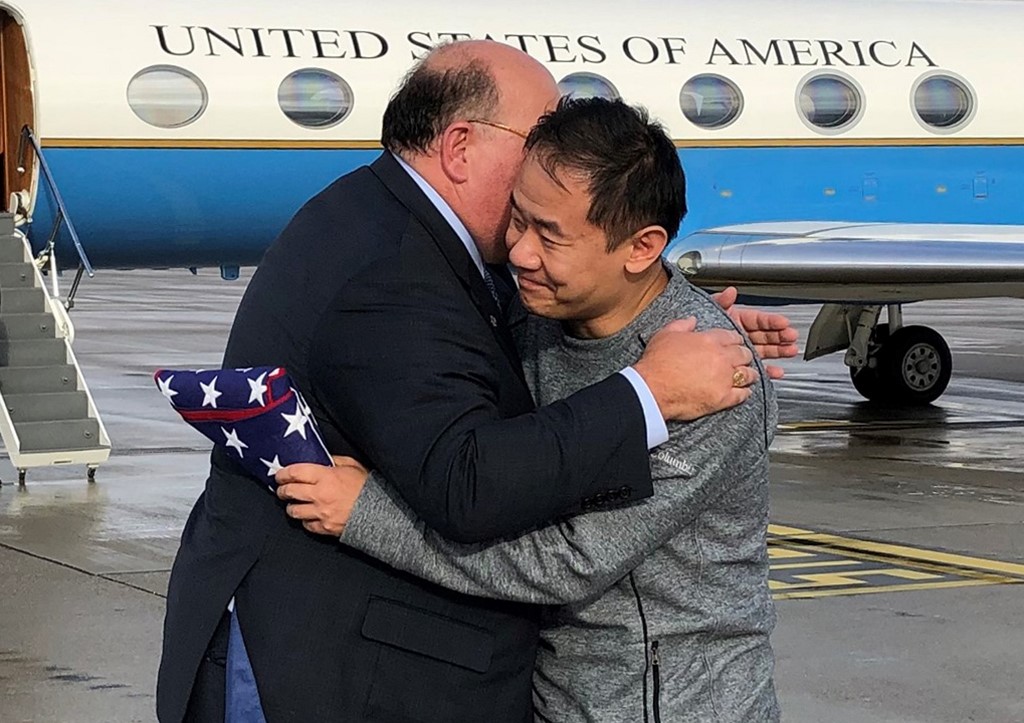 WASHINGTON, United States – President Donald Trump had rare positive words for Iran on Saturday, December 7, thanking the United States foe for a “very fair” negotiation to successfully pull off a prisoner swap that saw an American released from Iranian detention amid soaring tensions.

The exchange, which took place in neutral Switzerland, involved a Princeton graduate student jailed in Iran for espionage since 2016 and an Iranian national arrested over a year ago in Chicago.

“Thank you to Iran on a very fair negotiation,” tweeted Trump, as Xiyue Wang made his way home to his family. The US leader was expected to welcome Wang in person when he arrives in the US, after a stop in Germany for medical evaluations.

Taken during the Obama Administration (despite $150 Billion gift), returned during the Trump Administration. Thank you to Iran on a very fair negotiation. See, we can make a deal together! https://t.co/rZaY9p8xzV

“It was a one-on-one hostage swap,” Trump told reporters. “I think it was great to show than we can do something. It might have been a precursor as to what can be done.”

A photo tweeted by the American Embassy in Bern showed Wang on a rainswept tarmac in Zurich with an official blue and white US jet in the background, hugging Ambassador Edward McMullen.

The Chinese-born American was in apparent good health and in “very, very good humor,” said a senior US administration official.

Tehran had announced the release of its national, Massoud Soleimani, shortly before Trump revealed that Wang was returning home.

“Glad that Professor Massoud Soleimani and Mr Xiyue Wang will be joining their families shortly,” Iran’s Foreign Minister Mohammad Javad Zarif tweeted – along with a photograph of himself and the scientist on a plane under the words “Going home.”

“Many thanks to all engaged, particularly the Swiss government,” which has looked after US interests in Iran in the absence of diplomatic ties, Zarif said.

The Swiss foreign ministry confirmed that the exchange – which it called a “humanitarian gesture” – took place on its territory. Both the US and Iran credited Switzerland with an intensive diplomatic effort to secure the men’s release.

The US and Iran have not had diplomatic ties since 1980, and relations have sharply worsened since Trump withdrew from an international accord giving Iran sanctions relief in return for curbs on its nuclear program.

The arch-enemies came to the brink of military confrontation in June this year when Iran downed a US drone and Trump ordered retaliatory strikes before cancelling them at the last minute. (READ: U.S. and Iran in tit-for-tat sanctions over missiles)

Secretary of State Mike Pompeo said the US was “pleased that Tehran has been constructive in this matter.”

Briefing reporters on condition of anonymity, the senior US official noted that Trump “remains committed to talks with Iran without preconditions” – about Tehran’s nuclear program, its “malign activities” in the Middle East, and the deadly mass protests that have gripped the country.

While Iran has so far rebuffed US offers of talks, the official said: “We’re hopeful that the release of Mr Wang is a sign that the Iranians may be willing to come to the table to discuss all these issues.”

The official also voiced hope that Wang’s release signals “the Iranians are realizing that the practice of hostage-taking diplomacy really should come to an end.”

A doctoral candidate at Princeton, Wang was conducting research for his dissertation on late 19th- and early 20th-century Eurasian history when he was imprisoned in August 2016. He was serving 10 years on espionage charges.

“He was not a spy, he was not involved in espionage and, and was wrongfully detained from the start,” the US official said.

A statement on the Iranian judiciary’s Mizan Online website said Wang had been “freed on Islamic clemency.”

Soleimani, a professor and senior stem cell researcher at Tehran’s Tarbiat Modares University, was arrested on arrival at an airport in Chicago in October 2018 for allegedly attempting to ship growth hormones, according to Iranian media.

The US official confirmed the Justice Department has dropped charges against Soleimani, calling the swap a “reciprocal humanitarian gesture” and a “very, very good deal for the United States.”

“There’s been absolutely no payments of cash or lifting of sanctions or any sort of concessions or ransom,” the official said.

Rob Malley, president of the International Crisis Group consultancy, called it a “rare bit of good news on US-Iran front.”

“But several other Americans remain unjustly detained in Iran and they should be released too,” he cautioned. “They should not be used as pawns in the two countries’ fraught relationship.”

Two other Australians, travel bloggers Jolie King and Mark Firkin, were released in October by Iran, in another apparent swap for Iranian student Reza Dehbashi.

In September, Negar Ghodskani, an Iranian woman sentenced in the US for violating sanctions against Tehran was released and returned home after giving birth in custody.

An unknown number of Iranians are detained abroad. – Rappler.com