Dec 8, 2019 2:45 PM PHT
Agence France-Presse
Facebook Twitter Copy URL
Copied
The shooter did not have any apparent ties to terror groups and no group has officially claimed the attack, the New York Times reports 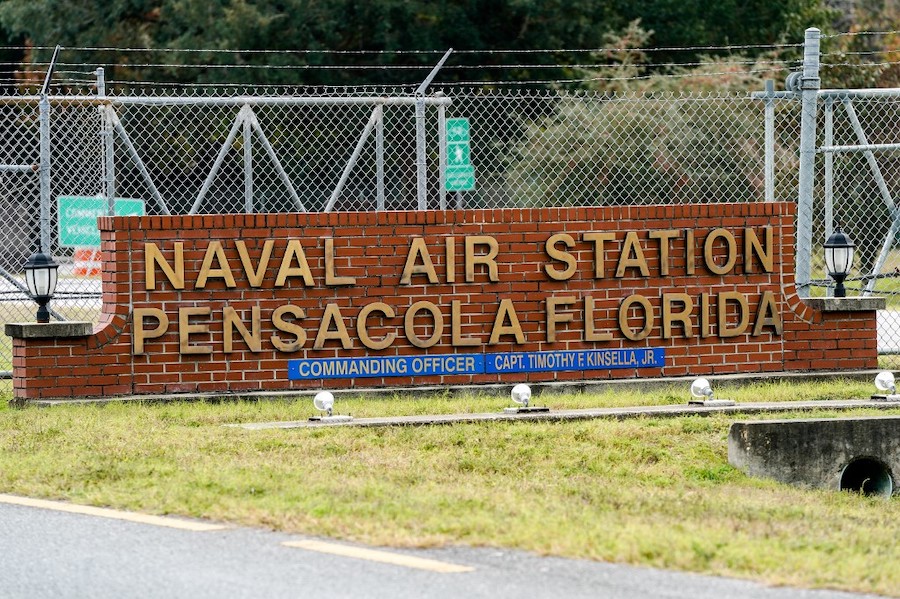 MIAMI, USA – The Saudi military student who carried out a deadly shooting spree at a US naval base showed videos of mass shootings at a dinner party the night before the attack, US media reported on Saturday, December 7.

The shooting on Friday in a classroom building at Naval Air Station Pensacola in Florida killed 3 sailors and wounded 8 other people, including two responding sheriff’s deputies, before police shot dead the assailant.

The dinner party revelation came as authorities probed whether the shooter had any accomplices.

“We’re finding out what took place, whether it’s one person or a number of people,” President Donald Trump told reporters. “We’ll get to the bottom of it very quickly.”

The FBI on Saturday formally identified the attacker as Mohammed Alshamrani, 21, a second lieutenant in the Royal Saudi Air Force and a student naval flight officer.

The SITE Intelligence Group, which monitors jihadist media, said he had posted a short manifesto on Twitter prior to the attack that read: “I’m against evil, and America as a whole has turned into a nation of evil.”

“I hate you because every day you (are) supporting, funding and committing crimes not only against Muslims but also humanity.”

The Twitter account that posted the manifesto – which also condemned US support for Israel and included a quote from Al-Qaeda’s deceased leader Osama bin Laden – has been suspended.

The shooter did not have any apparent ties to terror groups and no group has officially claimed the attack, the Times reported, citing an unnamed senior American official.

However, “given that ISIS has very little to lose at this point, it wouldn’t be surprising if it claimed the attack, regardless of the attacker’s potential allegiances,” tweeted SITE Director Rita Katz, referring to the Islamic State group.

Naval Air Station Pensacola hosts the US Navy’s foreign military training programs, established in 1985 specifically for Saudi students before being expanded to other nationalities.

The shooter was one of “a couple hundred” foreign students at the base, according to commanding officer Timothy Kinsella.

Trump indicated the training program would now be under review.

“We’ve been doing this with other countries, foreign countries. I guess we’re going to have to look into the whole procedure, we’ll start that immediately,” he said.

Six Saudi nationals also assigned to the base were questioned after the attack, US media reported.

Three were at the base and apparently filmed the shooting, The Washington Post said. The other 3 had flown into the US with the attacker and were based at training sites in Louisiana and Oklahoma, the Post said, citing an unnamed official.

‘Hole in our hearts’

Saudi Arabia’s King Salman has denounced the shooting as a “heinous crime” and said the gunman “does not represent the Saudi people.”

The shooting marks a setback in the kingdom’s efforts to cast off its longstanding reputation for promoting religious extremism after the September 11, 2001 attacks, in which 15 of the 19 hijackers were Saudis.

Prince Khalid bin Salman, the king’s younger son and the deputy defense minister, offered his “sincerest condolences” to the families of the victims.

“Like many other Saudi military personnel, I was trained in a US military base, and we used that valuable training to fight side by side with our American allies against terrorism and other threats,” Prince Khalid said on Twitter.

Trump said King Salman and Crown Prince Mohammed bin Salman, the country’s de facto ruler, would “help out the families very greatly,” though he did not specify how.

Late on Saturday, the Navy identified the sailors killed in the attack as Joshua Watson, Mohammed Haitham and Cameron Walters.

Watson’s younger brother said the 23-year old, who reported to the base for flight training two weeks ago, “saved countless lives today with his own.”

“After being shot multiple times he made it outside and told the first response team where the shooter was and those details were invaluable,” Adam Watson said in a Facebook post.

“He died a hero and we are beyond proud but there is a hole in our hearts that can never be filled.” – Rappler.com