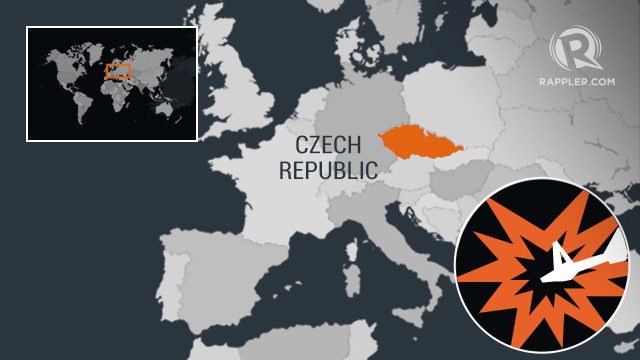 Facebook Twitter Copy URL
Copied
(UPDATED) Four men and two women died during the assault, which lasted only a few seconds according to police

PRAGUE, Czech Republic (UPDATED) – A gunman killed himself Tuesday, December 10, after shooting dead 6 patients at a hospital in the eastern Czech city of Ostrava, in what the premier has called “an immense tragedy.”

The attacker gunned down people at close range at the trauma ward of the Faculty Hospital in Ostrava, a steel hub located some 300 kilometers (190 miles) east of Prague.

Four men and two women died during the assault, which lasted only a few seconds according to police. Two other people were seriously wounded while a third person sustained light injuries.

Police said they had not yet determined what drove the 42-year-old to launch the attack.

“I was told the dead victims were people sitting in the waiting room of the trauma ward, fortunately there were not as many as usual,” Prime Minister Andrej Babis told local media.

“The gunman was allegedly shooting from a close range, aiming at the head and neck.”

The shooter then fled the scene in a silver Renault Laguna car, sparking a dramatic police hunt with hundreds of officers and two helicopters chasing him.

The man turned the gun on himself inside the vehicle as police were about to capture him in a village just northwest of Ostrava, regional police chief Tomas Kuzel said.

“We identified the gunman using hospital cameras. We deployed two helicopters, identified his car…and when one helicopter descended over the car, he shot himself in the head,” Kuzel told reporters.

Police said the gunman had used a “short firearm” in the attack, which took place shortly after 0600 GMT.

“As far as we know, the man is not in our database of legal gun owners,” Kuzel said, adding there was no indication that he had an accomplice.

The public Czech Radio identified the killer as a builder from the nearby Opava district.

His boss, named as Ales Zygula, told the radio station that the attacker had “decided he was seriously ill and that no one wanted to treat him.”

Prior to his death, police had urged “maximum possible caution” as they tweeted pictures of the man who had thick black hair and was wearing a red and black jacket and trainers.

Babis described the shooting as “a catastrophe.”

“It’s something we’re not used to in our country,” the populist billionaire added.

“I absolutely don’t understand the motive of this young man.”

The prime minister has cancelled a two-day trip to Estonia scheduled to start Tuesday afternoon.

“I’m with you in my heart, I’m thinking of you in these tragic hours,” he said in a tweet posted by his spokesman.

Gun rampages are rare in this EU member country of 10.7 million people.

In 2015, a restaurant guest in the southeastern town of Uhersky Brod shot dead 7 men and a woman before committing suicide.

In March this year, a patient at a Prague hospital shot two fellow patients after an argument in a room. One of the men died. – Rappler.com