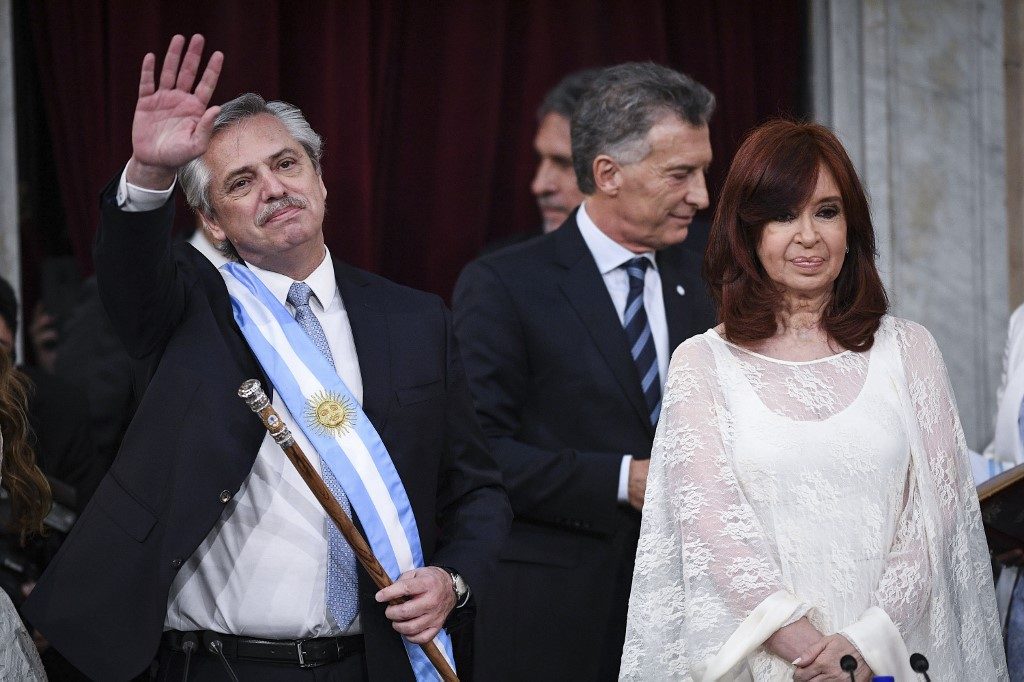 BUENOS AIRES, Argentina – Center-leftist Alberto Fernandez was sworn in as Argentina president on Tuesday, December 10, taking over from the market-friendly Mauricio Macri amid applause and singing by lawmakers and supporters in Buenos Aires.

Fernandez, whose vice president is controversial former leader Cristina Kirchner, will govern until 2023 in a country beset by recession, high inflation, rising unemployment and poverty.

In his inauguration speech, the Peronist leader promised a “new, fraternal and caring social contract.”

Since winning October’s election, the 60-year-old Fernandez has pledged to put Argentina “back on its feet” following 18 months of economic woes triggered by a currency crisis.

Speaking in a televised address, Fernandez said Argentina needed to “overcome the rancor and hate” that has become a feature of its increasingly polarized political landscape.

He twice hugged Macri tightly during the ceremony.

The new head of state will host an inauguration lunch for fellow presidents from across Latin America – including Cuba’s Migue Diaz-Canel who arrived on Sunday, December 8 – before addressing a crowd at the Plaza de Mayo in the evening.

Chile’s President Sebastian Pinera was due to attend in what would have been his first foreign trip since the beginning of his country’s social crisis, but he canceled the visit after a Chilean Air Force plane with 38 people onboard went missing between the southern tip of South America and Antarctica.

Paraguay’s Mario Abdo Benitez and Uruguay’s Tabare Vazquez were also due to attend.

A notable absentee was President Jair Bolsonaro of Brazil. Argentina’s ideological swing has roiled relations between the two countries and the far-right Bolsonaro at first declined to send a cabinet minister to represent him.

Bolsonaro said ahead of Fernandez’s election victory that his government would turn Argentina into the new Venezuela, with Brazil likely to face a flood of Argentine refugees.

Fernandez’s was among the loudest voices to call for the release of leftist icon and Bolsonaro adversary Luiz Inacio Lula da Silva from jail.

Moderate and pragmatic, Fernandez has never served in elected office but brings years of experience of backroom strategizing, as a former top aide to late President Nestor Kirchner from 2003-2007, and briefly, for his wife Cristina when she succeeded him.

After joining forces with Cristina Kirchner to unite a fragmented camp and win October’s elections, his main challenge will be to lead the resulting coalition government, according to analyst Enrique Zuleta.

“His biggest challenge will be to administer this heterogeneous coalition.”

Fernandez will rely heavily on his pick as economy minister. Martin Guzman, 37, will have the task of negotiating with the International Monetary Fund and other international creditors on restructuring Argentina’s massive debt.

Guzman, an academic at Columbia University in the United States, has been critical of austerity policies as a solution to debt crises and his appointment signals a sharp shift from Macri’s austerity drive.

Argentina’s total external debt amounts to more than $315 billion, about 100% of GDP.

“We are already working with the IMF. It’s work that must be done quietly, so Argentines can rest assured that we have been dealing with the issue for weeks,” Fernandez said at the weekend.

“We have opened a negotiation process, we are satisfied with how it’s going.”

Economist Hector Rubini of the University of Salvador said the government is likely to maintain the strict exchange controls put in place by the Macri government in October, at least initially.

He said a new budget law will likely be approved to reallocate funds to fight poverty, an issue that Fernandez said was “a moral imperative.”

Fernandez has also pledged to move to legalize abortion, a bitterly divisive issue in Roman Catholic Argentina, saying last month he would send a bill to Congress as soon as possible.

The leader inherits a dismal economy that will shrink 3.1% this year, with inflation running at 55%, poverty near 40%, and unemployment at over 10%.

Despite a bleak economic outlook, Fernandez is likely to be able to count on a period of social peace from the powerful unions, and will have Congress and debt timetables on his side.

“He has time, he has Congress, he has ideas. If he plays his cards right he can create a great presidency,” Zuleta said. – Rappler.com