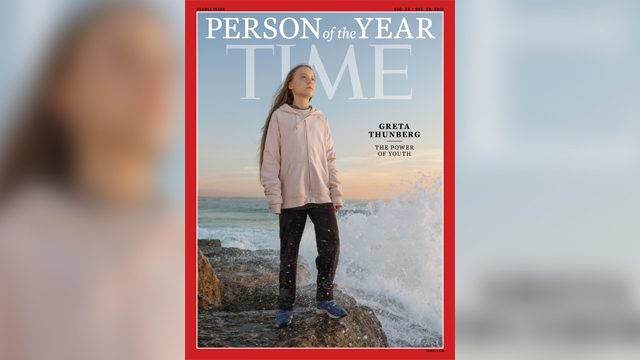 MANILA, Philippines – Climate activist Greta Thunberg, 16, was named Time magazine’s “Person of the Year” on Wednesday, December 11 – the youngest individual ever to be named as such.

He added, “Thunberg has become the biggest voice on the biggest issue facing the planet – and the avatar of a broader generational shift in our culture that is playing out everywhere from the campuses of Hong Kong to the halls of Congress in Washington.”

The Swedish teen has become the global face of the growing youth movement against climate inaction.

Her global climate movement “Fridays for Future” began in August 2018 when she started sitting alone outside Sweden’s parliament with her now iconic sign reading, “School strike for the climate.”

“For sounding the alarm about humanity’s predatory relationship with the only home we have, for bringing to a fragmented world a voice that transcends backgrounds and borders, for showing us all what it might look like when a new generation leads, Greta Thunberg is TIME’s 2019 Person of the Year,” Felsenthal said.

Aside from the TIME recognition, Thunberg also won the Right Livelihood Award, sometimes called the “alternative Nobel Prize,” and Amnesty International’s “Ambassadors of Conscience” award in September. – with reports from Agence France-Presse/Rappler.com