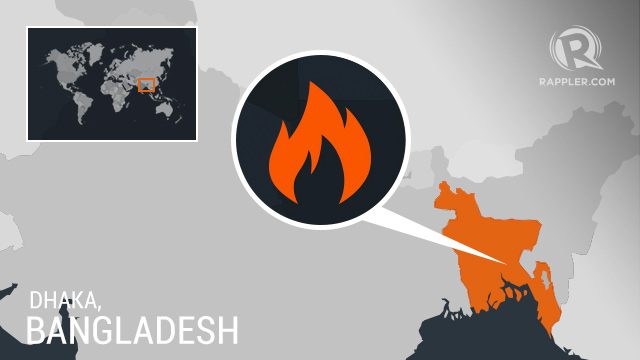 DHAKA, Bangladesh – At least 13 people were killed and nearly 20 people were critically injured when a fire swept through an illegal plastics factory outside the Bangladeshi capital Dhaka, police said Thursday, December 12.

Factory fires are common in Bangladesh, especially in the dry winter season, due to lax enforcement of safety codes.

The blaze started on Wednesday afternoon, December 11, and quickly ripped through the ground floor of the Prime Patent Plastic factory in Keraniganj, just southwest of Dhaka, police said.

“So far 13 people were killed. Twelve of them died while being treated at the Dhaka Medical College Hospital and and another died at the scene,” police inspector Bacchu Mia told the Agence France-Presse (AFP).

Police said some 150 people were working in the tin-shed ground floor factory when a fire broke out with a loud bang in one of the rooms.

“The workers who were in that room were the ones who were burnt. We immediately shifted them to hospital in critical conditions,” local police chief Shah Zaman told AFP.

The factory was operating illegally, he said, adding scores of firefighters battled for three hours to bring the fire under control.

Police are hunting for the factory owners and would press charges of murder due to negligence against them, he said.

One of the injured workers Zakir Hossain, 22, told local newspaper The Daily Star that the fire broke out close to where eight cylinders of inflammable gas were stored.

Doctor Samanta Lal Sen said the injured workers were in a critical condition, with many suffering from smoke inhalation and burns to much of their bodies. He said the death toll was expected to rise.

In February this year, a fire in a historic Mughal building in an old part of Dhaka killed at least 70 people and injured dozens.

In November 2012, at least 111 people were killed in a blaze at a garment factory making apparel for Western retailers, in one of the country’s most devastating fires. – Rappler.com