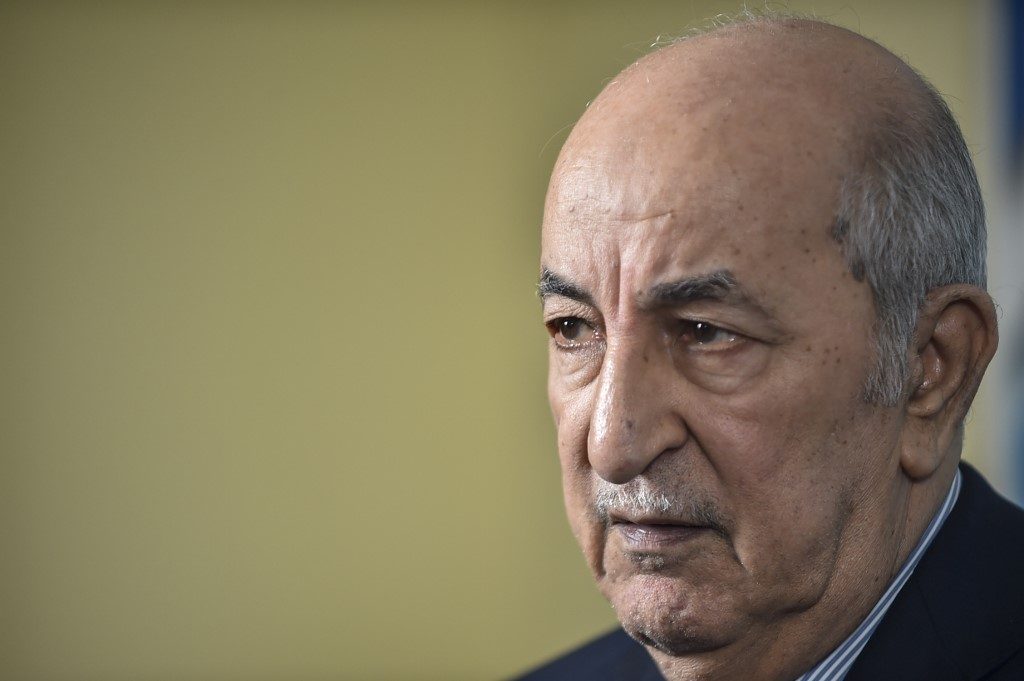 Facebook Twitter Copy URL
Copied
(UPDATED) Abdelmadjid Tebboune, 74, takes 58.15% of the vote, trouncing his 4 fellow contenders without the need for a second-round runoff

ALGIERS, Algeria (UPDATED) – A former ally of Algeria’s deposed leader Abdelaziz Bouteflika was elected president of the protest-wracked country in a widely boycotted vote, sparking another outpouring of anger on the streets Friday, December 13,.

Huge crowds massed once again in Algiers vowing to keep up their campaign for the total dismantling of the political establishment following ex-prime minister Abdelmadjid Tebboune’s victory in the December 12 poll.

“The vote is rigged. Your elections are of no concern to us and your president will not govern us,” demonstrators chanted following polls marred by unrest and a low turnout.

“Tebboune is worse than Bouteflika. He’s known for being one of the thieves,” said Meriem, a 31-year-old civil servant. “We did not vote and we will not back down.”

The 74-year-old former premier took 58.15% of the vote, trouncing his 4 fellow contenders without the need for a second-round runoff, electoral commission chairman Mohamed Charfi announced.

All 5 candidates served under the two-decade rule of Bouteflika, 82, who resigned in the face of mass demonstrations in April.

The deeply unpopular election had been championed by the army as a way of restoring stability after almost 10 months of street protests.

But on polling day protesters defied a heavy police presence to hold a mass rally in the heart of the capital and smaller demonstrations in provincial cities.

The candidates – who included another former prime minister, Ali Benflis, 75, and an ex-minister, Azzedine Mihoubi – were widely rejected by protesters as “children of the regime.”

A record 6 in 10 Algerians abstained in the vote, Charfi said, the lowest turnout for a multi-party election since independence from France in 1962.

Tens of thousands rallied on election day in central Algiers, where police with water cannon and helicopters tried to disperse protesters.

On Friday, protesters took to the streets again in response to calls on social media under the slogan “Tebboune is not my president.”

Said, a 32 year-old engineer from Bouira, said he had made the 100-kilometer journey to the capital to take part in the demonstrations.

“I spent the night here so I could demonstrate again…and say we don’t recognize their election or their president.”

Pensioner Farida mocked the official figures from the electoral commission. “Someone added yeast to them to get them to rise,” she said.

In the mountain region of Kabylie, home to much of the country’s Berber minority and historically opposed to the central government, protesters ransacked polling stations and clashed with police on election day, residents said.

In Algiers, a group of protesters stormed a polling station, suspending voting there for about half an hour before police pushed them out again.

Young protesters in the capital slammed those casting their ballots as “traitors of the nation.”

That earned a sharp rebuke from one man in his 80s who said: “I fought for the right to vote, so I’m voting for my country.”

Other voters said they had turned out because after nearly a year of turmoil it was time for a return to stability.

Tebboune faces a mammoth task to be accepted by the electorate in the North African country, where many citizens see the government as inept, corrupt and unable to manage the flagging economy.

He served in Bouteflika’s government from 1999 to 2002 as communications and then housing minister. He returned as housing minister from 2012 to 2017 when he was briefly appointed prime minister.

But he was sacked by Bouteflika after just 3 months for criticizing some of the president’s inner circle, many of whom are now in jail on corruption charges.

Since the start of the campaign, Tebboune has sought to distance himself from his years of service under Bouteflika.

At his campaign headquarters, the announcement of his victory was greeted with shouts of “The people and the army with Tebboune.”

The “Hirak” street movement kicked off when Bouteflika announced in February that he would seek a fifth term in office.

Protesters have stayed on the streets ever since, demanding the total dismantling of the system that has ruled Algeria since independence.

Demonstrators have vented their anger at army chief Ahmed Gaid Salah, who has emerged as Algeria’s de facto strongman since Bouteflika stepped down.