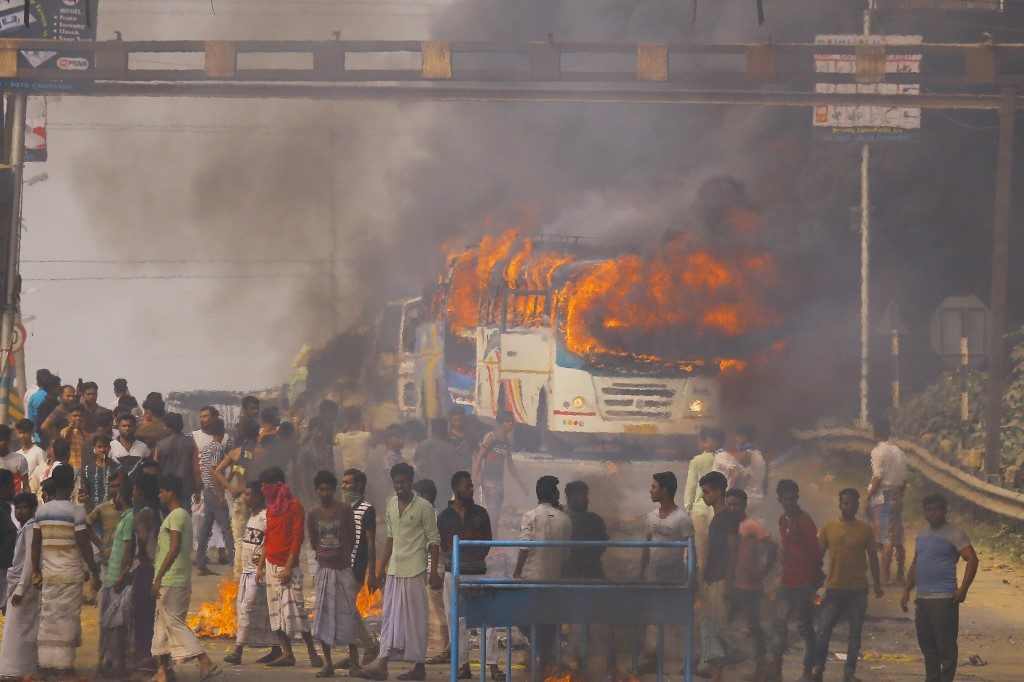 Many in the far-flung, resource-rich region fear the new legislation will grant citizenship to large numbers of immigrants from neighboring Bangladesh, who they accuse of stealing jobs and diluting the region’s cultural identity.

Hundreds of protesters rallied in the capital New Delhi Saturday, urging Prime Minister Narendra Modi’s government to revoke the law that they said would “divide our secular country on religious lines.”

Protests took a violent turn in West Bengal state, where a portion of a railway station complex was set on fire. Burning tires were thrown on rail tracks and key roads blocked by slogan-chanting protesters.

On Friday, December 13, the funeral procession of 18-year-old Sam Stafford, who was killed in the firing, was attended by hundreds of angry and distraught mourners who shouted, “Long live Assam.”

“We were watching news all day on TV about the protests when my nephew left home in the evening. We asked him not to go but he went with his friends,” the student’s aunt Julie Stafford told AFP.

Anticipating further unrest, authorities extended an internet ban across Assam till Monday, December 16. Most shops were shut and anxious residents stocked up supplies Saturday, when the curfew was relaxed during the day.

The Citizenship Amendment Act allows for the fast-tracking of applications from religious minorities, including Hindus and Sikhs from Pakistan, Afghanistan, and Bangladesh, but not Muslims.

Samujjal Bhattacharya from the All Assam Students Union, which has been at the forefront of the protests, told AFP the group would continue its fight against the new law “in the streets and in the court.”

Modi and Japanese counterpart Shinzo Abe postponed a summit that reportedly was due to be held in Guwahati from Sunday, December 15, and the US and Britain warned their nationals to “exercise caution” if travelling to the wider northeast region.

Islamic groups, the opposition, and rights organizations say the law is a part of Modi’s Hindu nationalist agenda to marginalize India’s 200 million Muslims.

He denies this and says that Muslims from the 3 countries are not covered by the legislation because they have no need of India’s protection.

Assam has long been a hotbed of ethnic tensions. In 1983 some 2,000 people, mainly Bengali Muslims, were butchered in what became known as the Nellie massacre.

This year, a citizenship registry left off 1.9 million people – many of them Muslims – unable to prove that they or their forebears were in Assam before 1971, leaving them to face possible statelessness, incarceration, or even deportation under the new law.

Sanjoy Hazarika, a professor at Delhi’s Jamia Millia Islamia University, said the law had renewed concerns that a million or more people in Assam would get “legitimized” because they belonged to a “particular religious community.”

“There has been this agitation [against] illegal migration from Bangladesh over many years. It’s a pretty old issue and the concern in Assam is that people will become a minority in their own land if they haven’t become that already,” he told AFP.

On Friday, university students in Delhi clashed with police, who used batons and tear gas shells to quell the protests.

The passage of the bill also sparked angry scenes in both houses of parliament this week, with one lawmaker likening it to anti-Jewish legislation by the Nazis in 1930s Germany.

Rahul Gandhi of the opposition Congress party has called the law “an attempt to ethnically cleanse the northeast.” – Rappler.com