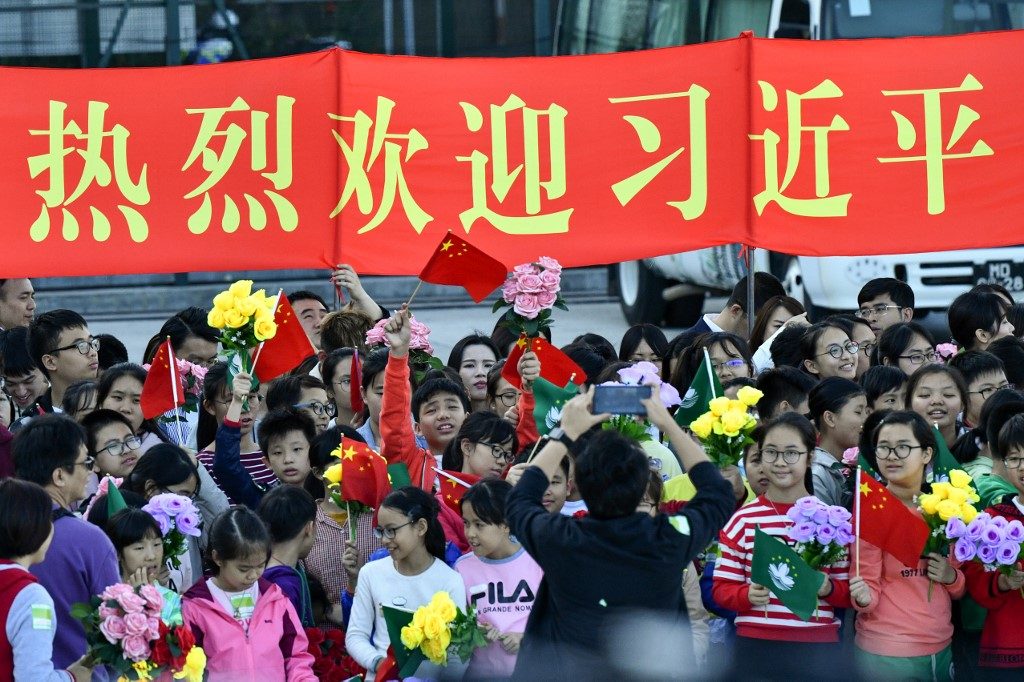 Facebook Twitter Copy URL
Copied
Security is ramped up ahead of Xi Jinping's 3-day visit which culminates on Friday. Limited details have been released by authorities on Xi's schedule.

MACAU, China – Chinese president Xi Jinping landed in Macau on Wednesday, December 18, as the city prepares to mark 20 years since the former Portuguese colony was returned, a celebration that stands in stark contrast to months of unrest in neighboring Hong Kong.

Security has been ramped up ahead of Xi’s three-day visit which culminates on Friday’s anniversary.

China’s authoritarian leadership is keen to showcase Macau as a successful example of its “one country, two systems” model, with party leaders heaping praise on a pliant city of 700,000 that has grown rich on gambling and deference to authoritarian rule.

Since the 1999 handover by Lisbon, Macau has witnessed little of the dissent that has exploded in Hong Kong during six months of often violent pro-democracy protests as large chunks of the population seethes under Beijing’s rule.

Limited details have been released by authorities on Xi’s schedule.

He will meet local leaders and attend a dinner and a cultural performance on Thursday. The following day Xi will preside over the inauguration of the city’s new leader Ho Iat-seng.

A former member of China’s top lawmaking body, Ho won a one-horse race this summer to become chief executive – a position that is chosen by a 400-member committee stacked with Beijing loyalists.

Security has been dramatically tightened ahead of Xi’s visit to a city that long ago passed mainland style anti-sedition laws.

Police set up checkpoints and extra screenings for passenger arrivals while authorities said some major roads would see closures.

The city’s first light rail line announced it would shut down for the duration, just a week after it was first opened to the public while the airport said some flights would be rescheduled.

Security checks were also ramped up in Hong Kong’s ferry terminals and on a huge bridge and tunnel system linking the two cities.

Since last week police from mainland China have been manning a newly created checkpoint on an artificial island that links the bridge and tunnel system between Hong Kong, Macau and Zhuhai, the first time they have done so.

Authorities in Macau routinely deny the few requests that are made to hold rallies and the city’s more authoritarian streak has been on display in the run up to the anniversary.

Multiple journalists with Hong Kong passports working for local and international media have been denied entry to Macau in the run up to the anniversary while a group of pro-democracy lawmakers were denied permission to board a ferry on Wednesday.

Earlier this month the president and chairman of Hong Kong’s American Chamber of Commerce were also denied entry to Macau without explanation.

“It’s totally one country, one system,” a 34-year-old local who regularly travels to Hong Kong told AFP, adding that protesting in Macau was “pointless and dangerous”.

“The reason it looks like it’s working well is because Macau people don’t protest.”

But he said there was local anger about the wealth of the city’s elites, the limited transport infrastructure and severe overcrowding, even though the population have become wealthier.

Macau’s skyline and economy have changed beyond recognition since four centuries of Portuguese rule ended in 1999, with glittering casinos the backbone of the city’s dramatic rise.

As the only place in China where gambling is allowed, Macau’s GDP has soared from $6.4 billion in 1999 to more than $55 billion.

Per capita GDP is the third highest in the world behind Luxembourg and Switzerland, according to the International Monetary Fund, while its casinos now rake in each week the same as Las Vegas makes in a month.

But while Macau has grown rich and been politically stable in the 20 years of Chinese rule, it has many vulnerabilities.

Much of the city’s wealth is concentrated in the hands of a small elite and all its economic chips are in the gambling basket which still accounts for 80% of government revenue. – Rappler.com