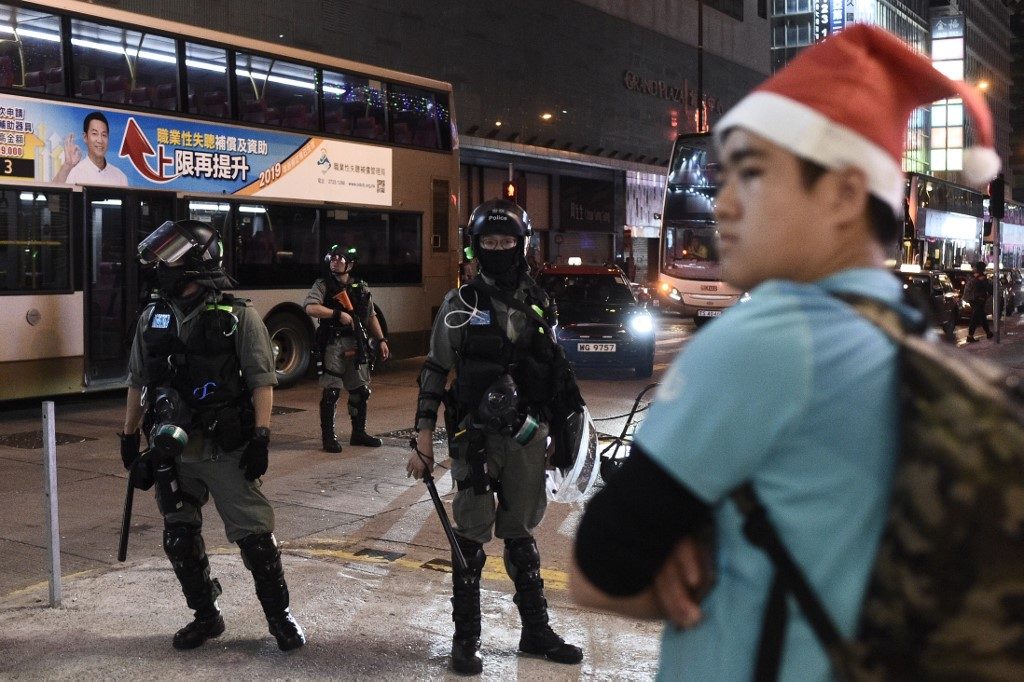 Riot police swooped on dozens of black-clad protesters in one mall in Tai Po district using pepper spray as well as blue dye to mark suspects, said an Agence France-Presse (AFP) reporter on the scene.

Hong Kong has been battered by more than 6 months of protests that has upended the financial hub’s reputation for stability and helped tip the city into recession. (WATCH: 800,000 people mark 6 months of Hong Kong protests)

The city’s many malls have become regular protest venues as demonstrators try to cause economic disruption and pressure the city’s pro-Beijing leadership.

The last month had seen a relative drop-off in violence and protests after pro-democracy candidates won a landslide at local elections.

But with Beijing and city leaders refusing further concessions, rallies and clashes have reignited over the Christmas period.

Christmas Eve saw some of the worst violence in weeks as protesters and police fought running battles for hours in a busy shopping district.

Sporadic and less severe clashes broke out again inside malls on Christmas Day.

The government issued a new statement on Thursday condemning protesters for using violence over the last six months.

Protest groups counter that they have been left with little choice but to return to the streets because Beijing and Lam continue to dig their heels in.

Swathes of the population are seething against Beijing’s rule and the semi-autonomous city’s administration as they push for greater democratic freedoms and police accountability.

Among the demands being made by protesters are an inquiry into the police, amnesty for the more than 6,000 people arrested, and the right to elect Hong Kong’s leader.

China denies clamping down on Hong Kong’s freedoms and has painted the protest movement as a foreign-funded plot to destabilise the motherland, dismissing any of the movement’s political grievances as legitimate. – Rappler.com