MANILA, Philippines – From Europe to Latin America to the Middle East to South Africa and to our own home, Asia, citizens marched on the streets, screamed for change, and took their leaders to task for falling incomes and threatened freedoms.

We’ve never seen such street rage since the Arab Spring a decade ago, when social media – then in its early stages – helped mobilize protests and uprisings against tyrants in the Middle East.

In the last 12 months, the world got reminded of the power of mass movements and onground action – and how democracy can only get stronger because of it.

Here are 2019’s most unforgettable moments from the trenches.

On January 5, France welcomed 2019 with another round of the so-called “yellow vest” protests – a movement initially against high fuel prices that ballooned into a wider revolt against President Emmanuel Macron’s pro-market policies and governing style. Named after the high-visibility jackets worn by the protesters, the “yellow vest” movement posed a great challenge to Macron, who has since offered billions of euros in state aid and tax breaks – and scrapped a planned fuel tax hike. Twelve months after, on December 5, unions started their strike against Macron’s radical pension reform that seeks to unify 42 existing pension plans into a single points-based pension scheme. The government has since offered concessions to unions but failed to appease them. The ongoing strike has crippled public transport in Paris and other cities and affected businesses still reeling from the impact of the “yellow vest” movement. 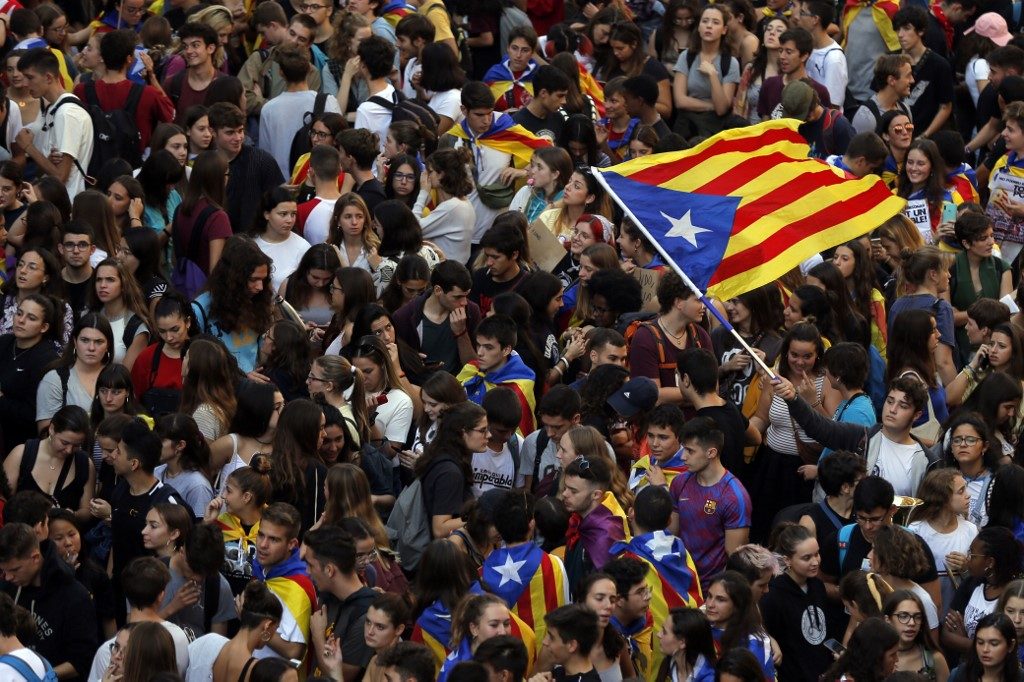 In October, the jailing of 9 Catalan separatist leaders for a failed 2017 independence bid sparked days of mass protests in Barcelona and other Catalan cities. On October 26, over 350,000 demonstrators held a peaceful march in central Barcelona in protest of the decision of Spain’s Supreme Court sentenced the separatist leaders to heavy jail terms. A separate demonstration turned violent later that day.

The unrest in Catalonia was one of the key issues that affected Spain’s general election in November. Inspired by Greta Thunberg’s solo protest outside the Swedish parliament in 2018, millions around the world joined the weeklong Global Climate Strike from September 20 to 27, to demand climate action. According to organizer 350.org, around 7.6 million people took to the streets that week, to join more than 6,100 events in 185 countries.

“Change is coming whether they like it or not,” Thunberg said of skeptics on September 20. The 16-year-old would go on to become Time magazine’s “Person of the Year” – the youngest individual to receive the honor. Despite the Global Climate Strike as well as the deadly storms and wildfires that marked 2019, results of the United Nations’ climate summit in Madrid were “disappointing” for the UN chief himself.

“I am disappointed with the results of COP25,” Antonio Guterres said. “The international community lost an important opportunity to show increased ambition on mitigation, adaptation and finance to tackle the climate crisis.”

The UN summit was seen as crucial since, according to the historic Paris Agreement, 2020 is the year countries will come together again to update their emissions-cutting pledges. The festering crisis in Venezuela took a turn for the worse in January, sparking street protests and mass actions in the country. For the rest of 2019, Venezuela and other Latin American countries convulsed with seething anti-establishment rage.

He is recognized by more than 50 countries, including the United States. But the army backs President Nicolas Maduro and, to this day, he remains in his post. For a long time he didn’t distinguish himself as an outspoken critic of Maduro, but when he proclaimed himself president in January, Guaido suddenly emerged as the socialist leader’s main opponent.

A key challenge now is to continue to inspire a wilting opposition.

When he burst into the scene in January, the 36-year-old lawmaker initially energized a weakened opposition whose key leaders were imprisoned, exiled, or in hiding.

A few days after taking the helm as speaker of parliament on January 23, the only state institution controlled by the opposition, Guaido proclaimed himself acting president, declaring Maduro’s reelection illegitimate.

His popularity rating among Venezuelans soared to 63%. By October, however, it had dropped more than 20 points. Meanwhile, major demonstrations erupted in Haiti in mid-September, amid fuel shortages and demands for the resignation of President Jovenel Moise. Violence claimed more than 40 lives. A metro ticket hike in Chile’s capital mid-October triggered protests which claimed more than 20 lives before a referendum on reforms was agreed upon. Bolivia was gripped by 3 weeks of demonstrations after President Evo Morales claimed to win a fourth term on October 20. Dozens were killed. Morales resigned on November 10 and fled to exile as the government worked on new elections. Ecuador was paralyzed by nearly two weeks of protests in October. In Colombia, strikes and demonstrations against the right-wing government began mid-November. While President Daniel Ortega and the Nicaraguan opposition and agreed to resume peace talks in March, by April at least 67 people were arrested for defying a protest ban. They were on the streets of Managua to mark the first anniversary of a deadly uprising. Opponents of then Argentinian president Mauricio Macri organized a 24-hour strike in May to protest the government’s inability to reduce inflation that reached 55% over the past year.

The strike in Argentina paralyzed public transport, while all flights to and from the country’s airports were canceled. Banks, schools, and universities were closed.

In December, center-leftist Alberto Fernandez was sworn in as the new president. The major protest action in Egypt for 2019 took place in September, when thousands of people in a number of cities called on President Abdel Fattah al-Sisi to step down.

In April, Parliament approved changes to the Constitution that extended Sisi’s rule from 4 years to 6, and allowed him to run for reelection in 2024. This means Sisi could possibly remain as president till 2030. A series of anti-government protests in Iraq began in October and are ongoing, despite street closures, internet blockages, and violence.

The protests are an attempt to “weed out the political class” and lessen sectarian divisions in the country. Protesters also want to end the political system in place since the ouster of Saddam Hussein.

There have been at least 400 deaths from the protests, according to estimates. The resignation of Iraqi Prime Minister Adel Abdel Mahdi in November did not dampen the protests. What began as outrage against an oil price increase turned into protests against the Iranian government and its Supreme Leader, Ayatollah Ali Khamenei. The protests began on November 15, hours after it was announced that the price of gasoline would be raised by 50% for the first 60 liters and by 300% for anything above that, each month.

By November 16, the internet had been blocked. The government said it would unblock connectivity once it could be sure the internet will not be abused to cause violent demonstrations. Connections started coming back online around November 21.

At least 208 people reportedly died in the protests, according to Amnesty International, though there are reports that bodies might have been stolen from morgues and injured people arrested to lower the profile or scale of the crackdown.

Following the protests, Khamenei said those killed in the nationwide unrest who had no role in fomenting it should be treated as “martyrs” and their families compensated.

In Lebanon, there were protests seeking to remove the political class, with accusations of systematic corruption across parties. Prior to the main protests, there were demonstrations in September over the state of the deteriorating economy.

What triggered the protests by October 17 were planned taxes on gasoline, tobacco, and usage of WhatsApp calls and other messaging services. (READ: WhatsApp as a tool for fear and intimidation in Lebanon’s protests)

This culminated in the resignation of Prime Minister Saad Hariri’s government, though protests continued as demonstrators sought to get rid of the entire political class – including the President, Michel Aoun, and Speaker of Parliament Nabih Berri – and form a new government with competent specialists. With one of the highest rates of protests in the world, South Africa is sometimes referred to as the “protest capital of the world.”

South Africa’s most prominent protest this year was the service delivery protests held from April to May. It was anchored on the lack of delivery of municipal services – or the basic services which the government taxes citizens for, such as roads, sanitation, water services, and others – a month before its general election in May.

Political parties fired accusations at one another over the cause of the protest actions – the African National Congress (ANC) asserted the Democratic Alliance (DA)  did not effectively deliver services to communities, but the DA said ANC governance in the years before the elections led to the issues.

The ANC won the elections though at a lower vote share than in previous elections. The months-long protests in Hong Kong started in April, when tens of thousands of people marched peacefully against a bill that would allow the extradition of criminal suspects to mainland China.

The protests that followed remained peaceful, even during the huge protest on June 9, where a crowd of at least 150,000 marched against the proposal. Days later, on June 12, the protests turned violent as police fired tear gas and rubber bullets to disperse protesters who tried to storm parliament and block roads.

Hong Kong’s embattled leader Carrie Lam postponed the extradition bill on June 15, but there was no let-up in the demonstrations. On July 1 – the anniversary of Hong Kong’s return to China – hundreds of protesters stormed parliament, ransacking the building and daubing its walls with graffiti.

Aside from the street protests, the pro-democracy movement also brought its advocacy to different parts of the city: malls, train stations, airports, and campuses. After 3 months of unrest, Lam’s government scrapped the extradition bill on September 4, but prominent activist Joshua Wong called the move “too little, too late.” By then, protesters were already demanding that Hong Kongers are allowed to directly elect their leaders, and also an independent inquiry into alleged police brutality.

There seems to be no end in sight for the leaderless movement that has become more violent and disruptive than when it first started. – with reports from Agence France-Presse/Rappler.com

TOP PHOTO: A Lebanese demonstrator kicks back a tear-gas canister during clashes with riot police in the capital Beirut on December 15, 2019. Photo by Anwar Amro/AFP