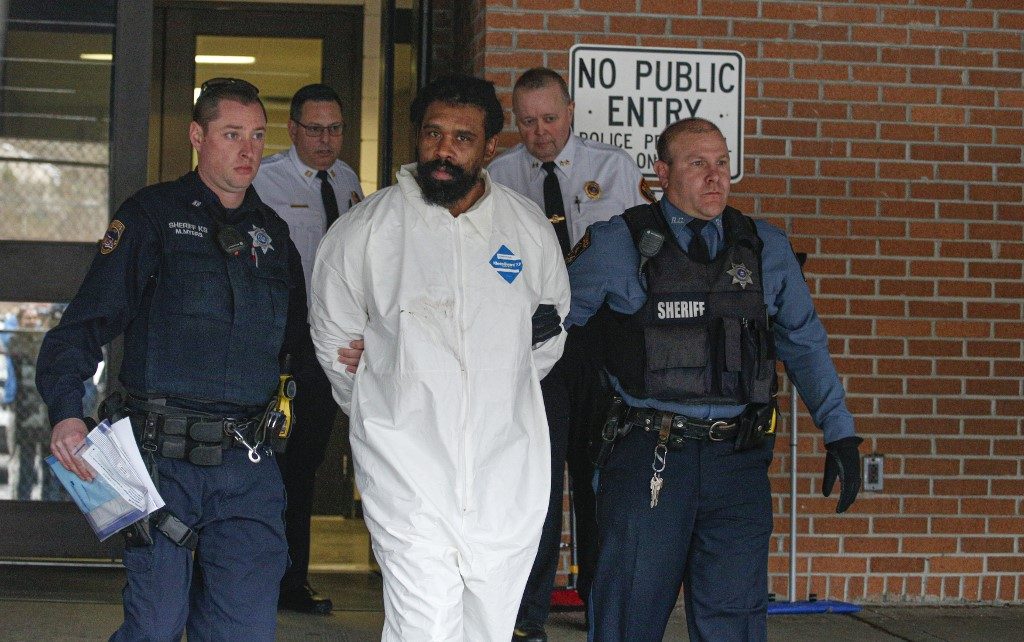 Facebook Twitter Copy URL
Copied
In the latest reported attack against Jewish targets, US media reports that the suspect was covered in blood when officers detained him

MONSEY, United States – A suspect appeared in a New York court on Sunday, December 29, charged with 5 counts of attempted murder after a stabbing spree at a rabbi’s suburban house that left Hanukkah celebrants throwing furniture to defend themselves.

It was the latest in a spate of attacks on Jewish targets.

Grafton Thomas, 37, allegedly entered the property in Monsey, Rockland County, during celebrations on Saturday evening for the Jewish Hanukkah festival, knifing several people with a machete before fleeing.

US media reported that the suspect was covered in blood when officers detained him.

Thomas was ordered held in custody after appearing in Ramapo Town Court, where he denied the charges.

The attack at the home of Rabbi Chaim Rottenberg was quickly condemned as another incident underscoring growing anti-Semitic violence in the United States.

President Donald Trump tweeted that Americans “must all come together to fight, confront, and eradicate the evil scourge of anti-Semitism.”

New York Governor Andrew Cuomo told reporters at the scene on Sunday that “these are people who intend to create mass harm, mass violence – generate fear based on race, color, creed.”

The New York Times quoted Taleea Collins, a friend of the suspect, and his pastor Wendy Paige, as saying the suspect had struggled with mental illness.

No official details were released about the victims. Local media said one person was seriously injured.

Thomas was reportedly arrested in his car about 50 kilometers away, two hours after the attack.

‘He started to come after me’

“Everyone was screaming and panicking and shouting ‘out out out.’ It was chaos,” Joseph Gluck, 30, told reporters.

“I threw a coffee table at the guy. Then he started to come after me.”

In October 2018, a white supremacist shot dead 11 people at a Pittsburgh synagogue – the deadliest attack against the Jewish community in the United States.

Earlier this month 6 people, including the two attackers, were killed in a shooting at a kosher deli in Jersey City, New Jersey, which authorities said was fueled in part by anti-Semitism.

A report in April from the Anti-Defamation League said that the number of anti-Semitic attacks in 2018 was close to the record of 2017, with 1,879 incidents.

As he did Sunday, Trump denounced anti-Semitism after previous attacks but critics blame him for stoking racial hatreds with comments about Muslims and Latin migrants that some white nationalists have taken as confirming their position.

“I was praying for my life,” said Aron Kohn, 65, another witness to Saturday’s attack who compared the assailant’s knife to “the size of a broomstick.”

Kohn threw chairs and tables in an attempt to head off the assault.

“I saw him stabbing people,” he added. “He injured a guy. He was bleeding in his hand, all over.”

“Fearing the next act of terror will not become the new normal for our Jewish neighbors. In New York City, diversity is our strength and we respect the traditions of all who call New York City home,” the mayor said in a statement.

New York Senator Chuck Schumer demanded “a thorough federal investigation by the FBI of this specific attack and other anti-Semitic attacks in recent days.”

Israeli Prime Minister Benjamin Netanyahu strongly condemned the latest incident and other “recent displays of anti-Semitism, while Canadian Prime Minister Justin Trudeau tweeted: “Antisemitism & hate have no place anywhere in our world and we must continue to stand together against them.”

The attack happened at about 10:00 pm on Saturday, December 28, the seventh night of Hanukkah, with about 100 people gathered for a candle-lighting ceremony.

“It’s a wave and a trend of hate-filled violence that is sweeping the country, not just NY State,” tweeted Maya Wiley, a civil rights activist and senior vice president for social justice at the New School private university in New York.

At Thomas’s court appearance, bail was set at $5 million and he was then taken in handcuffs to a police vehicle and driven to Rockland County Jail. – Rappler.com