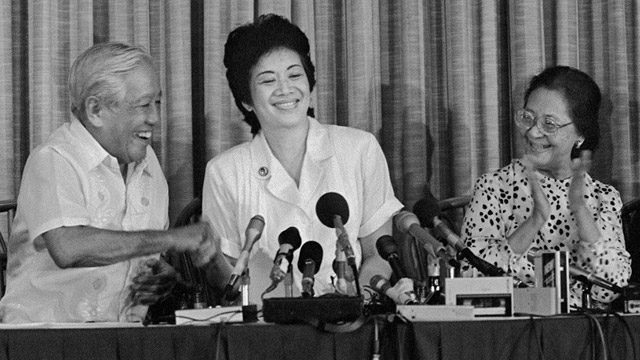 LONDON, United Kingdom – British prime minister Margaret Thatcher granted Corazon Aquino’s request for asylum at the height of the uprising that swept her to power in the Philippines, according to newly declassified files released on Tuesday, December 31.

He had declared victory in a snap election tainted by fraud allegations. READ: (Marcos vs Aquino, and past snap elections around the world)

During the turmoil, Aquino sought sanctuary in the British embassy or the ambassador’s residence in Manila, files released by Britain’s National Archives indicated. (READ: ‘Are we safe here?’ The night Cory Aquino hid in Cebu)

But Britain’s protection was ultimately not needed as Marcos stepped down the following day and the Aquino government was officially recognized.

The asylum request was in a Downing Street file on Britain’s relations with the Philippines spanning from 1981 to 1995.

He said Aquino had asked whether Britain would be prepared to offer sanctuary in the British embassy or residence at 8:00 am local time the following morning – midnight in Britain.

Appleyard said Aquino had rejected sanctuary with the Americans and the Japanese, but turned to the British “because they are ‘friendly and reliable.'”

It was thought the request was a contingency in case the situation turned ugly.

Appleyard said Aquino had widespread support and was “almost certainly deprived of the presidency by fraud,” while the move would ensure warm relations with the likely next government.

But Britain feared it could not effectively guarantee her safety and the ambassador’s residence would be “impossible to defend” against government forces.

The residence would become the focus for “massive demonstrations of support” by her backers and opponents alike, with the risk of armed clashes, Appleyard wrote.

Aquino would in effect try to conduct a provisional government from the residence and therefore Britain would be involved in the country’s internal politics.

Britain’s foreign minister at the time, Geoffrey Howe, considered any offer of sanctuary as an “illusory gesture” which could drag Britain into Philippine internal affairs.

But Powell swiftly replied later that evening, with Thatcher’s approval “to offer such refuge as we have,” but warned: “For obvious reasons, we cannot guarantee Mrs Aquino’s safety.

“But we would not deny her what refuge we can offer if, on reflection she maintains her request.”

Ultimately, Marcos quit at around 9:00 pm on February 25.

Relations between Aquino and Thatcher appeared to be warm in the following years.

The files contained a September 25, 1987 letter from the president to the prime minister thanking her for the “thoughtful gift” of a book on the history of Downing Street.