Jan 1, 2020 4:42 PM PHT
Agence France-Presse
Facebook Twitter Copy URL
Copied
Security forces inside fire tear gas at the protesters, several of whom are reported wounded and ferried away by ambulances 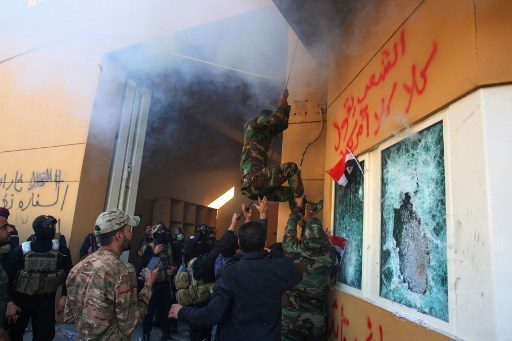 BAGHDAD, Iraq – Security forces at the US embassy in Baghdad fired tear gas early Wednesday, January 1, to disperse pro-Iran demonstrators who had spent the night outside the mission’s gates, an AFP photographer said.

Thousands of supporters of Iraqi armed factions close to Iran had massed at the embassy on Tuesday, December 31, in outrage over US air strikes that killed 25 pro-Iran fighters at the weekend.

They marched easily through checkpoints in the usually high-security Green Zone to reach the embassy, broke through a security reception area and scribbled graffiti in support of Tehran.

Setting up some 50 tents and even portable bathrooms, hundreds of demonstrators announced a sit-in at the embassy’s gates until US forces are ousted from the country.

On Wednesday morning, the crowds drew closer to the single wall separating them and the larger diplomatic compound, setting US flags on fire.

In response, security forces inside fired tear gas at the protesters, several of whom were reported wounded and ferried away by ambulances.

A cordon of Iraqi security forces that had formed around the embassy dissipated when the gas was fired.

But reinforcements from the federal police soon arrived and the brief skirmishes calmed.

The US has blamed Iran for the attack but also pressured Iraqi security forces to step up, alarmed that the mobs were able to reach the embassy so easily. (READ: Trump threatens Iran after Baghdad embassy attacked)

Defense Secretary Mark Esper said around 750 troops from a rapid response unit of the 82nd Airborne Division were prepared to deploy over the next several days to the region in response to the unrest.

Prior to the announcement, a US official told AFP that “up to 4,000 (troops) may ultimately be deployed”.

Overnight, the US flew a rapid response team of Marines into the embassy to reinforce security there.

No US personnel were injured and US officials said there were no plans to evacuate the mission.

Ambassador Matthew Tueller, who had been on holiday, was said to be on his way back to the embassy.

By Wednesday morning, Iraqi security forces had reimposed normal security measures along the perimeter of the Green Zone, which is usually inaccessible without a badge.

But they did not oust the crowds that had spent the night inside.

The mob attack put a focus on the strained US-Iraqi relationship, which officials from both countries have described to AFP as the “coldest” in years.

Baghdad has close ties to both Iran and the United States and has feared being caught in the throes of escalating tensions between the two sides.

The dramatic developments outside the embassy on Tuesday sparked comparisons with both the 1979 hostage crisis at the US embassy in Tehran and the deadly 2012 attack on the US mission in Libya’s Benghazi. – Rappler.com