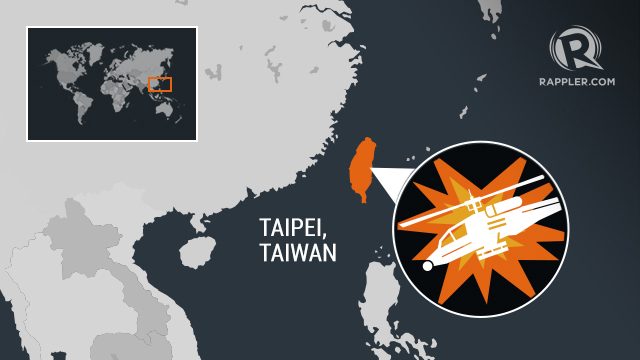 TAIPEI, Taiwan (5th UPDATE) – Taiwan’s military chief was killed in a helicopter crash on Thursday, January 2, the defense ministry said, just days before the island goes to polls to elect a new president.

The chief of the general staff, Shen Yi-ming, was among 8 senior officers – including 3 major-generals – who died when their Black Hawk helicopter smashed into mountains near Taipei.

The 62-year-old general and his entourage were on a routine mission to visit soldiers in northeast Yilan county for the upcoming Lunar New Year when the incident happened.

Flags at all military units will fly at half-mast for 3 days as Shen was the highest-ranking military official to die while on official duty, the government said.

Lieutenant-general Tsao Ching-ping, one of 5 survivors, told rescuers in footage broadcast on local TV: “I am okay…two others are injured and only I can walk.”

“There is one more person who’s more seriously wounded and 2 or 3 people in the cabin…while two more with no signs of life.”

President Tsai Ing-wen’s office said that she will cancel all campaign activities for 3 days after the tragedy. The ruling Democratic Progressive Party will also suspend campaigning for 3 days.

Tsai is seeking a second term against Kaohsiung city mayor Han Kuo-yu of the Kuomintang (KMT) party in the January 11 elections when Taiwan will also elect a new parliament.

Han and the KMT also expressed condolences to the victims and announced that they will stop campaigning for two days.

“Today is a day that we are deeply saddened because several of our most distinguished generals died while on official duty,” Tsai said at a briefing for the incident.

“I’ve asked the defense minister to maintain stable military morale at this time to ensure steady military and defense operations for the safety and stability of our country.”

There have been a number of incidents involving Black Hawk helicopters – purchased from the United States – in recent years in Taiwan.

In 2018 a chopper belonging to a government rescue agency crashed during a medical mission off outlying Orchid Island, killing 6 people on board in an incident attributed to human error.

There were also two crash landings in 2016 and 2018 with no casualties.

Washington has remained Taipei’s most powerful unofficial ally and its leading arms supplier despite switching diplomatic recognition to Beijing in 1979.

“We hope that our steadfast commitment to supporting Taiwan’s security will honor their memory,” US de facto embassy, the American Institute in Taiwan (AIT), said in a statement.

“I was privileged to work closely with General Shen in our joint efforts to strengthen the US-Taiwan security relationship. With his keen insight and good humor, he was a valued leader, colleague and friend. He will be sorely missed,” said AIT director Brent Christensen.

The UH-60M helicopter carrying 13 people disappeared from radar less than 15 minutes after taking off, said Air Force Commander Hsiung Hou-chi, adding that the ministry had set up a task force to investigate the incident.

“We are investigating whether (the cause) was environmental or mechanical,” he told reporters.

The ministry has dispatched ground troops and rescue helicopters to the crash site in northeastern Taiwan. It said survivors will be carried off the mountains for treatment rather than being airlifted due to bad weather. – Rappler.com