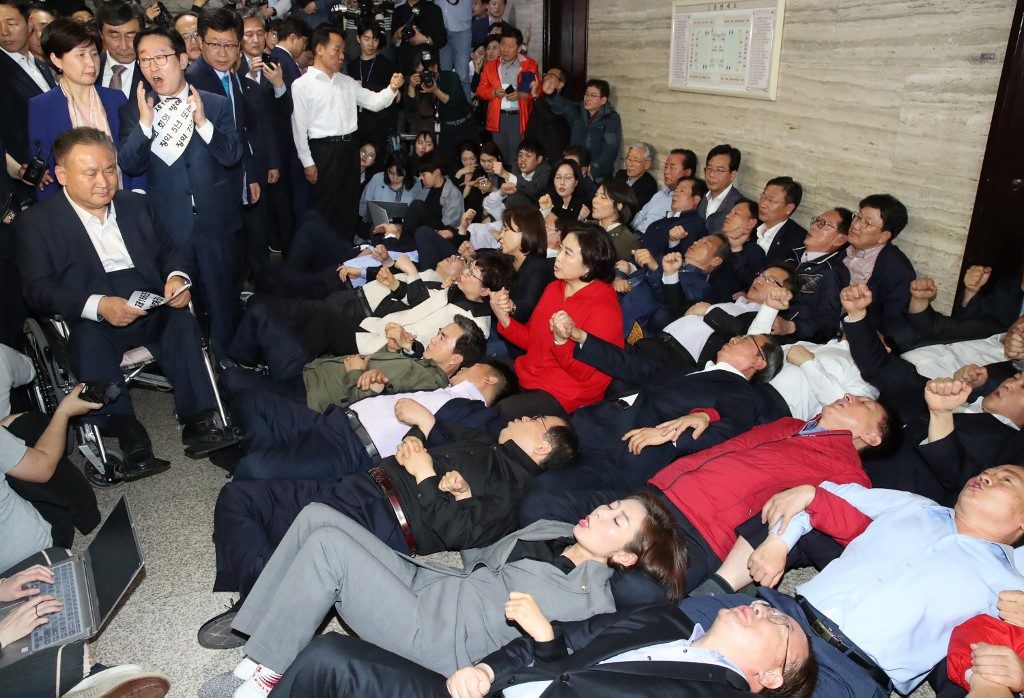 SEOUL, South Korea – South Korean prosecutors on Thursday, January 2, indicted almost 30 MPs and the leader of the main opposition party on assault and other charges over a two-day parliamentary standoff.

In an attempt to stop legislation from being passed, members of the opposition Liberty Korea party (LKP) lay on the floor linking arms to block access to a committee room, and blockaded an MP in his office for 5 hours.

Scuffles broke out as MPs of the governing Democratic party tried to force their way into the hall in April.

Seoul prosecutors indicted the LKP leader Hwang Kyo-ahn and 23 of his MPs – including former parliamentary floor leader Na Kyung-won – on charges including causing a commotion at the national assembly and illegal detention.

Five Democratic party MPs were indicted on accusations of assault.

Among the 29 accused, prosecutors said 18 will face court trials, including Hwang and Na, while the others are likely to be fined without court proceedings as their offenses are considered minor.

The indictment comes 3 months before a legislative election and if any of the MPs are fined 5 million won (US$4,300) or more on conviction, they will be stripped of their seats and barred from standing for re-election for 5 years.

The LKP said the 5-to-24 ratio of charges was “unfair” and “unbalanced,” while Na – who is herself a former judge – condemned the indictment as “politically retaliatory” and claimed it was “top-down ordered” by the administration of President Moon Jae-in.

Score-settling is ingrained in the country’s winner-takes-all political system, with every one of the country’s living former presidents either currently in prison or convicted of crimes after leaving office.

The dispute broke out when the governing party and its allies sought to fast-track a series of reform bills, among them setting up a body to probe corruption by high-ranking officials. – Rappler.com