Jan 2, 2020 10:04 PM PHT
Agence France-Presse
Facebook Twitter Copy URL
Copied
Such support from the ERC, Catalonia's oldest and biggest pro-independence party, would be a clear sign that months of political deadlock in the major European Union country will be coming to an end 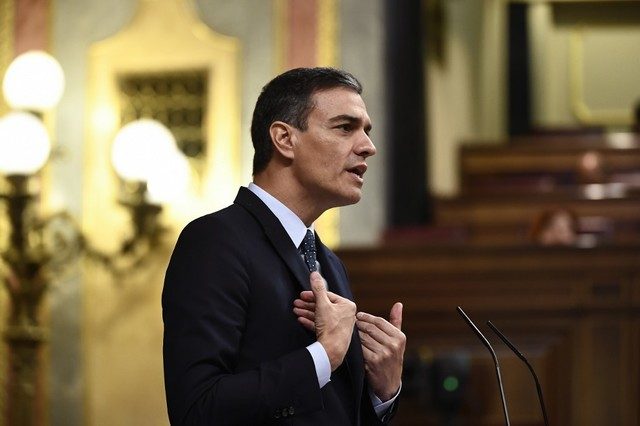 BARCELONA, Spain – A Catalan separatist party is expected on Thursday, January 2, to back the investiture of Spain’s Socialist leader Pedro Sanchez for another term as prime minister.

Such support from the ERC, Catalonia’s oldest and biggest pro-independence party, would be a clear sign that months of political deadlock in the major European Union country will be coming to an end.

The ERC will hold a meeting of its national committee in Barcelona in the coming hours, with an announcement as to whether it will support Sanchez in a confidence vote in parliament next week expected a few hours later.

Barring any last-minute surprise, it is expected to say that its 13 lawmakers will abstain, which would allow Sanchez to stay on in power.

Sanchez’s Socialists won the most seats in a repeat November general election but were weakened, falling far short of an absolute majority in Spain’s 350-seat parliament.

The Socialists have struck an agreement to form a coalition government with far-left party Podemos in what would be the first such power-sharing deal since the country returned to democracy following the death of longtime dictator Francisco Franco in 1975.

The two parties together still fall short of a majority with 155 seats in the assembly. Sanchez has already secured the support of several smaller regional parties and has been negotiating with the ERC.

The ERC has said the Socialists have agreed to set up a negotiation table between Spain’s central government and the Catalan government to find “a democratic solution to the conflict” over Catalonia’s independence drive.

Catalonia has been rocked by protests which sometimes turned violent after Spain’s Supreme Court in October sentenced 9 Catalan leaders to lengthy jail terms over their role in staging a banned secession referendum in 2017 in the wealthy northeastern region that was followed by a declaration of independence.

The leader of the ERC, former Catalan vice president Oriol Junqueras, was among those sentenced.

“The ERC’s leadership is eager to enable Sanchez’s reappointment, but it is afraid of the impact of the decision on Catalan domestic politics,” said Teneo analyst Antonio Barroso.

If the ERC does decide to abstain, Sanchez could secure his investiture in a second confidence vote slated for Tuesday, December 31, when just a simple majority is needed – more yes votes than no.

He would still lose a first confidence vote set for Sunday, January 5, when an absolute majority of 176 votes is needed to pass.

Lawmakers will begin debating Sanchez’s bid to form another government on Saturday, January 4, in a rare weekend session which coincides with the celebration of the Epiphany on January 6, a major holiday in Spain when Christians observe the visit the Three Kings made to the baby Jesus.

Spain, the eurozone’s fourth-largest economy, has been in political gridlock without a proper government for most of the year after two inconclusive elections in April and November.

Until 2015 the country had essentially a two-party system pitting the Socialists against the conservative Popular Party (PP) but the rise of new parties has led to a more fragmented parliament that has made it harder to form a government.

Sanchez came to power in June 2018 after ousting his PP predecessor Mariano Rajoy in a no-confidence vote but he was forced to call elections in April after Catalan separatists refused to back his draft budget.

Those polls were inconclusive and he called a repeat election in November – Spain’s fourth in 4 years – in the vain hope of boosting his party’s standing and sparing him from relying on the Catalan separatists.

Spain’s right-wing opposition accuses Sanchez of being held “hostage” to Catalan separatists by accepting the abstention of the ERC to win the investiture vote.

The ERC, meanwhile, has been criticized by other parts of the separatist movement for cozying up to a government which opposes Catalonia’s secession ambitions. – Rappler.com