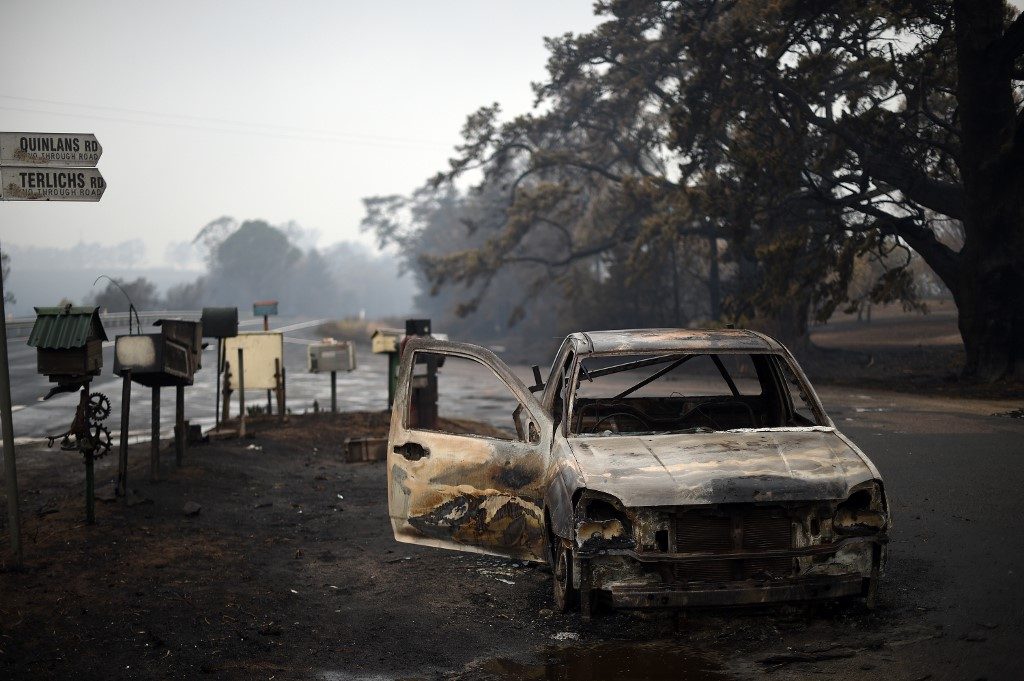 SYDNEY, Australia – Firefighters raced to contain massive bushfires in southeastern Australia Tuesday, January 7, taking advantage of a brief drop in temperatures and some much-needed rainfall before another heatwave strikes later this week.

Exhausted volunteers cleared ground vegetation and carried out controlled burns before temperatures and winds were expected to pick up again by Friday, January 10.

“It really is about shoring up protection to limit the damage potential and the outbreak of the fires over the coming days,” said New South Wales Rural Fire Service commissioner Shane Fitzsimmons.

He described current conditions as “much more favorable” but warned “we are expecting hotter weather to return later in the week.”

Dozens of vast blazes continue to burn out of control across the east of the country and there are growing fears that two fires in New South Wales and Victoria could connect to form another uncontrollable megablaze.

Rainfall on Monday, January 6, offered modest relief, but it was not heavy enough in most areas to extinguish the fires, and in some places it hampered firefighters’ preparations by making back-burning more difficult.

Twenty-five people have died since the start of the disaster in September, more than 1,800 homes have been destroyed, and some 8 million hectares (80,000 square kilometers) has burned, an area the size of Ireland or South Carolina.

Smoke from the fires has been spotted more than 12,000 kilometers (7,400 miles) away in Chile and Argentina, weather authorities in the South American countries said.

The cost of the disaster is still not clear, but the Insurance Council of Australia said claims worth Aus$700 million ($485 million) had already been filed and the figure was expected to climb significantly.

The government has earmarked an initial Aus$2 billion ($1.4 billion) for a national recovery fund to help devastated communities.

Volunteers in bright orange fire suits lined the road as his cortege passed – with the coffin draped in a Rural Fire Service flag.

Conditions in the next week are not expected to match the worst days of the crisis, but Fitzsimmons told public broadcaster ABC it was important not to “get lulled into a false sense of security.”

Many of the blazes are too big to be put out, so only sustained rainfall would end the crisis.

There were some faint signs Tuesday that a reprieve may be on the way, as tropical cyclone Blake brought heavy rain to the northwestern coast.

Blake is not expected to have an impact on the bushfires raging in other parts of the massive country, but could signal a change in hot and dry conditions that have fuelled the fires.

“Hopefully (it is) a signal that we may see monsoon activity which will disrupt the dominant hot air mass continuing to influence so much of the weather.”

In hard-hit communities residents took advantage of the respite to return home and utility firms said they were slowly reconnecting power.

But in the worst-hit areas, like the town of Cobargo, recovery will take much longer.

“There is extensive damage to the electricity network that supplies power from the zone substation to the residents of Cobargo,” said Essential Energy.

“Helicopters are assisting local crews scope what repairs are needed. Extended outages are to be expected.”

Meanwhile, police said they had arrested 3 people for alleged offenses in bushfire areas as the authorities sought to crackdown on isolated incidents of looting.

Anyone, he said, who seeks to take “advantage of their fellow citizens’ disadvantage they should expect the full force of the law.” – Rappler.com