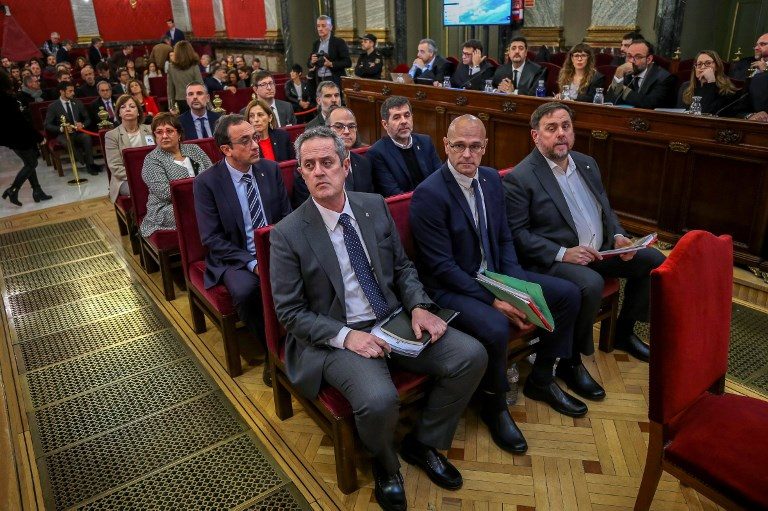 Facebook Twitter Copy URL
Copied
In a long-awaited ruling, the court says it would not authorize Oriol Junqueras' temporary release from prison to collect his parliamentary credentials

MADRID, Spain – Spain’s Supreme Court on Thursday refused to recognize jailed Catalan separatist Oriol Junqueras as a European MP because of his October conviction over a failed 2017 independence bid.

In a long-awaited ruling, the court said it would not authorize his temporary release from prison to collect his parliamentary credentials – in effect rejecting a December ruling by the European Court of Justice (ECJ).

The court said its ruling “implies the suspension of his status as a European parliamentarian.”

Junqueras won a seat in the European Parliament in May elections despite being in pre-trial detention in Spain on charges linked to his role in a banned Catalan referendum and a short-lived declaration of independence.

But he was prevented from leaving prison in June to attend a Spanish swearing-in ceremony and from travelling to Brussels to take up his post, prompting him to file an appeal.

Last month, the ECJ ruled that Spain should have let him out to receive his credentials after the May elections, saying that even jailed MEPs benefitted from parliamentary immunity – a ruling hailed by Catalan separatists.

But in its response to the ECJ, Spain’s Supreme Court decided against allowing him out to collect his accreditation.

It said that the travelling privileges recognised by the ECJ were “not a protective shield against the sentence” and rejected any grounds for the invalidation of the Catalan separatists’ trial, which finished a day before Junqueras was declared an MEP-elect, nor of the resulting sentence.

Speaking to AFP in Brussels, a European Parliament spokeswoman confirmed receiving the ruling and said it would be “read and evaluated” by the relevant authorities.

The ruling provoked an angry reaction from Junqueras’ ERC party, which helped to get Prime Minister Pedro Sanchez through a tight investiture vote two days ago by abstaining.

“Shame on the Spanish justice system, it is a scandal!”, top party official Pere Aragones wrote on Twitter. “You cannot ignore the ECJ ruling.”

Former Catalan regional president Carles Puigdemont, who fled to Belgium after the failed independence bid and received his own MEP accreditation last month, denounced it as “another very serious mistake”, saying Spain was displaying “flagrant disregard” for the ECJ.

The ruling came two days after Junqueras was elected head of the European Free Alliance which with the Greens, comprises the fourth largest group in the European Parliament.

Greens/EFA co-president Ska Keller said she was “surprised” by the decision.

“The sentence against Oriol Junqueras was imposed after his election to the European Parliament. He should have enjoyed immunity,” she said.

“As an elected member of the European Parliament, Oriol Junqueras should be able to take his seat and represent those who voted for him.”

The party’s 13 lawmakers agreed on January 2 to abstain during Tuesday’s confidence vote in a move that allowed Sanchez to be narrowly confirmed as premier with a margin of just two votes.

But holding only 155 of the parliament’s 350 seats, Sanchez’s new coalition government comprising his Socialists and the radical left-wing Podemos will struggle to push through legislation – its first order of business to pass the long-overdue budget.

It was a dispute over the budget in February last year that ended the fragile alliance backing Sanchez’s first government, with Catalan separatists issuing a resounding no in a move that ultimately triggered a general election.

Thursday’s ruling by the Supreme Court also disregarded an advisory opinion issued late last month by the state prosecutor’s office, which said Junqueras should be allowed to travel to carry out the necessary formalities.

But it also said the court should approach the European Parliament “as soon as possible” to suspend his parliamentary immunity. – Rappler.com