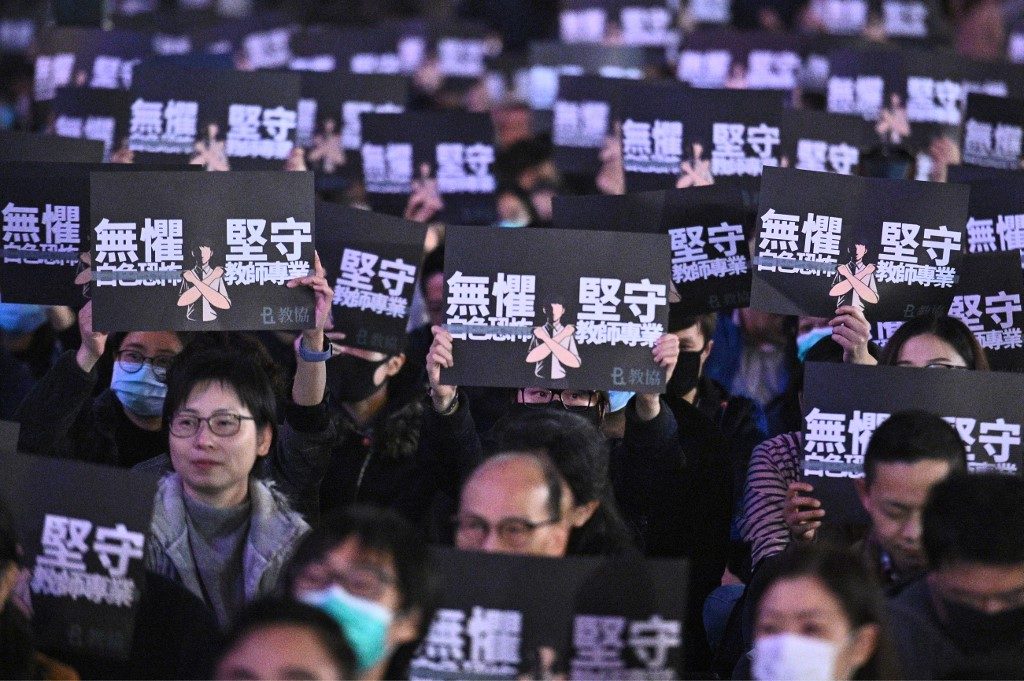 HONG KONG, China – Hong Kong’s teachers say they are living in fear as the city’s democracy protests rumble on, with some not daring to discuss the movement and others anxious they could even lose their jobs if they are caught supporting it.

The education sector has always been at the vanguard of the financial hub’s pro-democracy fight, with teachers and students taking to the streets in 2012 to oppose a government order for schools to teach classes that praised China’s communist history while criticizing democracy movements.

And since the recent wave of protests started last June, police said out of the 6,500 people arrested, about one third are students and around 80 are teachers.

Millions have come out on the streets in demonstrations sparked by opposition to a now-abandoned proposal to allow extraditions to mainland China.

But they morphed into wider demands for greater democratic freedoms and police accountability in the starkest challenge to Beijing since the former British colony was returned to Chinese rule in 1997.

Primary school teacher Nelson is facing disciplinary proceedings for writing Facebook posts critical of the police, telling AFP he is under investigation by the education bureau following an anonymous tip.

Nelson, who asked to be identified with a pseudonym, has no idea who made the complaint although the posts were only viewable to his Facebook friends.

The complainant – who said they were a parent – presented screen grabs of Nelson’s private posts expressing anger at police behavior.

After their own probe, Nelson’s school confirmed he had not discussed politics in class with students – but the education bureau is still pushing him to explain every post.

“I think they (the authorities) have gone too far… When I get off work, I am off duty. Just like the police, when they are off-duty, they can also express their views on Weibo,” Nelson said, referring to the Twitter-like platform.

He has now deactivated his Facebook account and has become extra careful with what he posts on other networks, including not writing the word “police”.

His caution echoes that of some Cathay Pacific staff last year who said they were deleting their social media accounts after former colleagues claimed they were fired for supporting pro-democracy protesters.

Earning over HK$30,000 ($3,900) a month from his first permanent teaching job, Nelson fears losing his post while waiting for the authority’s final verdict.

His and his family’s personal information has also been disclosed online, leading to dozens of menacing calls a day.

“Some threatened that they knew where I live and told me to ‘watch out’,” Nelson said.

Hong Kong’s education chief Kevin Yeung has vowed harsher disciplinary action for arrested teachers – including revoking their teaching licences – and spoke about about what he called “a small number of black sheep in the education sector”.

He told lawmakers that most of the complaints about teachers’ professional misconduct involved “inappropriate messages posted on social media, such as hate, malicious or abusive messages and messages that promote violence”.

Yeung stressed that what the education bureau has been doing did not violate teachers’ freedom of speech because “the moral values displayed by teachers in a private forum is also part of their professional conduct”.

But he has also said “using biased teaching materials” could trigger an investigation, leading to concerns classes about protests, democracy and social justice movements might be risky.

Another teacher Ng said at his school staff dare not talk about the political situation.

“When colleagues gather at the office, even those who are pro-democracy would say, let’s not talk about politics and be vigilant,” the PE teacher told AFP.

By the end of November, the Education Bureau had received 123 complaints against teachers. They upheld 44 of them and took follow-up action, including issuing warning letters, in 13 cases.

Two government school teachers were suspended from their positions, while two others have resigned during probes.

“The government’s mistakes in handling the extradition bill have led to huge conflicts in society. However, it doesn’t admit it’s at fault and shifts the blame onto the education sector and makes us a scapegoat,” Fung said. – Rappler.com