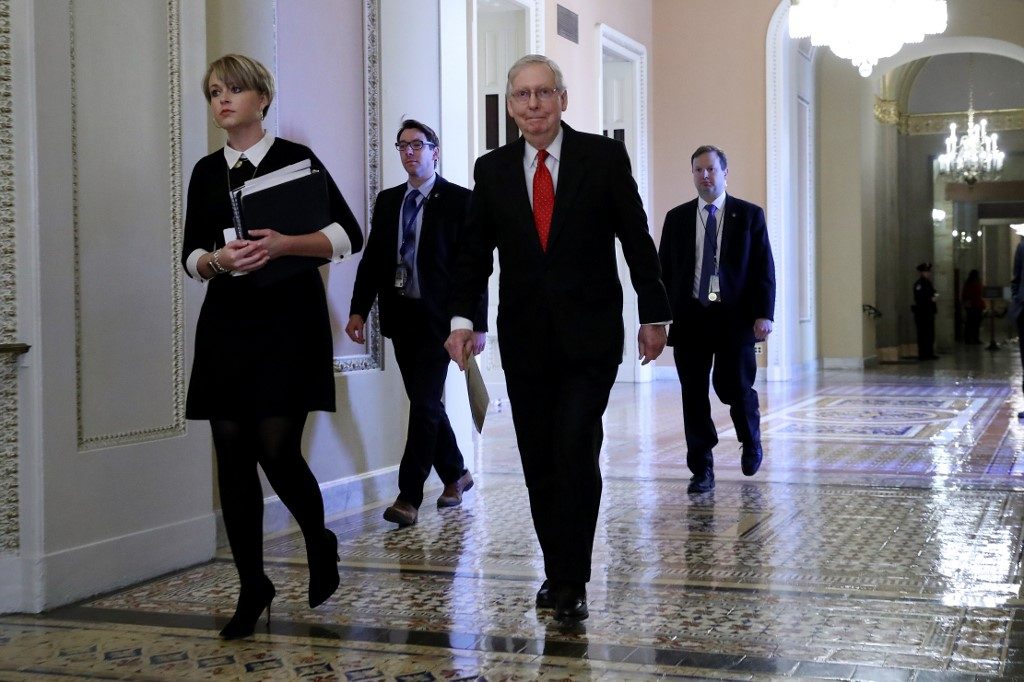 With the US leader facing potential removal from office for abuse of power, his close ally Mitch McConnell laid out ground rules that would block subpoenaing key witnesses or documents while each side makes its case – potentially crippling prosecutors’ arguments.

Flexing his solid 53-47 majority, the Republican Senate leader also made clear he would summarily block any Democratic attempts to change his rules.

Adam Schiff, the leader of the House impeachment managers prosecuting Trump, countered that the process “makes no sense” for a trial, and was designed instead to ensure evidence is never heard and Trump is exculpated.

McConnell’s rules aim to make the case “go away as quickly as possible to cover up his misdeeds,” Schiff said in his opening presentation on the Senate floor.

“It’s completely backwards, trial before evidence,” he said. “Most Americans don’t believe there will be a fair trial.”

Trump was impeached on December 18 by the House of Representatives, and formally charged on the floor of the Senate last week with abuse of power and obstruction of Congress.

It is only the third time a US president has endured an impeachment trial, after Bill Clinton in 1999 and Andrew Johnson in 1868.

Like his two predecessors, Trump looks almost certain to be acquitted by the Senate Republican majority in a trial that could be as short as two weeks.

Showing some compromise, McConnell’s initial draft was modified at the last minute, allowing 24 hours of arguments by each side stretched over 3 days rather than the two-day, 12 hours a day schedule originally outlined.

Republicans also appeared ready to remove a block on the House managers presenting the evidence from their original investigation to the Senate at the beginning of the trial, rather than only after arguments have been made.

But there was no suggestion that McConnell would bend on Democrat demands that witness subpoenas be allowed from the outset.

Democrats want to hear from 4 current and former top Trump aides, including White House Chief of Staff Mick Mulvaney and former national security advisor John Bolton, who have direct knowledge of the accusations against the president.

During the House investigation Trump claimed executive privilege and blocked their testimony, as well as the release of documents subpoenaed by the House.

The articles of impeachment state that Trump tried to pressure Ukraine into interfering in the 2020 election to help him win, and then to thwart the investigation by blocking witnesses and denying documents to the House of Representatives.

Central to the scandal is a July 25 telephone call in which Trump pushed Ukrainian President Volodymyr Zelensky to announce an investigation of former vice president Joe Biden, his potential opponent in the November vote.

Trump is accused of withholding nearly $400 million in military aid for Ukraine’s war against Russian-backed separatists, and refusing Zelensky a White House meeting, unless he opened a probe of Biden.

On Sunday, January 19, Trump’s legal team issued a 110-page defense which claimed the House has accused him of no specific “crime,” that their investigation was a “rigged process,” and that Trump was within his rights to push Ukraine to investigate Biden.

Jay Sekulow, one of Trump’s lawyers, told the Senate Tuesday that the two articles of impeachment have only “a vague allegation about a non-crime allegation of abuse of power and obstruction of Congress.”

The impeachment process is deeply divisive among Americans – with polls showing the country split down the middle on whether the president should be removed from office, 10 months before voters go to the polls to decide whether to re-elect him.

The president himself was in Davos, Switzerland for the World Economic Forum on Tuesday, where he repeated his longstanding characterization of impeachment as a “hoax.”

In Davos, Trump said, “we’re meeting with world leaders, the most important people in the world and we’re bringing back tremendous business.”

“The other’s just a hoax,” he said. “It’s the witch hunt that’s been going on for years and frankly it’s disgraceful.” – Rappler.com