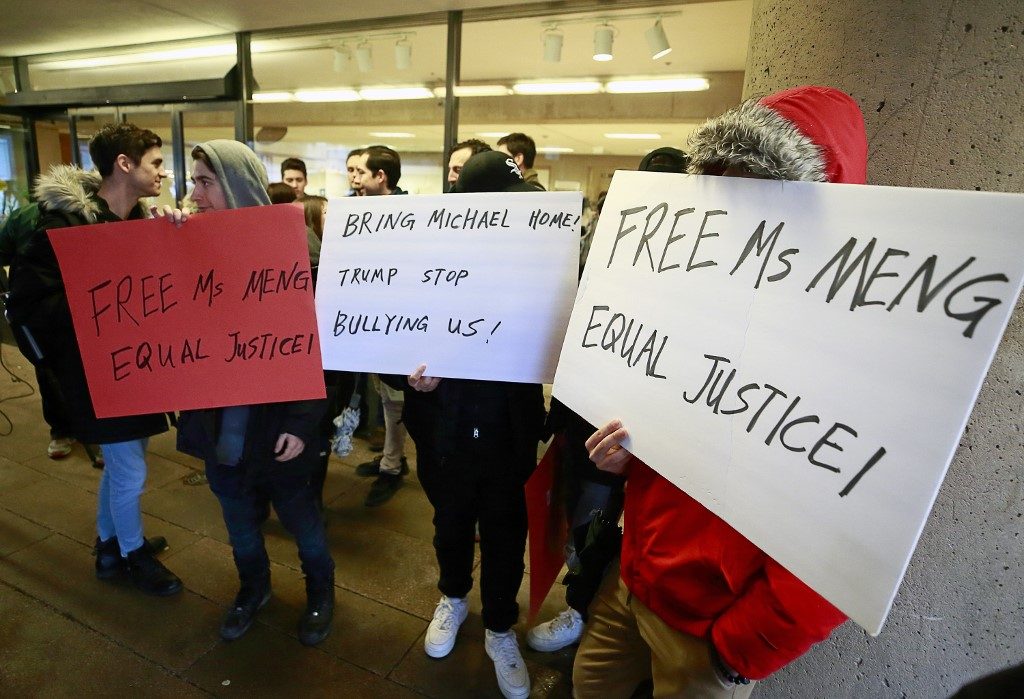 VANCOUVER, Canada – Protestors outside a Canadian courtroom pressing for the release of a senior Chinese telecommunications executive fighting extradition to the US were paid actors, they told local media.

It was not clear, however, who footed the bill.

A dozen men and women on Monday, January 20, at the start of the hearing considering whether or not to hand over Huawei chief financial officer Meng Wanzhou to US authorities to face fraud charges, held up red and white hand-written signs that read “Free Meng” and “Trump stop bullying us.”

They declined to speak to an AFP journalist at the scene.

But later a handful were tracked down and spoke to Canadian media, saying they were paid Can$100 ($76) to Can$150 for two hours’ work that they had understood to be as extras in a movie shoot.

The offer, they said, came through Facebook or acquaintances.

“A CBS reporter approached me and my friend and she started interviewing us. And it was in those moments and questions where I started realizing, OK, if this was background work, they wouldn’t need detail on background people,” Julia Hackstaff told public broadcaster CBC.

After more journalists approached seeking comments, she said she realized that the movie she thought she was appearing in was in fact a very real event.

“I started realizing, wait, no one called ‘action,'” Hackstaff said.

Another protestor, Ken Bonson, gave an identical account to the Toronto Star, saying she “had no idea what I was going into.”

“I’m honestly pretty ashamed and embarrassed,” she said, explaining that she had not known about Meng or her legal saga.

Meng is wanted by US authorities for alleged fraud related to sanctions against Iran.

The US alleges she lied to HSBC about Huawei’s relationship with its Iran-based affiliate Skycom, putting the bank at risk of violating US sanctions against Tehran.

Meng has denied the allegations.

Her extradition hearing is scheduled to last until Friday, then adjourn until a second phase scheduled for June.

Neither China’s embassy in Ottawa nor Huawei responded immediately to a request for comment on the protests. – Rappler.com