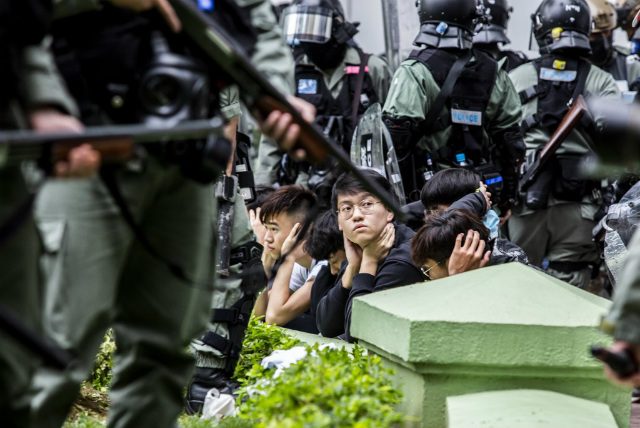 Facebook Twitter Copy URL
Copied
'For those of us who have been fighting at the front lines, we feel we have not achieved anything,' says one frequent protestor

HONG KONG, China – A sharp dip in the frequency and ferocity of Hong Kong’s pro-democracy protests has raised questions over the future of the leaderless movement, rattled by a spike in arrests and increasingly aggressive police tactics.

Like so many Hong Kongers, he has spent much of the last 7 months risking injury and prosecution by attending protests pushing for greater democracy and police accountability. (READ: [ANALYSIS] Hong Kong’s hangover for 2020)

But after 7,000 arrests and little sign of Beijing making any concessions, he wondered whether it was time for a change in tactics.

“We have to think of another way to fight for democracy instead of purely relying on street protests,” he told AFP, waving a flag with the slogan “Liberate Hong Kong, revolution of our times”.

“If we continue our fight against the police on the streets, Hong Kong people beating Hong Kong people, this will pose no threat to Beijing.” (READ: Hong Kong teachers living in fear over protest support)

Similar debates are now raging on online forums, in cafes, bars and across dinner tables – how does Hong Kong’s democracy movement stay alive?

The last 7 months have radically changed the global business hub.

The city is more ideologically divided than ever, its government and police force are loathed by swathes of the population, and the economy is in recession.

After years of peaceful protests failing to achieve much, a new generation of young Hong Kongers have reasoned that violence is the only way to get results.

Had the city’s legislature not been besieged last summer, the plan to allow extraditions to mainland China that sparked the initial protests would have been passed.

Then in November, the pro-democracy camp pulled off a landslide win with a record turnout in district-level elections.

But on the movement’s main demands – an independent inquiry into police conduct, an amnesty for protesters and the right to freely elect Hong Kong’s leader – there has been less success.

And with no recognized leader there is little consensus or direction for the future.

Tony, a 35-year-old member of a group that waves American flags at rallies, said he was worried the movement had lost steam, especially since the local election win.

“Some might feel we have already achieved something and think it’s time to take a little break,” he told AFP.

“But for those of us who have been fighting at the front lines, we feel we have not achieved anything.”

Protests are still commonplace. In early December and on New Year’s Day, hundreds of thousands took to the streets for peaceful marches.

On the weekend police fired tear gas at tens of thousands gathered in a park after masked protesters assaulted a group of plainclothes officers.

But there are now far fewer pitched battles compared with October and November.

Observers say the arrests of 3,000 protesters over those two months dealt a heavy blow to the movement – especially after police trapped hundreds in a university campus siege.

“Many of my friends were arrested, I feel really frustrated.”

The arrival of a new police chief in November has heralded more robust tactics.

Officers have carried out widespread frisking ahead of rallies, repeatedly shutting down sanctioned protests as soon as anyone steps out of line.

During one recent rally, police inside an HSBC branch pounced when radicals started vandalizing the building.

“Tactically, the more preventative approach has worked,” an officer who asked for anonymity told AFP.

“But any closure will ultimately require a political solution.”

But he added that these protests had still achieved major successes with the scrapping of the extradition bill and launch of a popular revolt that will last years.

“Both Hong Kong and the international community have been awakened to the reality that Beijing is a very repressive regime that refuses to budge on some very reasonable demands,” Sing said.

Recent consumer boycotts of businesses deemed to be pro-Beijing – and a push for people to join unions – could snowball this year, he added.

Peter, a 24-year-old fresh graduate, said Hong Kong’s leaders should not mistake the current lull as a victory.

“Police tactics have been successful in terms of arrests, but not on the political front,” he warned. “One day, people will fight back, when our anger next peaks.” – Rappler.com