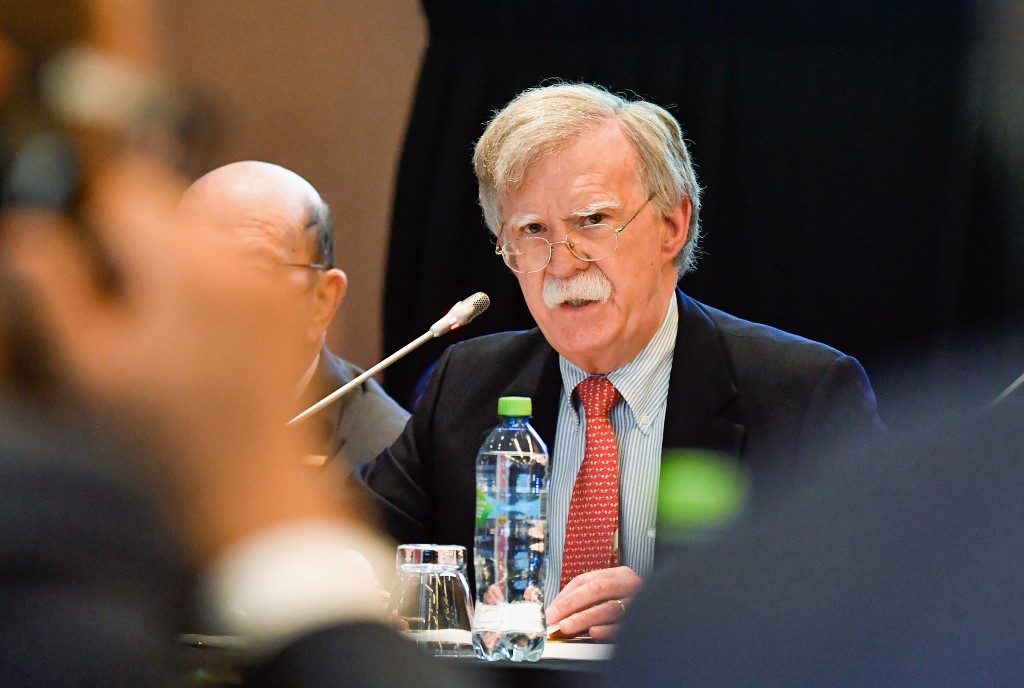 Facebook Twitter Copy URL
Copied
The White House is making an effort to block publication of an explosive book by Bolton, who is the former national security advisor

WASHINGTON, USA – President Donald Trump lashed out on Wednesday, January 29 at John Bolton, a potentially damaging witness at his Senate impeachment trial, amid White House efforts to block publication of an explosive book by the former national security advisor.

The fight over whether Bolton should testify intensified as Trump’s trial entered a new phase, with senators who hold the 45th US president’s fate in their hands directly questioning prosecutors and White House defense lawyers.

The 100 members of the Senate have been sitting silently for 6 days listening to impassioned arguments for and against Trump’s removal from office for abuse of power and obstruction of Congress.

They now have 16 hours over the next two days to submit written questions, which are being read aloud by Supreme Court Chief Justice John Roberts, presiding over just the third impeachment trial of a president in US history.

Democrats have been pressing for the Senate to subpoena Bolton, who was fired by Trump in September, after reports that his upcoming White House tell-all book corroborates the abuse-of-power impeachment charge against the president over his dealings with Ukraine.

Asked whether the 71-year-old Bolton should appear, chief Democratic prosecutor Adam Schiff said his testimony was essential to conduct a “fair trial.”

“Don’t wait for the book,” the California lawmaker told the senators sitting as trial jurors. “This case is overwhelmingly clear without John Bolton but if you have any question about it you can erase all doubt.

“When you have a witness who is as plainly relevant as John Bolton, who goes to the heart of the most serious and egregious of the president’s misconduct, who has volunteered to come and testify – to turn him away, to look the other way, I think is deeply at odds with being an impartial juror,” Schiff said.

White House deputy counsel Patrick Philbin countered that the Democratic-controlled House of Representatives, which impeached the Republican president on December 18, had conducted their inquiry in a “half-baked partisan fashion” and had not issued their own subpoena for Bolton’s testimony.

The White House would seek to prevent his testimony by citing executive privilege and the matter would end up in the courts, he said. “This institution will be effectively paralyzed for months on end.”

In his book, Bolton reportedly writes that the president personally told him in August that a freeze in military aid to Ukraine was directly linked to his demand that Kiev investigate Joe Biden, the frontrunner for the Democratic presidential nomination, and his son Hunter, who served on the board of a Ukrainian gas company.

Trump, in an early-morning tweet, said Bolton had shown poor judgment in a job he had begged for and he hired the veteran diplomat and prominent “hawk” against the advice of others.

Bolton “got fired because frankly, if I listened to him, we would be in World War 6 by now,” Trump said. “(He) goes out and IMMEDIATELY writes a nasty & untrue book. All Classified National Security. Who would do this?”

The White House cited national security in a bid to block Bolton’s book, saying it cannot be published because it breaks secrecy laws.

The warning was made in a letter to Bolton’s lawyer dated January 23 but only made public on Wednesday.

The National Security Council said after preliminary review of the manuscript – a vetting process applied to any White House employees writing books – that it contained “significant amounts of classified information.”

“Some of this information is at the TOP SECRET level,” the NSC said in a letter to Bolton’s lawyer, adding that “the manuscript may not be published or otherwise disclosed without the deletion of this classified information.”

Trump called on Republicans to reject a push for witnesses when the issue comes up for a vote on Friday, January 31.

“Remember Republicans, the Democrats already had 17 witnesses, we were given NONE!” he wrote on Twitter. “Don’t let the Dems play you!”

A two-thirds majority – 67 senators – is needed to convict the president and remove him from office and the Republicans’ 53-47 majority in the chamber virtually assures Trump will be acquitted.

But only 51 senators are needed to call witnesses and Utah Senator Mitt Romney and several other Republicans have said they are leaning to having Bolton and others testify.

Only two other presidents have been put on trial in the Senate – Andrew Johnson in 1868 and Bill Clinton in 1999, and neither was convicted and removed.

Before the explosive revelations about what Bolton knew, the White House had assumed the trial could be wrapped up with no witnesses and an acquittal by this weekend, just in time for Trump’s annual State of the Union address before Congress on Tuesday, February 4. – Rappler.com