IOWA CITY, USA – Democratic candidates bolt on Sunday, February 2, across Iowa, where no handshake or pit stop is too insignificant one day ahead of the state’s presidential nominating process, which is the first in the nation.

Iowa has traditionally served as a vital launching point – or burial ground – for presidential campaigns.

However, Monday’s crunch vote has created an air of suspense, with no clear frontrunner.

Three of the leading candidates seized on a brief break from their duties as jurors in the Senate impeachment trial of President Donald Trump in Washington to rush to Iowa for a flurry of last-minute events.

The impeachment trial – only the third in US history – created an unprecedented situation by limiting the senators’ ability to campaign in Iowa in the closing days before the state’s presidential caucuses.

Sanders, Warren and Klobuchar have to return to Washington on Monday, along with Senator Michael Bennet who trails badly in the polls, for the trial’s resumption.

Senate leaders have scheduled a vote for Wednesday that appears virtually certain to end in Trump’s acquittal on the impeachment charges of abuse of power and contempt of Congress.

Eight of the 11 Democrats still in the race were in Iowa on Saturday.

A good result can propel a candidate to new victories in the states that follow, starting with tiny New Hampshire eight days later. A poor showing can signal the end.

Sanders, at 78 the oldest Democratic candidate, has seen his candidacy buoyed by enthusiastic support among young voters.

His staff organized concerts at his weekend rallies with indie groups Bon Iver and Vampire Weekend, who also performed at his events four years ago.

“We must defeat the most dangerous president in the modern history of America” the Vermont senator told a crowd of several thousand in Cedar Rapids.

“Monday night in Iowa it all begins” he said.

Monday evening, at 7:00 pm (0100 GMT Tuesday or 9 am Philippine time), the state’s more than 600,000 registered Democrats are invited to take part in caucuses at about 1,700 venues – schools, theaters, churches – to publicly express their choice by standing under one candidate’s banner.

The best against Trump

Just as in every presidential year, thousands of volunteers fanned out across the Midwestern farm state of just over 3 million inhabitants to try to convince neighbors or passers-by to vote for their favorite.

At this late date, nearly one Iowa voter in two claimed to still be undecided.

In a home in Iowa City that Warren supporters were using as a base, people streamed in and out, looking for more posters to put up on lamp posts or in yards, or for lists of doors that still needed to be knocked on.

“We are trying to get around the state as much as we can,” Warren told a rally of nearly 1,000 at a high school in Iowa City, adding that the Democratic Party’s job is “to come together to beat Donald Trump.” 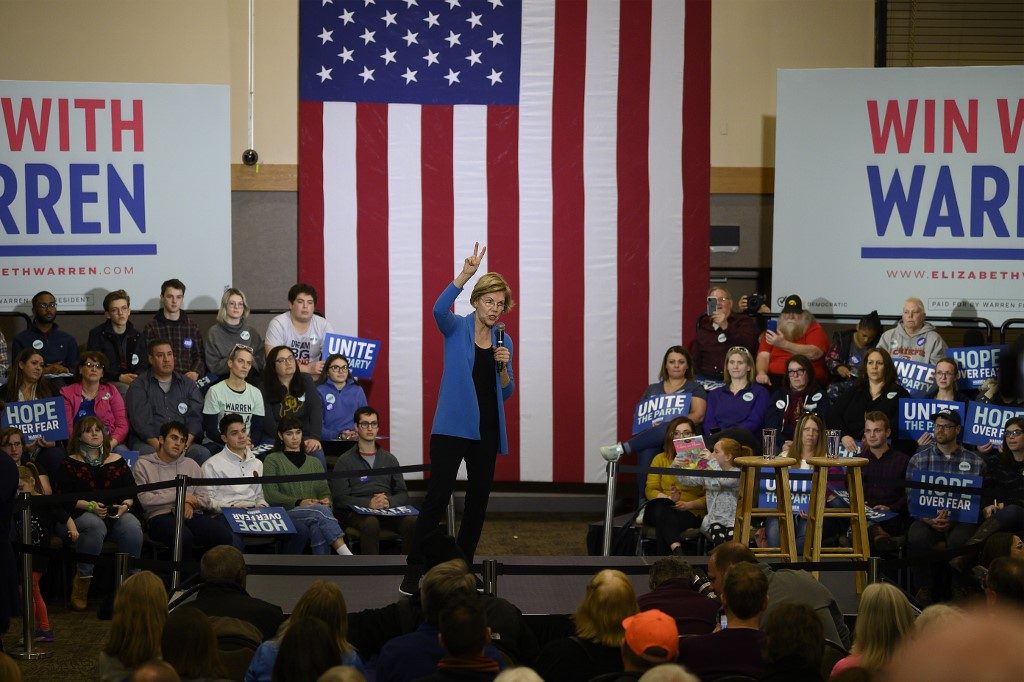 That is the number one argument being made by Biden, former vice president to Barack Obama.

“We need a president who is ready on Day One,” the 77-year-old political veteran has been saying throughout his campaign.

Biden leads in nationwide surveys but trails Sanders in the latest Iowa polling.

Iowans take their politics seriously. They take their role as first-in-the-nation voters to heart, and often, even in the smallest cities, have the chance to meet candidates in person.

Their pick has a recent historical track record of going on to become the Democratic Party nominee.

Like Biden, 38-year-old Pete Buttigieg took advantage of the absence of rivals stuck in the Senate to lay on a heavy schedule of campaigning.

A former consultant, army reservist and onetime mayor of a small Indiana city, “Mayor Pete” portrays his youth as a reason voters should prefer him over the graying Biden. As for Sanders, his politics are too divisive, Buttigieg implies.

His is not the only new face to emerge during the campaign.

Klobuchar, 59, a previously little-known senator, has climbed slowly but steadily in voter polls. She is hoping for a surprise on Monday, boosted in part by the fact that her home state, Minnesota, borders Iowa.

Maria Watt, 42, was leaning toward “Pete” until she decided to switch to “Amy.”

“Either way, we’d be happy to have it be a young person or a female,” the Iowa City voter said Saturday.

“Anyone but an old white guy.” – Rappler.com