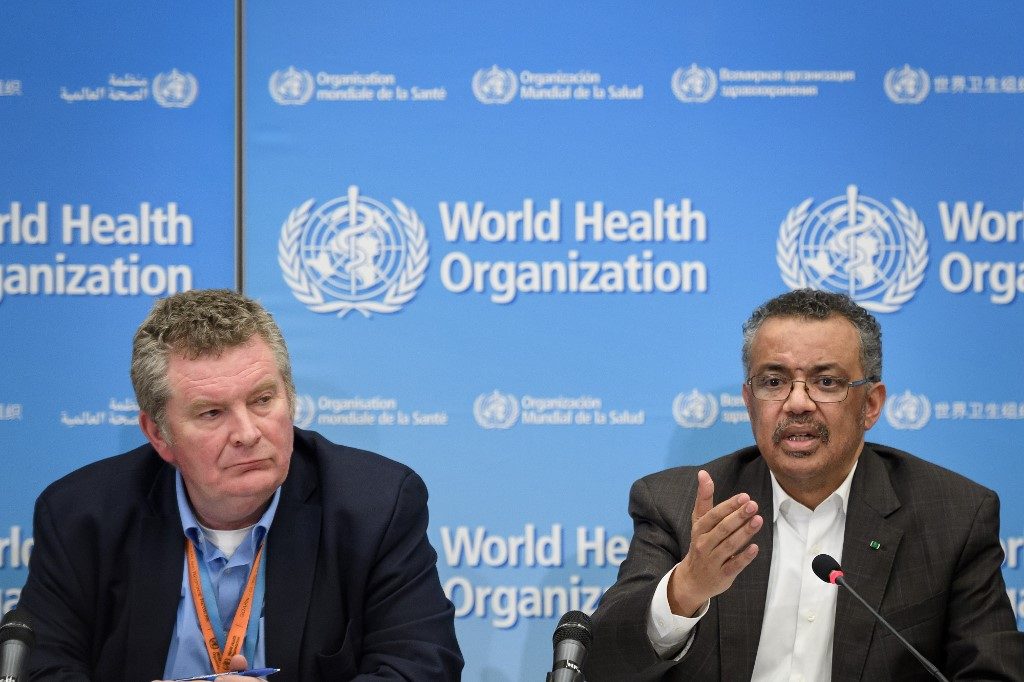 Facebook Twitter Copy URL
Copied
'We have worked with Google to make sure people searching for information about coronavirus see WHO information at the top of their search results,' the World Health Organization says

GENEVA, Switzerland – The World Health Organization said on Monday, February 3, it was working around the clock with internet and social media giants to combat widespread misinformation surrounding the deadly novel coronavirus outbreak.

WHO chief Tedros Adhanom Ghebreyesus warned of the dangers posed by “the spread of rumors and misinformation”as China saw a surge in deaths and infections from the highly contagious virus.

“We have worked with Google to make sure people searching for information about coronavirus see WHO information at the top of their search results,” Tedros said in opening remarks to the UN health agency’s Executive Board meeting in Geneva.

“Social media platforms including Twitter, Facebook, Tencent and Tiktok have also taken steps to limit the spread of misinformation,” he said.

His comments were interrupted by a fit of coughing, but the WHO chief assured the assembly that there was no need to worry: “It is not corona.”

He spoke as the death toll in China surged above 360, surpassing the number of fatalities in the country from the Severe Acute Respiratory Syndrome (SARS) outbreak of 2002-03.

The number of infections in China also jumped signficantly on Monday, passing 17,200.

The 57 confirmed new deaths on Monday was the single-biggest increase since the virus was detected late last year in the central city of Wuhan, where it is believed to have jumped from animals at a market into humans.

The virus has since spread to more than 24 countries, despite many governments imposing unprecedented travel bans on people coming from China. The first foreign death from the virus was reported in the Philippines on Sunday.

WHO warned late Sunday that the 2019-nCoV outbreak “has been accompanied by a massive ‘infodemic’,” which it defined as “an over-abundance of information – some accurate and some not – that makes it hard for people to find trustworthy sources and reliable guidance when they need it.”

The agency said it had risk communication and social media teams “working 24 hours a day to identify the most prevalent rumours that can potentially harm the public’s health, such as false prevention measures and cures”.

The WHO last week declared the crisis a so-called Public Health Emergency of International Concern (PHEIC), with Tedros reiterating Monday that the rare declaration was not taken due to lack of confidence in China’s handling of the situation.

It was “taken primarily because of the signs of human-to-human transmission outside China, and our concern of what might happen if the virus were to spread in a country with a weaker health system,” he said.

WHO has also advised against “measures that unnecessarily interfere with international travel and trade”, at a time when a wide range of countries are advising against travel to China and even closing their borders to people travelling from the country. – Rappler.com