Feb 10, 2020 9:46 AM PHT
Agence France-Presse
Facebook Twitter Copy URL
Copied
By the end of the shooting spree at least 30 people are dead – the shooter included. Many more are wounded, several critically. 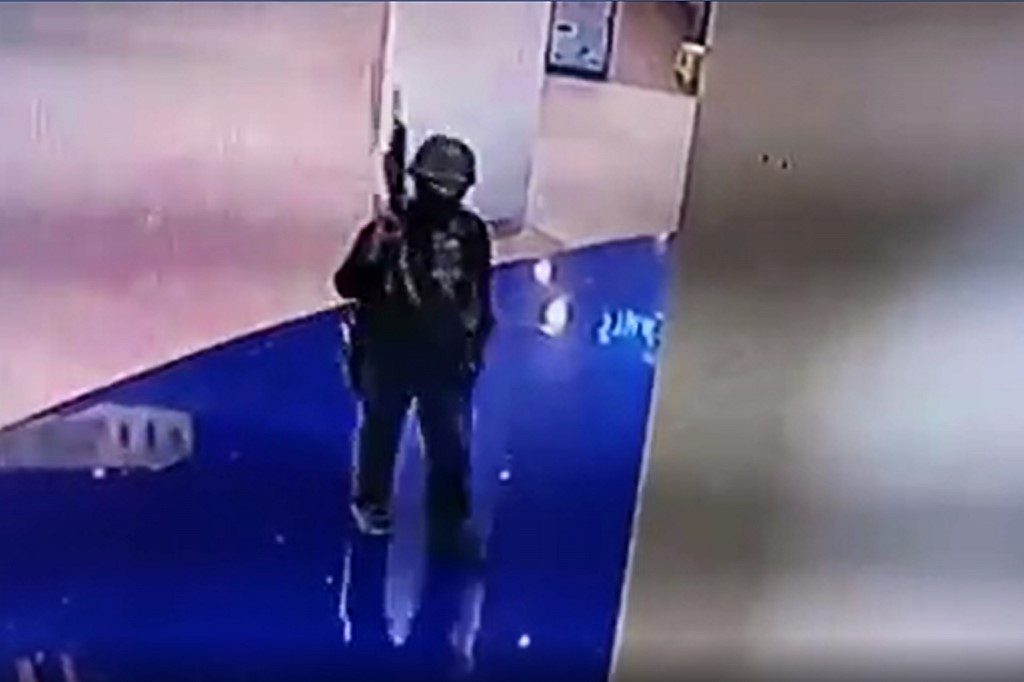 NAKHON RATCHASIMA, Thailand – In a fourth-floor toilet of the Terminal 21 mall, shoppers jammed cubicle doors against the entrance to keep out a Thai soldier on a shooting spree, tracing his movements through fragments of CCTV passed on by friends on the outside.

Barricaded in the women’s toilet with a few dozen others, Chanathip Somsakul, a 33-year-old music teacher, and his wife pored through social media and made frantic calls to friends and family.

Their daughter Chopin sat watchfully on a ledge, a three-year-old bystander to a mass killing without precedent in Thailand.

Nakhon Ratchasima, a mid-size Thai city entwined like much of the northeastern Isaan region by tight family connections and social media networks, quickly began to rally to its own trapped inside.

“A friend who works at the mall was talking to a guy in the CCTV control room…he gave us updates on the location of the gunman,” Chanathip told AFP on Sunday, February 9.

Those details, shared over messaging apps, may have saved the lives of Chanathip, his family and the 20-30 others inside.

But in the swirl of competing information, dread gripped those hidden inside cupboards, storerooms, and toilets across the mega-mall.

“Everyone was terrified and lost. There was so much information going around, people weren’t sure what to believe,” Chanathip added.

For hours, a killer stalked the concourses, the glass-fronted windows of the multi-level mall spider-webbed by bullet holes.

The gunman – a soldier apparently angered by a dispute over the sale of a house – had already slain several people on his way into the shopping center, the largest in the city and packed on the first day of a long weekend.

Sergeant-Major Jakrapanth Thomma swaggered through the mall, a machine gun slung over his shoulder and wearing a helmet and combat gear, in full view of CCTV cameras.

By the end of his spree at least 30 people would be dead – himself included. Many more are wounded, several critically.

Fear snapped through Chanathip’s hideout when someone banged on the toilet door.

“I thought it could be the gunman. A lady asked ‘who is it?’ but there was no answer. She wanted to open the door but we all convinced her not to.”

Chanathip had just finished teaching a music lesson and – like hundreds of others – was eating in the mall with his family when gunfire erupted.

His family took refuge in the women’s toilet. Some men pulled the toilet doors off and wedged them against the entrance.

At 9 pm on Saturday, February 8 they received word from police that they could leave, which they did – in an orderly fashion at first, along with dozens of others.

But gunshots rang out as they reached a car park, sparking a wild sprint.

Inside, scores of others remained trapped, cowering in gym toilets, under restaurant tables, and in store rooms – hoovering up information on the whereabouts of the gunman.

From inside the stockroom of H&M, Aldrin Baliquing, a Filipino teacher in his 40s, meditated to stay calm.

“I was so scared because the shop where we were trapped was just above the establishment where the gunman held his hostages,” he said, referring to unconfirmed reports the rogue soldier had taken human shields.

As police began to clear bullet-riddled cars and rust-red blood stains on the street that had dried in the Thai heat, survivors tried to make sense of a night of terror.

“Everything happened so fast,” Lapasrada Khumpeepong, 13, told AFP during a Sunday vigil for the dead and injured.

She and her mother had been trapped in the bathroom on the ground floor of Terminal 21, cornered there for 5 hours after they tried to flee from the sound of rapid gunfire.

“Thank you to those who sacrificed themselves to keep others alive,” she scrawled on a condolences board at the vigil.

“Without you, we would not be here today.” – Rappler.com