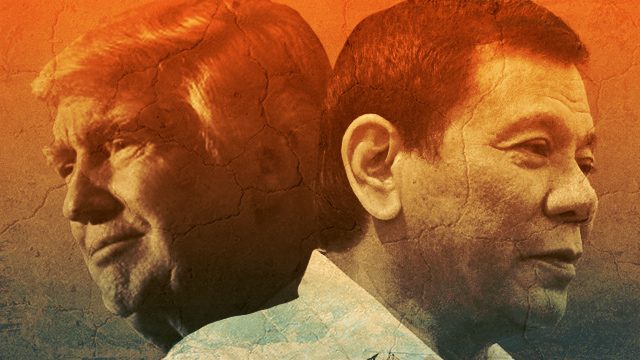 Facebook Twitter Copy URL
Copied
'If they would like to do that, that's fine, we'll save a lot of money,' Trump tells reporters at the White House, touting his 'very good relationship' with Philippine President Rodrigo Duterte

WASHINGTON, USA – US President Donald Trump dismissed concerns Wednesday, February 12, about the Philippines canceling a major military accord, saying the decision would save Americans money.

The 1998 Visiting Forces Agreement (VFA) created a legal framework for the presence of US troops in the Philippines and for organizing joint military exercises.

Manila announced its decision Tuesday, February 11 – a move the US embassy in the Philippines called a “serious step” – touching off a six-month countdown to the end of the deal. (READ: VFA termination a ‘national tragedy,’ says Del Rosario)

“If they would like to do that, that’s fine, we’ll save a lot of money,” Trump told reporters at the White House.

“You know my views are different from other people. I view it as, ‘Thank you very much, we’ll save a lot of money,” he added.

This was the opposite of Duterte’s claim on Monday, February 10, that Trump, along with other top officials, were trying to prevent the abrogation of the VFA.

(I’ll make it public since I’m a public official: Trump and the others are trying to save the Visiting Forces Agreement. I said I don’t want to. One reason is that the Americans are very rude. They are extremely rude.)

Duterte has threatened since his 2016 election to put an end to the Filipino-American alliance, with an eye toward cultivating relationships with Russia or China instead.

He specifically mentioned a desire to do away with the VFA again in January, after the US canceled the travel visa of senator and former national police chief Ronald Dela Rosa.

The VFA is divisive in the Philippines, with leftist and nationalist critics arguing it guarantees preferential treatment for US service members accused of crimes.

Its defenders say ending the agreement would compromise the southeast Asian nation’s ability to defend itself and undermine the US goal of containing Beijing’s ambitions in the South China Sea. – Rappler.com