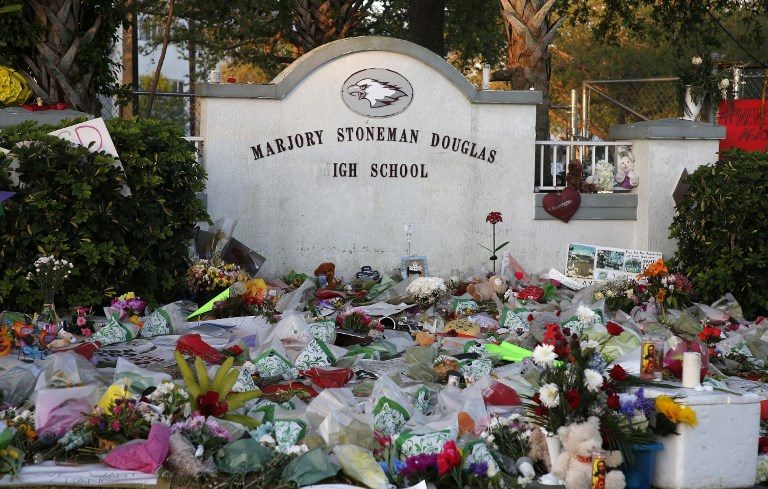 Facebook Twitter Copy URL
Copied
Families attend ceremonies near the site of the massacre in Parkland, Florida, as they observe a minute of silence at 10:17 am for the 17 victims

FLORIDA, USA – Two years after 17 students and faculty members were gunned down in one of the worst mass shootings in US history, survivors from Marjory Stoneman Douglas High School remembered the slain victims on Friday.

Families attended ceremonies near the site of the massacre in Parkland, Florida, as schools across the country observed a minute of silence at 10:17 am (1517 GMT) for the 14 students and 3 staff murdered by an ex-pupil. (READ: ‘You’re all going to die’: Parkland shooter’s phone videos released)

“Two years ago at approximately 7 am, I sent my two children to school. I was so busy rushing them out the door so that they would not be late that my final words were not ‘I love you,'” tweeted Fred Guttenberg, whose daughter was among the dead.

“Jesse came home that day. Jaime did not.”

The shooting actually began around 2:20 pm on February 14, 2018 but organizers chose 10:17 am, with the minutes past the hour representing the 17 victims.

“A lot of my friends have post-traumatic stress disorder,” said Jillian Gelfand, a former student who was not in the building the day of the massacre.

“This is something that we are going to carry with us for a very long time,” the 19-year-old added.

Spiritual leaders from multiple denominations held an afternoon service near the high school at a park, which was a meeting place for the mourners, many of whom wore maroon shirts in honor of the school’s colors, some with the names of the victims or anti-gun messages on the back.

The shooting inspired Parkland survivors to lead the March for Our Lives movement in support of legislation to prevent gun violence, chronicled in the documentary “Us Kids,” which debuted at last month’s Sundance Film Festival.

Director Kim A. Snyder told Agence France Presse the Parkland survivors were not “unlike a lot of amazing young people” that have started up high-profile social justice campaigns.

The documentary is told from the perspective of the students, whose fury, pain and frustration can be seen “transforming… into sheer action and determination and hope,” Snyder said.

There were a record 417 mass shootings in the United States in 2019, according to the research group Gun Violence Archive. – Rappler.com