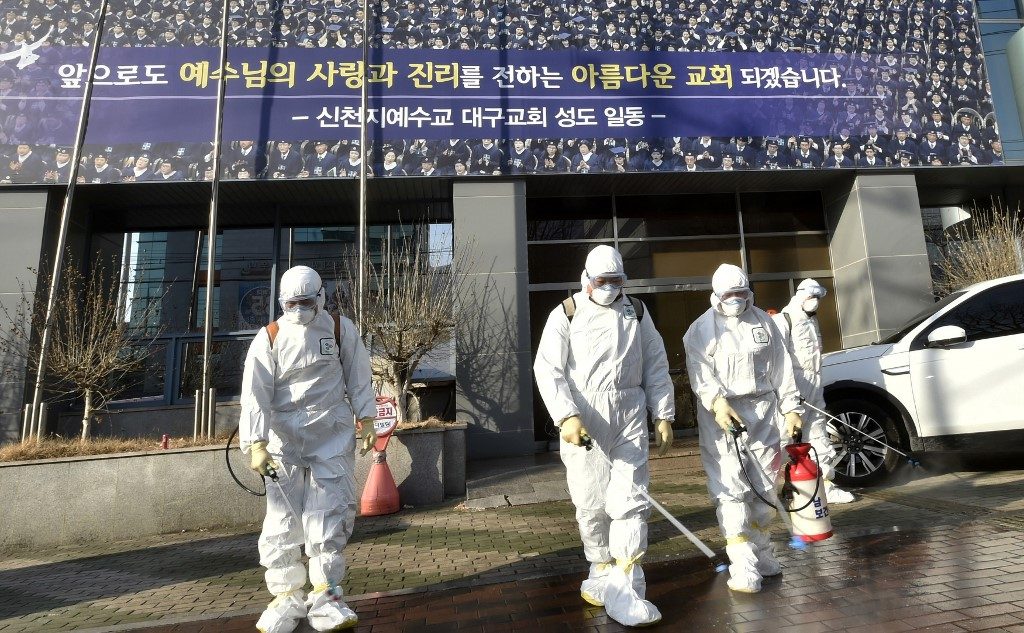 SEOUL, South Korea (UPDATED) – South Korea reported its first death Thursday, February 20, from coronavirus as the number of infections nearly doubled to over 100 – almost half of them from a cluster centered on a religious sect.

The sharp rise came as the mayor of Daegu – South Korea’s fourth biggest city, with a population of over 2.5 million – advised residents to stay indoors, and commanders at a major US base in the area restricted access.

The Korea Centers for Disease Control and Prevention (KCDC) announced a total of 51 new confirmed cases, taking the nationwide total to 104.

Of those, more than 40 were in a cluster in Daegu centered on the Shincheonji Church of Jesus, an entity often accused of being a cult.

A man in his 60s in neighboring North Gyeongsang province – who Yonhap news agency said had been hospitalized for more than 20 years – tested positive for the coronavirus after dying Wednesday, February 19, following symptoms of pneumonia, authorities said.

The Daegu sect cluster began with a 61-year-old woman who first developed a fever on February 10 but attended at least 4 services before being diagnosed.

Local media said she had twice refused to be tested for the coronavirus on the grounds she had not recently travelled abroad.

So far at least 47 other members of the sect have been confirmed as infected, with more cases also believed to be linked to the woman.

Shincheonji claims its founder, Lee Man-hee, has donned the mantle of Jesus Christ and will take 144,000 people with him to heaven on the day of judgement.

Daegu’s municipal government said 1,001 Shincheonji members believed to have attended services with the infected woman have been asked to self-quarantine.

A total of 64 cases have been confirmed in the city and neighboring North Gyeongsang province, and Daegu mayor Kwon Young-jin urged residents: “Starting from today, please refrain from leaving your house as much as possible.”

The emergency units at all 4 general hospitals in Daegu have been closed as a precaution, a city official told Agence France-Presse.

The mayor’s request is not binding but one online poster who said they were in the city tweeted: “I can’t go out because of Shincheonji and it’s driving me crazy.

The US Army garrison in the city – where around 10,000 soldiers, civilians and family members live or work – restricted access and instructed any American troops who had recently attended Shincheonji services to self-quarantine.

“Travel in and around Daegu is highly discouraged unless absolutely necessary,” the garrison said Thursday in a Facebook post.

Shincheonji closed down all its facilities nationwide.

“We are deeply sorry that because of one of our members, who thought of her condition as a cold because she had not travelled abroad, led to many in our church being infected and thereby caused concern to the local community,” it said in a statement. – Rappler.com