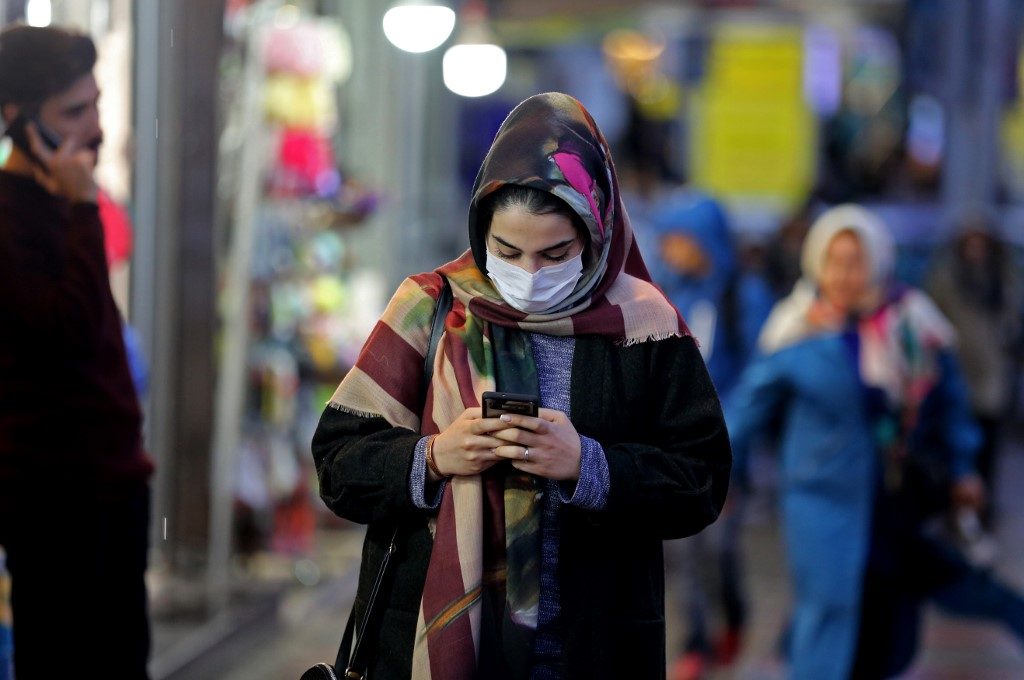 Facebook Twitter Copy URL
Copied
(UPDATED) Iranian authorities order the closure of schools, universities and other educational centers in Qom and the nearby city of Arak

TEHRAN, Iran (UPDATED) – Iran on Saturday, February 22, ordered the closure of schools and universities in two cities hit by a coronavirus outbreak that has killed 5 people in the Islamic republic – the most outside the Far East.

The move came as Iranian authorities reported one more death among 10 new cases of the virus.

Since it emerged in December, the new coronavirus has killed 2,345 people in China, the epicenter of the epidemic, and 16 elsewhere in the world.

The COVID-19 outbreak in Iran first surfaced on Wednesday, February 19, when authorities said it claimed the lives of two elderly people in Qom, a Shiite holy city south of the capital.

They were the first confirmed deaths from the disease in the Middle East.

“One of the new cases has unfortunately passed away,” he added, noting that 8 of them had been hospitalized in Qom and two in Tehran, without specifying where the death occurred.

The latest cases take to 28 the total number of confirmed infections in Iran.

Based on official figures, nearly 18 percent of those infected with the new coronavirus in Iran have died, compared with little more than three percent in China.

As a “preventive measure”, authorities ordered the closure of schools, universities and other educational centers in Qom and the nearby city of Arak from Sunday, state television reported.

The World Health Organization has expressed concern over the speed at which COVID-19 has spread in Iran, as well as it being exported from the Islamic republic to other countries including Lebanon.

“The concern is… that we have seen an increase in cases, a very rapid increase in a matter of a few days,” said Sylvie Briand, director of the WHO’s global infectious hazard preparedness department.

“We are just wondering about also the potential of more exported cases in the coming days,” she added.

The Iranian outbreak emerged in the lead-up to a parliamentary election on Friday, February 28.

State media said the disease had failed to dampen “the revolutionary zeal of Qom’s people” to turn out to vote.

Iranians have been snapping up surgical face masks in a bid to avoid catching the virus.

Online retailer Digikala  – Iran’s equivalent of Amazon – said on Friday, February 21 that it had sold 75,000 masks within a 36-hour period.

It said it was not claiming a commission on its mask sales, amid concerns that demand was causing prices to skyrocket on the black market.

“Besides the high demand, we stand against the unusual price increase,” Digikala tweeted.

“We stand alongside our dear suppliers and by providing fresh supplies, we hope we can meet a part of the country’s demand.”

The health ministry said tests had been carried out on 785 suspected coronavirus cases since the outbreak began.

“Most of the cases are either Qom residents or have a history of coming and going from Qom to other cities,” its spokesman said.

Iran has yet to confirm the origin of the outbreak, but one official speculated that it was brought in by Chinese workers.

“The coronavirus epidemic has started in the country,” state news agency IRNA quoted the health ministry’s Minoo Mohraz as saying.

“Since those infected in Qom had no contact with the Chinese … the source is probably Chinese workers who work in Qom and have traveled to China,” she added.

But the official did not provide any evidence to support her claim, and it has not been reported elsewhere in Iranian media.

All of those who lost their lives are believed to be Iranian citizens.

Qom is a centre for Islamic studies and pilgrims, attracting scholars from Iran and beyond.

Following the announcement of the deaths, neighboring Iraq on Thursday clamped down on travel to and from the Islamic republic.

The Iraqi health ministry announced that people in Iran were barred from entering the country “until further notice”.