Feb 25, 2020 9:23 AM PHT
Agence France-Presse
Facebook Twitter Copy URL
Copied
Bahrain shuts 3 schools after a man who had transported children to the institutions tested positive after returning from Iran 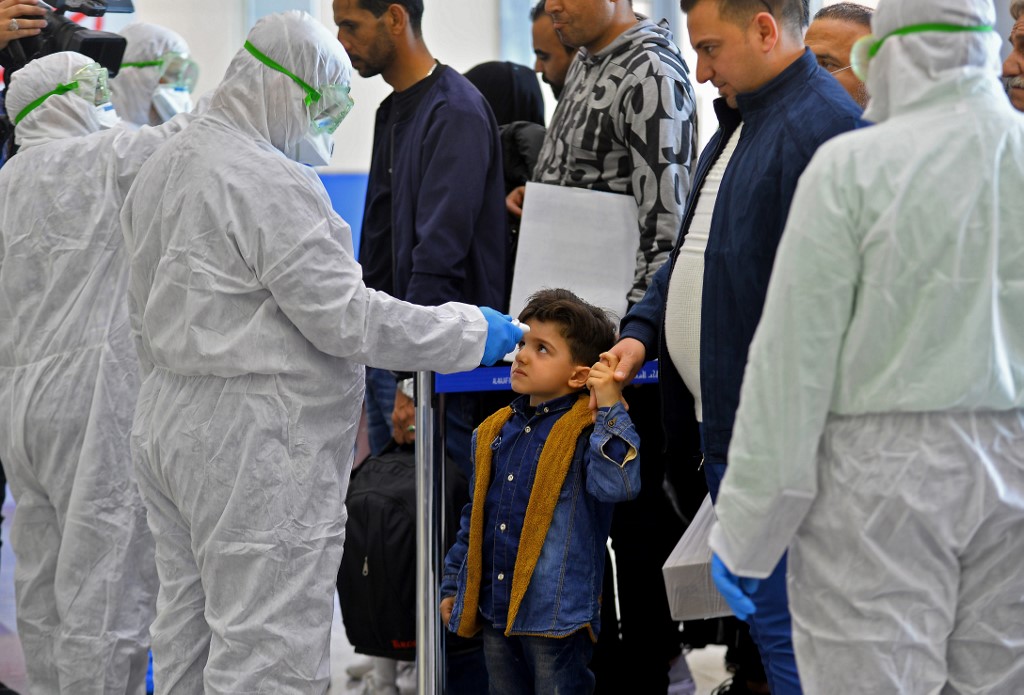 Kuwait, for its part, called off Tuesday and Wednesday celebrations for the Gulf state’s national day, as it confirmed its first 3 cases of the virus, all connected to Iran.

Oman halted flights to and from the Islamic republic  – which is battling the deadliest outbreak outside China – with immediate effect.

The move came shortly after two Omani women who had returned from Iran were diagnosed with the disease.

The 3 cases in Kuwait and the one in Bahrain were also in individuals who had returned from Iran, where the virus has claimed the lives of 12 people.

Bahrain shut 3 schools after a man who had transported children to the institutions tested positive after returning from Iran on February 21 via Dubai airport, the health ministry said.

In Kuwait, a 53-year-old Kuwaiti, a 61-year-old Saudi national, and a 21-year-old stateless Arab who tested positive had all returned from Iran’s holy city of Mashhad, the health ministry said.

In Iraq, the virus was confirmed in an Iranian national studying in the southern shrine city of Najaf, health officials said.

All 7 bourses in the oil-rich Gulf states were down on Monday as fears of a pandemic hit crude prices. The Saudi stock exchange led the slide, shedding 2.95%.

Iran’s confirmed death toll rose to 12 on Monday, with the government promising transparency and dismissing a lawmaker’s claim the toll could be as high as 50.

The outbreak has prompted travel bans from nearby countries.

Last week, Kuwait banned entry of all ships from the Islamic republic and suspended flights to and from the country.

Over half of Bahrain’s population of under one million are Shiites, who also travel frequently to Iran.

The United Arab Emirates has already announced 13 cases of the novel coronavirus, all of them foreigners. The latest were a 70-year-old Iranian man, whose condition is unstable, and his 64-year-old wife.

On Monday, Abu Dhabi authorities called on all UAE citizens “to not travel to Iran and Thailand at present and up until further notice” as part of its efforts to monitor and contain the disease.

UAE airlines have suspended most flights to China – where the virus first emerged in December – except to the capital Beijing, but have not yet taken any measures to restrict travel to and from Iran. Around half a million Iranians live and work in the UAE.

Two Gulf states – Saudi Arabia and Qatar – remain free of the virus, but all have suspended flights to China.

Qatar Airways said on Monday that people arriving from Iran and South Korea would be asked to stay in home isolation or a quarantine facility for 14 days.

China’s death toll from the disease – officially known as COVID-19 – rose to nearly 2,600 on Monday, while the virus has now spread to more than 30 countries.

The World Health Organization said Monday that COVID-19 had “peaked” in China but warned the surge in cases elsewhere was “deeply concerning” and all countries should prepare for a “potential pandemic.” – Rappler.com