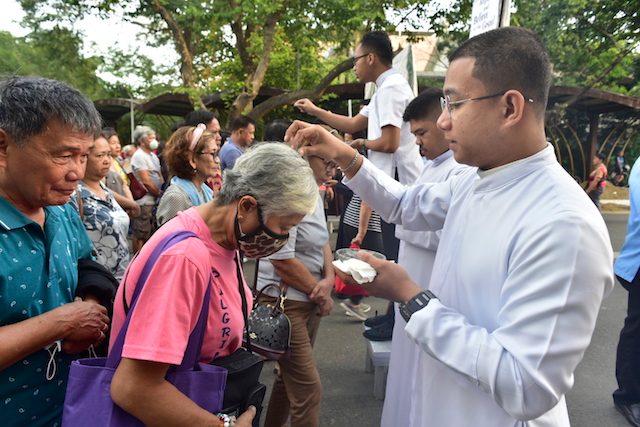 Facebook Twitter Copy URL
Copied
The situation in Asia shows how even religious practices, unchanged for centuries, have to take a backseat temporarily to help stop an epidemic

SINGAPORE – Empty churches ushered in the Catholic season of Lent in Singapore on Wednesday, February 26, as public Masses remained suspended to avoid the spread of the novel coronavirus disease called COVID-19.

COVID-19 has disrupted Ash Wednesday, however, for millions of Catholics in affected Asian territories. Asia is the region hardest hit by the novel coronavirus that originated in Wuhan, China.

The situation in Asia shows how even religious practices, unchanged for centuries, have to take a backseat temporarily to help stop an epidemic.

In South Korea, where 5.8 million people or 11.1% of the population belong to the Catholic Church, Masses have been suspended from February 26 to March 10.

In Singapore, while the government has not banned religious gatherings, it was the Roman Catholic archbishop himself, William Goh, who decided to cancel public Masses for an indefinite period starting February 15. There are around 300,000 Catholics in Singapore, a city-state of 5.7 million people.

The suspension of Masses is a deeply emotional issue for Catholics here. Many of the faithful here, a Chinese majority country, are converts who take their faith more seriously than cradle Catholics.

The woman, whom Heng called Maria (not her real name), exclaimed over the phone, “Why no Masses?! How are we to go on? Why? Has Jesus abandoned us?” Heng, who pacified Maria, said Catholics should spend this time reflecting, “Do I value the Mass more deeply through this period of ‘suspension’?”

In Hong Kong, the interim leader of the Catholic Church, Cardinal John Tong, made a similar decision to suspend public Masses, including the one on Ash Wednesday.

Hong Kong has 399,000 Catholics, 44% of whom are migrants from predominantly Catholic Philippines.

Catholics in these countries now have to rely on online Masses. In Singapore, the archbishop will instead lead an Ash Wednesday Mass that will be livestreamed on https://youtube.com/catholicsg at 7:30 pm on February 26.

Catholics in Singapore can also collect ashes on their own. The Archdiocese of Singapore said at least 3 parishes will distribute individual packs of blessed ashes, which will be given out on a first-come, first-served basis:

The Church of the Sacred Heart, for example, said Catholics can “follow the Mass online and mark themselves with the ashes during the livestream Mass.” The parish announced on Facebook, “Recite the words, ‘Remember, that you are dust, and to dust you shall return,’ or ‘Repent, and believe in the Gospel,’ as you mark yourselves with the ashes.”

While the Philippines only has 3 COVID-19 cases and the government has allowed public gatherings, the Catholic Church said it is taking no chances.

The head of the Catholic Bishops’ Conference of the Philippines, Davao Archbishop Romulo Valles, recommended a deviation from the usual practice of marking foreheads with ashes. To minimize physical contact and prevent the spread of COVID-19, Valles urged parishes to instead sprinkle ashes on the crown of the head.

Valles said this sprinkling of ashes calls to mind the anointing on the crown of the head, which Catholics received at baptism. He said these ashes “signify our repentance from sin, which has marred the grace of baptism.”

Eight out of 10 Filipinos belong to the Catholic Church, and millions of people in this former Spanish colony troop to churches on Ash Wednesday.

“As we begin the season of Lent, we are reminded of the constant call for renewal in our Christian life by self-control (fasting and abstinence), generosity and charity (almsgiving), and prayer. Our charity is also expressed in our concern for the well-being of our brothers and sisters, thus our utmost care and efforts towards the prevention of the spread of COVID-19,” Valles said.

“More than where the ash is imposed and in what manner, the meaning is the same. The ashes imposed on us is a call to humility and repentance,” Pabillo said. “Let us not be side-tracked by the coronavirus in living the season of grace this Lent.” – Rappler.com