Malaysian king hits back at Mahathir amid crisis 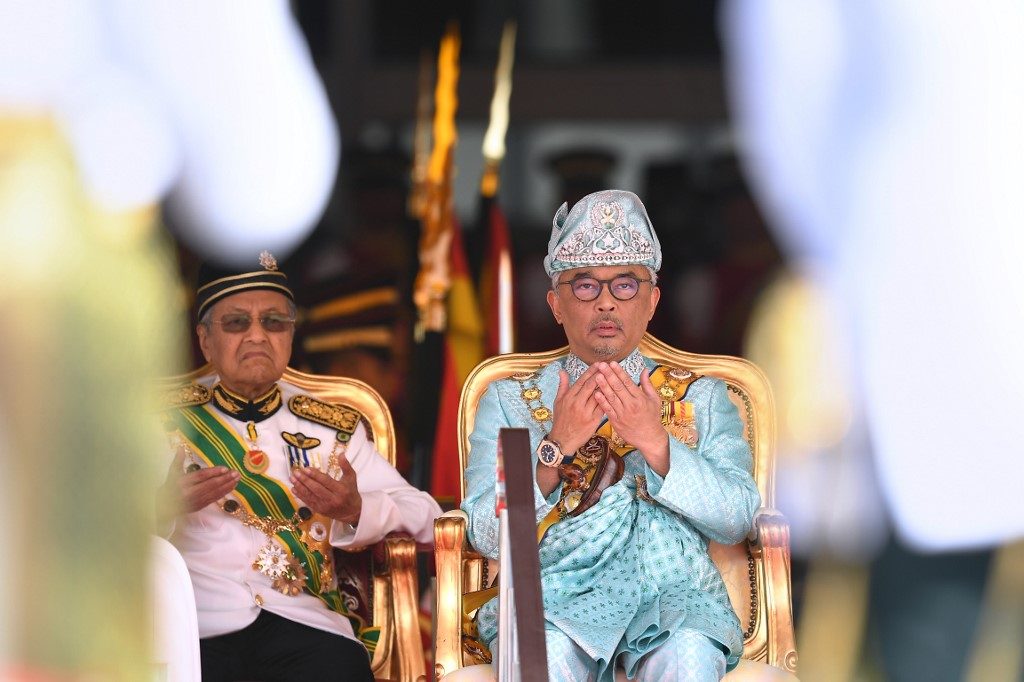 Facebook Twitter Copy URL
Copied
He rejects Mahathir Mohamad's plan to convene parliament to vote on the country's next prime minister, after it was widely criticized as against the constitution

KUALA LUMPUR, Malaysia – Malaysia’s king struck down Friday, February 28, a power play by 94-year-old Mahathir Mohamad aimed at seizing momentum in a political crisis, capping a week of turmoil that has left the country effectively leaderless.

He rejected Mahathir’s plan to convene parliament to vote on the country’s next prime minister, after it was widely criticized as against the constitution.

Old foes Mahathir and Anwar Ibrahim are locked in a power struggle sparked by the elderly leader’s resignation and their ruling coalition’s collapse, following a failed bid to push out leader-in-waiting Anwar.

The men had reconciled and led their coalition to victory in 2018 against a corrupt government, but this week’s drama has revived a rivalry that has long shaped the Southeast Asian nation’s politics.

Mahathir, currently interim leader, earlier announced the parliament session would take place Monday, March 2, and the monarch, who appoints the premier, agreed with the decision.

But after a meeting of the country’s Islamic sultans, the king, Sultan Abdullah Sultan Ahmad Shah, said the sitting would not take place, according to a palace statement.

The monarch has met all the country’s MPs this week to work out who they back for premier, but no candidate has emerged with enough support. A candidate must have support of at least 112 MPs.

“The king will continue to strive to find a solution in accordance with the constitution, in the interests of the people and country,” said the statement from royal official Ahmad Fadil Shamsuddin.

Palace officials will now hold talks with the leaders of different parties and ask them to put forward candidates, extending the turmoil and heightening the chances of a snap poll.

The announcement dealt a major blow to the strategy of Mahathir, who has long had a difficult relationship with the country’s royals as he sought to curb their powers during a first stint as premier from 1981 to 2003.

The party of Mahathir – at 94 the world’s oldest leader – said it was nominating Muhyiddin Yassin. It signalled Mahathir was giving up on returning as premier himself but wanted an ally in the role.

The former ruling coalition meanwhile said it was nominating Anwar, 72.

The men’s stormy relationship dates back to the 1990s when Mahathir sacked Anwar as his deputy, and he was jailed on dubious sodomy charges. – Rappler.com