Feb 29, 2020 2:48 PM PHT
Agence France-Presse
Facebook Twitter Copy URL
Copied
All Catholic masses are suspended indefinitely in the city-state. Catholic leaders have instead been providing pre-recorded services for the faithful to watch or listen to at home via YouTube or church radio. 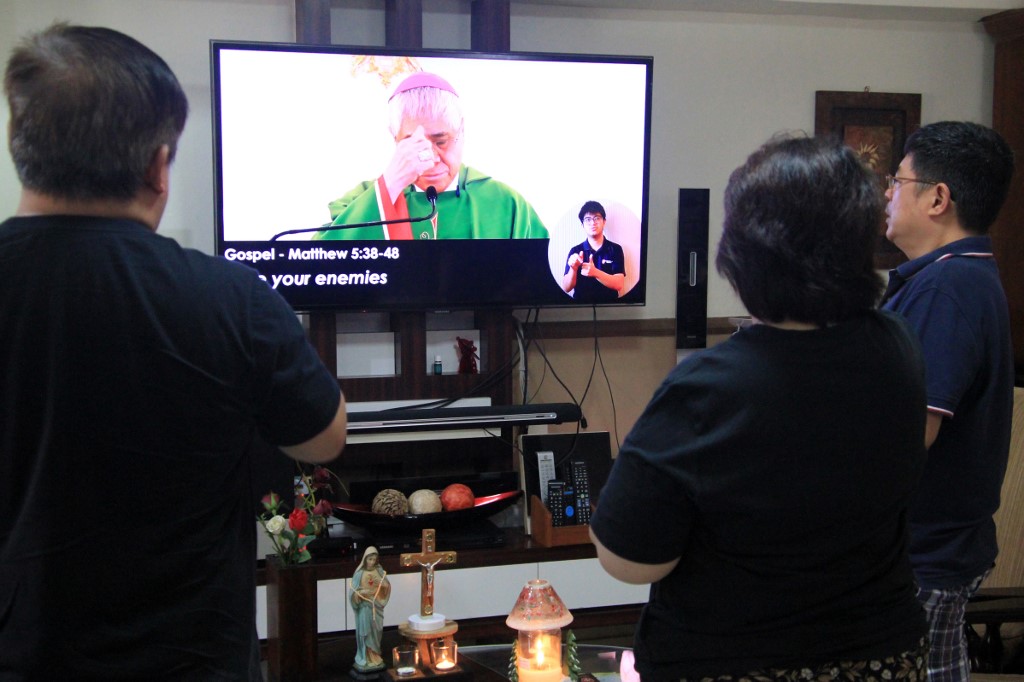 SINGAPORE – Roman Catholic couple Rizaldy and Marissa Sapiera long to go back to church on Sundays in Singapore but for now, they must hear pre-recorded masses at home due to the deadly coronavirus.

The virus has killed over 2,700 people and infected tens of thousands in China and is now spreading around the world, with outbreaks appearing in other parts of the world.

Singapore has been relatively hard hit, so far reporting more than 90 cases. Two clusters of infections, including the city-state’s biggest, have been linked to churches.

All Catholic masses have been suspended indefinitely in the city-state, and Catholic leaders have instead been providing pre-recorded services for the faithful to watch or listen to at home via YouTube or church radio.

Rizaldy and Marissa Sapiera, a Filipino couple who are Singapore permanent residents, have opened their apartment on Sundays for friends to hear a pre-recorded service, beamed on a large smart television into their living room.

During a mass at their home on a recent Sunday, they sang, knelt, and listened to the sermon, as they normally do in church.

“We are praying very, very hard that hopefully this virus problem will be resolved as soon as possible,” said Rizaldy Sapiera

At the Roman Catholic Church of Divine Mercy near their home, the doors were locked and no one was in the lobby. A look inside revealed rows of empty pews.

Most non-Roman Catholic churches have remained open but Sunday attendance has visibly fallen and measures like temperature checks and sanitising of hands have been implemented.

At the Heart of God Church, which has a 4,000-strong congregation of mostly young people, gatherings have been broken into smaller groups.

At one such gathering, held in a small side room of the church, about 15 members sang along and swayed with hands in the air while watching a video taken during a previous weekend service.

“When it’s darkest we need to shine even brighter… One of the things we can bring to the community is a sense of hope, a sense of love and a sense of faith,” Pastor Garrett Lee told AFP. – Rappler.com