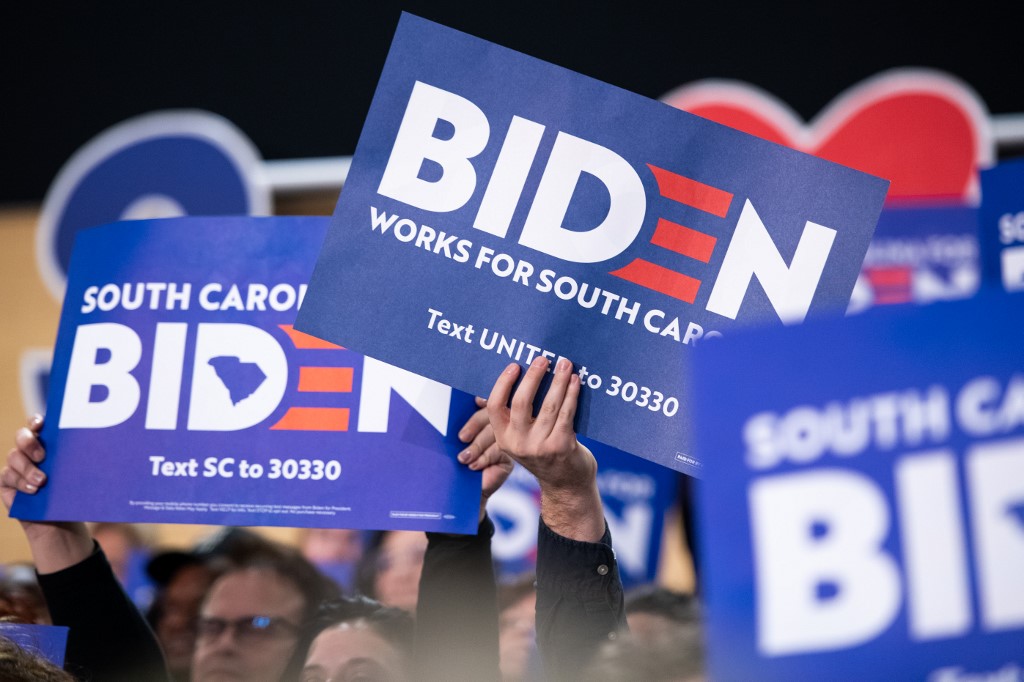 COLUMBIA, USA – Voters headed to the polls in South Carolina on Saturday, February 29, for the 4th contest in the Democratic presidential nomination race, with Joe Biden looking to salvage his flagging White House hopes with a big win.

The former vice president is the firm favorite in the first state with a substantial African-American Democratic electorate to weigh in – but trails far behind frontrunner Bernie Sanders in nationwide polls.

Both candidates will have a better picture of their overall prospects next week, when 14 states cast ballots on “Super Tuesday” – and a third of the delegates who formally choose the Democratic candidate to face President Donald Trump in November are up for grabs.

Biden – the onetime race leader who failed to notch a win in Iowa, New Hampshire or Nevada – said he hopes South Carolina will propel him into national contention.  (READ: Democrats make final pitch in Iowa hours before first U.S. vote)

“I’ve worked hard to earn these votes, and I think I’ll do well,” the 77-year-old told CNN on Friday.

“It’s been the launching pad for Barack and I believe for me,” Biden added, referring to the nation’s first black president and his boss for eight years, Barack Obama.

Biden leads in state polling, a dozen points ahead of Sanders and 20 points up on billionaire activist Tom Steyer, who is gunning for a third-place finish.

At one polling place in a suburb of the state capital Columbia, about 20 people were lined up at 7:00 am when the doors opened. In the first hour of voting, a steady stream of voters waited.

For 67-year-old retiree Samantha Rogers, who is black, Biden is the right candidate to take on Trump.

“He’s more experienced. He’s for all people, not just African Americans. He’s for everyone,” she told Agence France-Presse.

But for 21-year-old student Andrea Green, “Bernie is telling the truth. He’s authentic.”

Sanders is dominating there with 32.5 percent support, according to the RealClearPolitics polling average, with fellow progressive Senator Elizabeth Warren second.

Biden is a distant third with just 12.5 percent, in danger of missing the 15 percent threshold for earning delegates from the state.

Sanders has eclipsed Biden in Texas, the other big Super Tuesday delegate gold mine, and expanded his lead there after a CNN poll showed him ahead of Biden by six points.

The senator also tops polls in Super Tuesday states Colorado, Maine, North Carolina, Utah, Virginia, his home state of Vermont and Warren’s Massachusetts. Some of the races are tight.

With several Democratic establishment leaders fretting that Sanders could hold an insurmountable delegate lead after Tuesday, some have begun openly sounding the alarm.

Senator Tim Kaine of Virginia, the 2016 vice presidential nominee, endorsed Biden on Friday, tweeting that “Joe has exemplary heart, character, and experience” to be commander-in-chief.

South Carolina congressman James Clyburn, an influential black lawmaker who has endorsed Biden, warned of “down-ballot carnage” if the Democratic nominee is seen as too radical.

With party grandees desperate for a moderate to halt Sanders, the frontrunner punched back to say his campaign is best positioned to win.

“One of the things the establishment is doing is, they’re saying, ‘Bernie can’t beat Trump,'” Sanders told a crowd in St. George, South Carolina.

He pointed out that over the country’s last 60 head-to-head polls with the incumbent, “we’re ahead of Trump in 56 of them.”

Sanders said his campaign will triumph “because we have an agenda that speaks to the needs of working-class people.”

Rivals have mounted a fusillade of attacks against Sanders.

Among them were ads slamming his gun rights voting record, aired by former New York mayor Michael Bloomberg, who skipped the first four states in favor of making a splash on Super Tuesday.

The centrist Bloomberg, a billionaire media tycoon, has pumped a record $500 million into advertising, leading rivals to accuse him of seeking to “buy” his way into the race.

Buttigieg has warned that Sanders would be too “radical” a nominee, while Biden suggested the frontrunner would get trounced by Trump in southern states.

“Do you think running as a socialist would help you in Georgia, in North Carolina?” Biden said on CNN. “In South Carolina? In Texas?”

Trump put his own thumb on the scales Friday, at a rally in South Carolina.

“While we’re building a great future, the radical Democrats are trying to burn it down,” he told the crowd.

Trump concluded that the race was “down to two candidates: crazy Bernie and sleepy Joe,” adding that it was time for Bloomberg to throw in the towel and “go home.” – Rappler.com